The Waltemath Foundation is a non-profit foundation in Hooper, Nebraska established by the abstract painter Joan Waltemath. Based in New York but born and raised in Nebraska, Joan bought the building on the corner of Main Street as a place to paint — the ceilings were tall enough to fit the 14-foot paintings she was developing at the time. The project quickly evolved into a place not only to work, but also to show art, engage with the local community, and contribute to the longevity of the small agricultural town, while becoming a kind of pilgrimage site for the extended art community.

The architecture of the project, designed by Ballman Khapalova, takes the form of six programmatic clusters — stage/display, utility, cooking, resting, cleansing/changing, storage — and the spaces that are formed between them (gallery, gathering, working). Each cluster is conceived of both as an independent structure and as a portion of a larger field. The entire building can function as a gallery and public space, with the most private function of sleeping contained in a single small volume on the second floor. 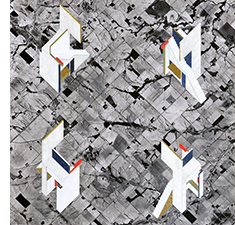 Conceptually, the projects has two points of origin: the surrounding agricultural landscape of the Jeffersonian grid, and a grid internal to the building itself that results from a relationship between its window openings and columns. Through a process that overlays and interweaves these two conceptual elements, the intent was to tie the building to the land through architectural language and spatial distribution, dealing primarily with the variations and permutations that occur as an ideal grid meets real conditions of nature, program, and material. 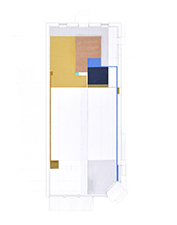 The drawings presented here are a record of a design process that sought to position the project within and connect it to the surrounding landscape. The initial drawings are site drawings, locating the project within an ongoing dialogue among the land, the Jeffersonian grid, and Hooper’s town plan (see Gallery 1). The drawings seek to establish a common language across these scales. Next, the cluster drawings and interior elevations show, in two- and three-dimensions, the formal language and spatial organization of the individual interior spaces and their relationship to the agricultural (see Gallery 2). The floor plan drawings show different ways that the clusters are arranged and tied to the building’s internal grid, and different spatial relationships that are created between clusters. The models present the individual clusters fully in three dimensions, and the interior renderings represent the space between clusters from the inhabitant’s point of view (see Gallery 3). 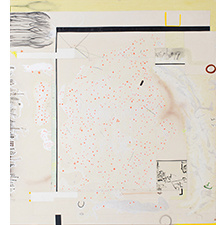 As a living gallery, the space was designed to create a three-dimensional, harmonic environment for Joan’s paintings that resonate with daily life in the building and beyond. However, the design process did not originate in her work. As documented here, a spatial language arose from the analysis of the land and the existing building that, over time, began to resonate not only with Joan’s work but also with the principles and process through which she creates it (see Gallery 4). Included in this exhibition are paintings from three different periods of her work, each utilizing different techniques for making space with harmonic progressions.

The project is currently under construction.

On Friday, March 5, Peter Ballman joined Joan Waltemath for an online conversation at The Brooklyn Rail. A recording of the conversation is available here.