John Hejduk graduated from the the Cooper Union for the Advancement of Science and Art in 1950. In 1964 he returned to the institution to teach in the School of Art and Architecture. In 1975, he became Dean of the School of Architecture, where he developed the school's renowned pedagody for the next 25 years. In Hejduk's words: 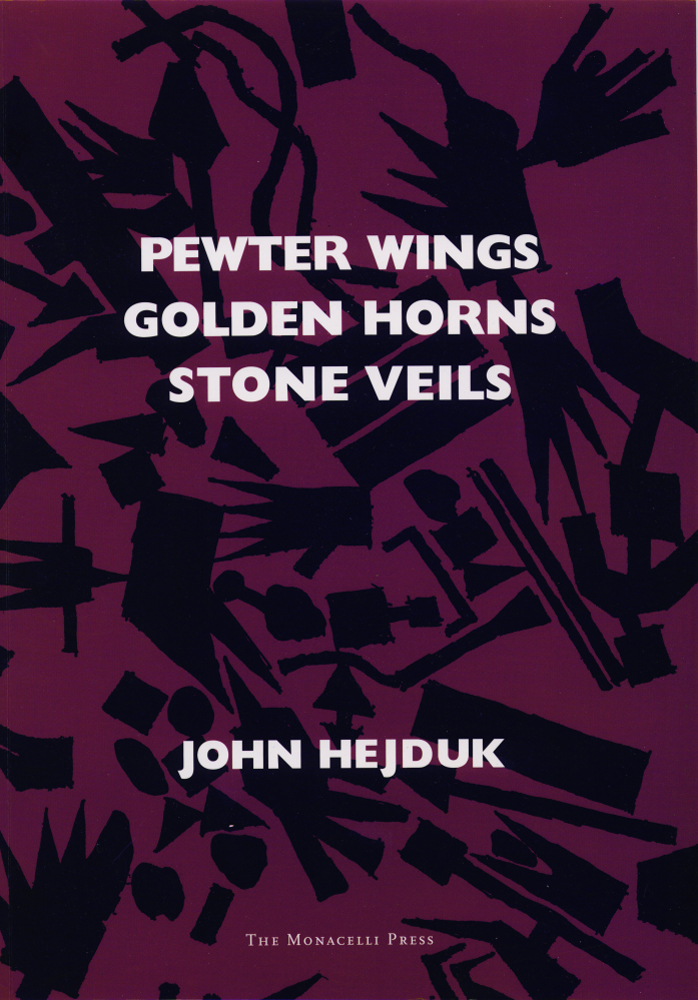 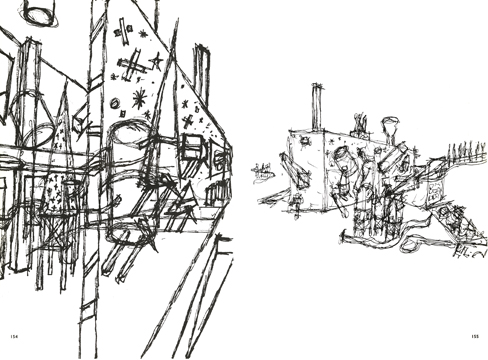 An architectural journey traversing a mental/physical landscape of architectural sites, churches, chapels, and cathedrals. The landscape was developed out of the influence of Spain on the architect. Framed in seven chapters: Crossings, Sites, Rituals, Wedding in a Dark Plum Room, Sacraments, Testaments, and Journeys; the book is scripted with water colors, ink drawings, and texts. The narrative unfolds between framed views, reading space, drawings, and texts that have formed a solid. 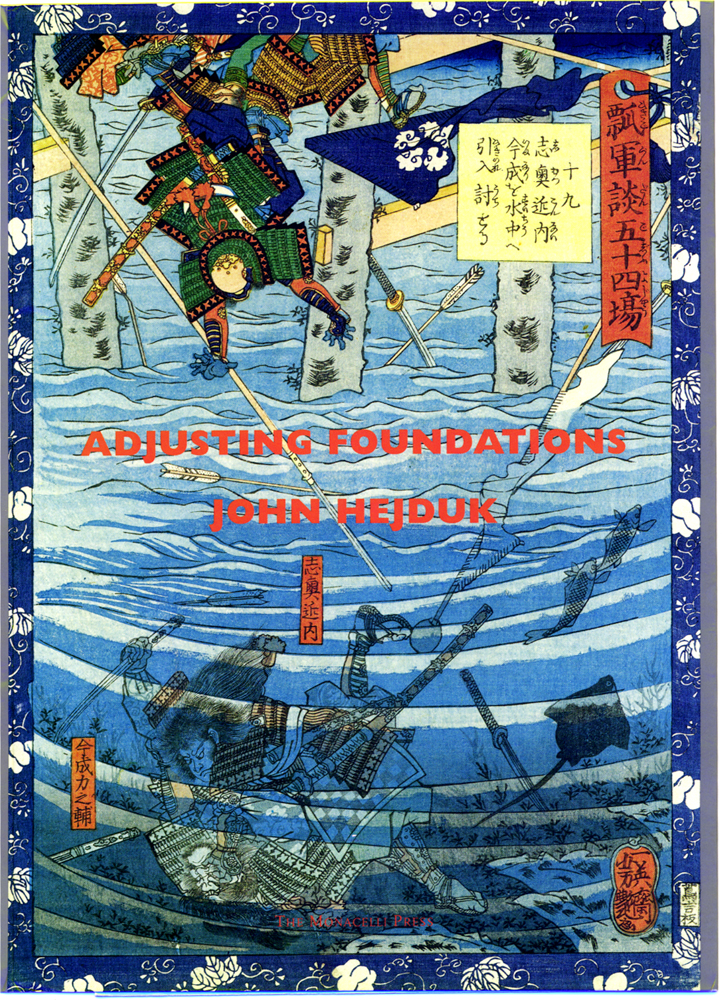 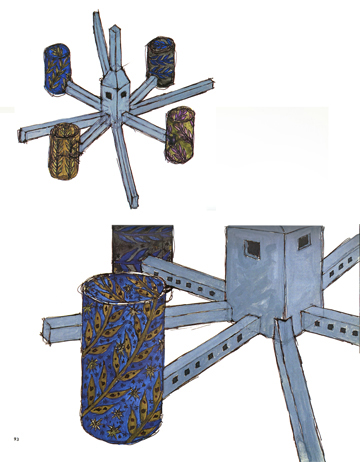 Hejduk’s subject is a reconcillation—between East and West, art and architecture, humans and nature. He was inspired by the revelation that not only had the Impressionists known Japanese prints, but the Cubists had also come under their influence....Neither architectural monograph nor exhibition catalog Adjusting Foundations is complete unto itself. In every sense it is a built work. Better still, it is architecture that each and every one of us can hold.
—Ellen K. Popper

In Hejduk’s rich series of watercolor paintings, each one is cubist in spirit, an assemblage and celebration of color and form. These explorations produced sixty-one projects, including serpentine structures, secret spaces, houses constructed of horizontal and vertical mazes. Cemetery for the Ashes of the Still Life Painters, the Suspended Punctured Roof.

Designed by Kim Shkapich, received a 1996 International Architecture Book Award from the American Institute of Architects. 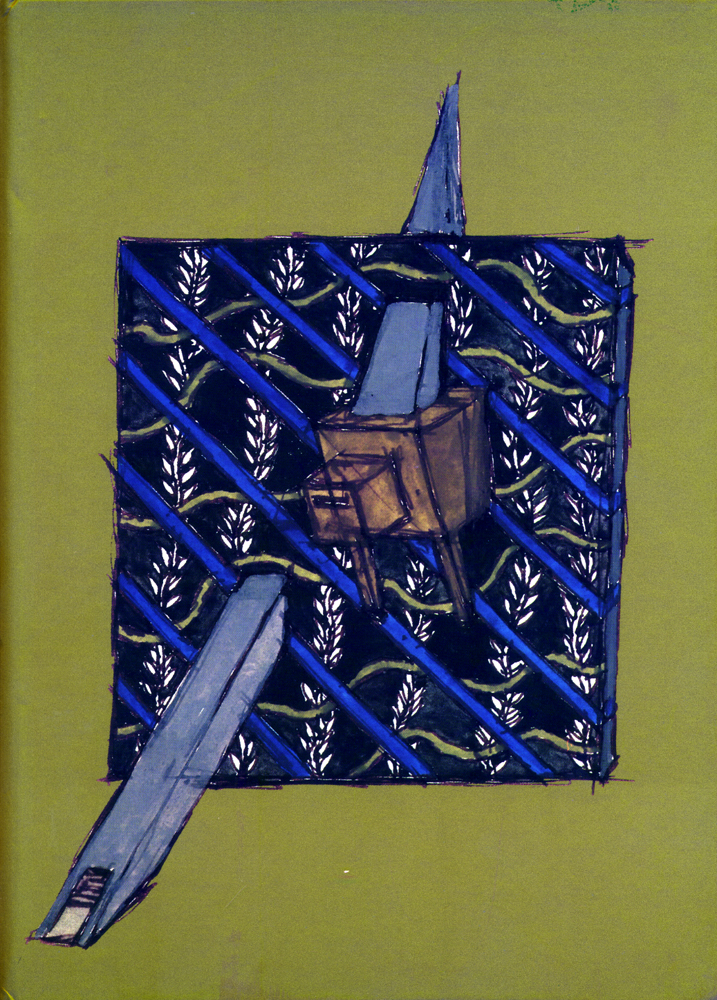 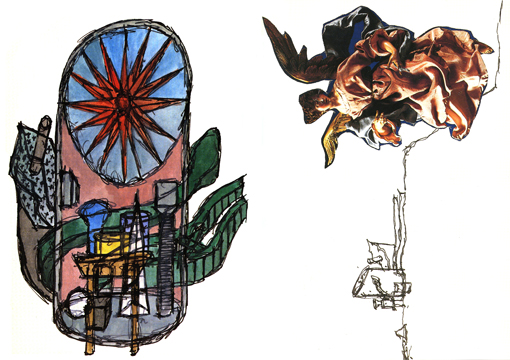 A reproduction of one of the architect’s personal sketchbooks this beautiful volume contains fifty-two drawings and collages that explore the passage of time and the possibility of a tender architecture. The thoughts and drawings in this book were made in the month of January, 1994, Hejduk explains, I wanted to make two architectures in love . . . to have architectural intercourse on every level...chromosomic exchange.

The drawings are explained in his essay Sketchbook Notes, and Still Life/Dead Nature elucidates his thoughts about space. 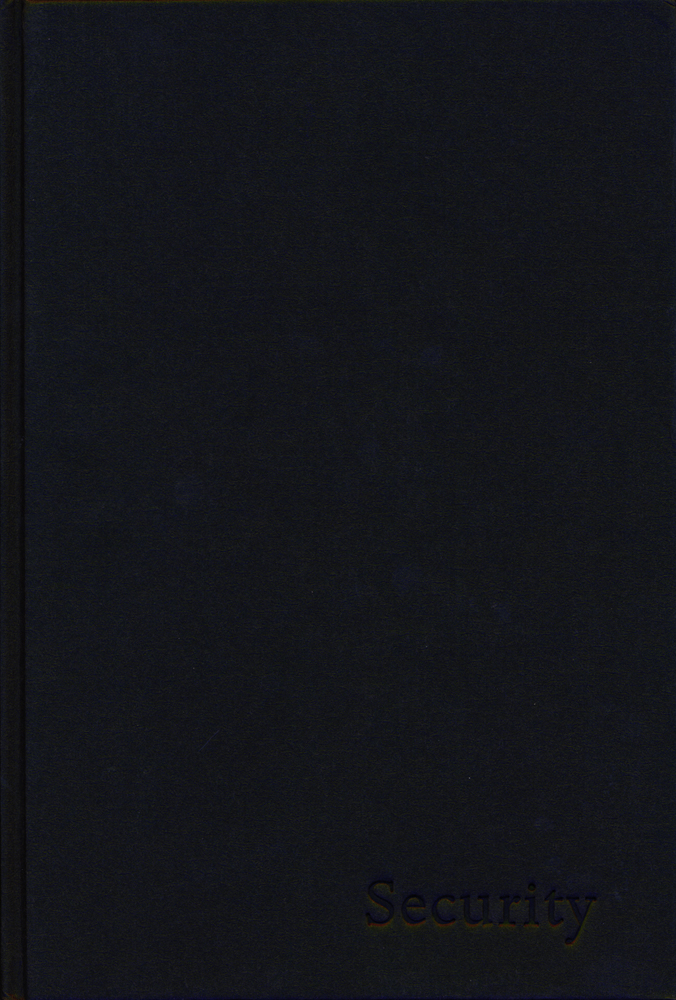 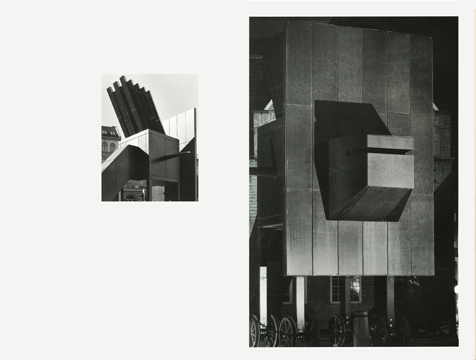 John Hejduk is spiritually the most building human being I have ever met. His every thought, his entire poetic world, is expressed with the precision of the working drawing.
—Sverre Fehn

Published to document the 1989 construction of John Hejduk's 'Security,' (a structure from Victims, designed for the city of Berlin) by a group of architects, teachers and a student class of the Oslo School of Architecture within Christiania Square, Oslo’s first city square of 1630. At that time it was the city’s center, surrounded by the city hall, hospital, and cathedral. To the southwest is Akerhus fortress which dates to the early thirteen hundreds, that became the headquarters of the Nazis during the German occupation from 1940 to 1945. This history made the site an apt locus for Security’s many conceptual layers.

This bilingual edition featuring essays by Sverre Fehn and Astri Than, with poems by David Shapiro. Photographic essays by Annette Faltin and Hélène Binet. Designed by Terje Langeggen/Krasis, Oslo. 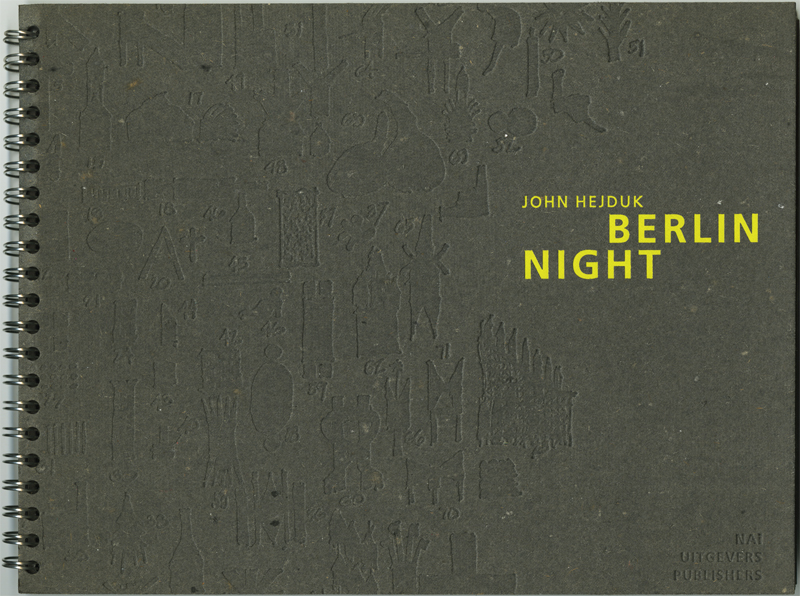 Hejduk leads us into the space of amazement and imagination–the chora of poetic thought, the liminal space of the feast and the game.
—Wim van den Bergh

For an American architect John Hejduk's architecture is a world of history, emotions, practical ingenuity and visions of the future. In his view, new buildings too must be the bearers of inspiration and narratives. He gives voice to this contention with extensive explorations and peerless sign language. The essay with which the publication opens, by the dutch architect Wim van den Bergh, indicates how Hejduk's work leads to the essence of architecture.

Published to coincide with the opening of the new building of the Netherlands Architecture Institute. The exhibition Verschoven Fundamenten/Adjusting Foundations, The Work of John Hejduk, Architect was opened on this occassion, among others. 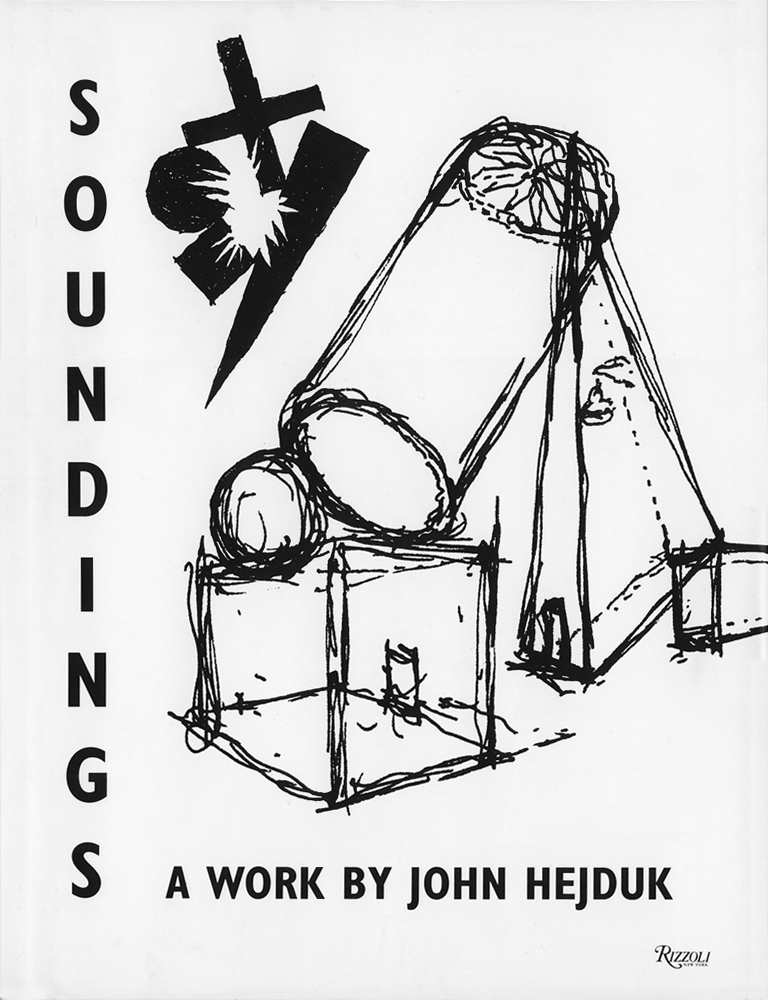 Stark, astringent, and stunning—filled with vivid forms and sensous language—Soundings is an examination of architecture’s naked heart from a visionary in the practice. By sounding the depths, uttering or interpreting, Hejduk takes a radical look at the nature and purpose of architecture, showing how every component of the built world derives from our most rudimentary understanding of shapes, matter, movement, and stillness. The architect explores the concepts behind seventy-three projects for a wide range of building programs, produced since 1990, including the Library for Books on Heaven and Hell and the Institute for Perspective Investigations. The reader is asked to associate ideas and images, attaching and detaching forms to concepts in the service of the architectural process and we’re reminded how architecture is not merely a technical, self-contained trade but a mode of expression intimately linked to our deepest desires, ambitions, anxieties and fears. This volume completes Hejduk’s trilogy. 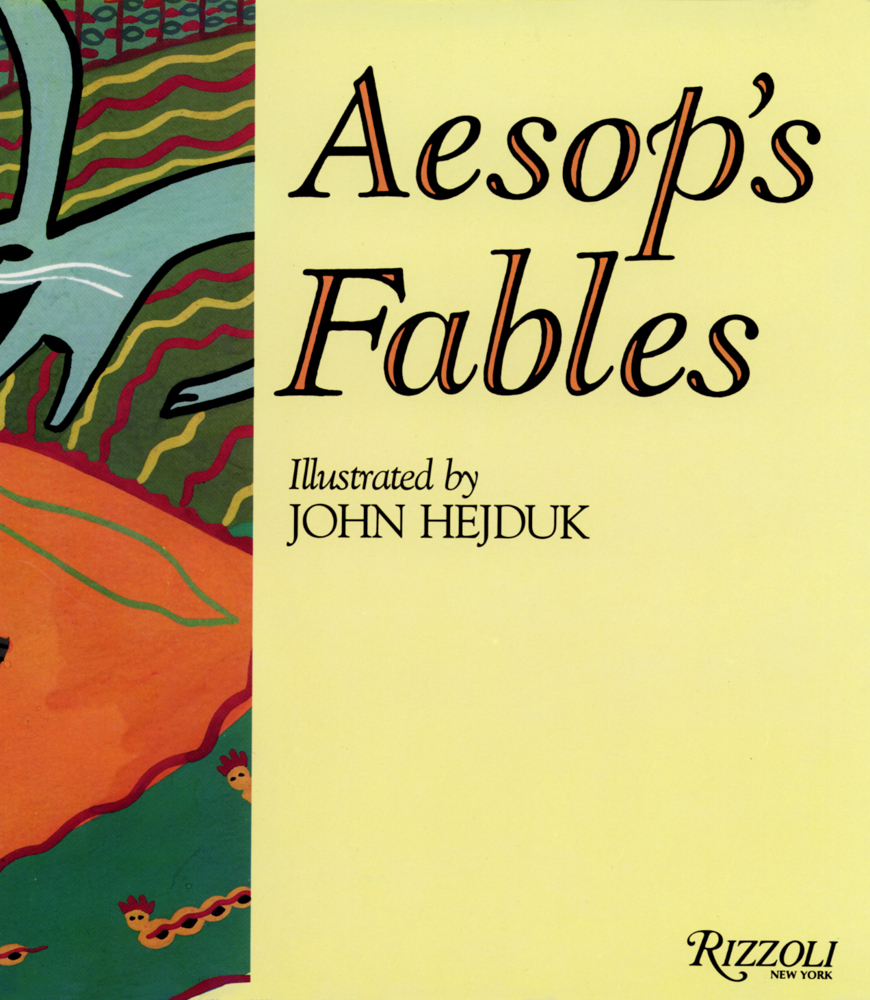 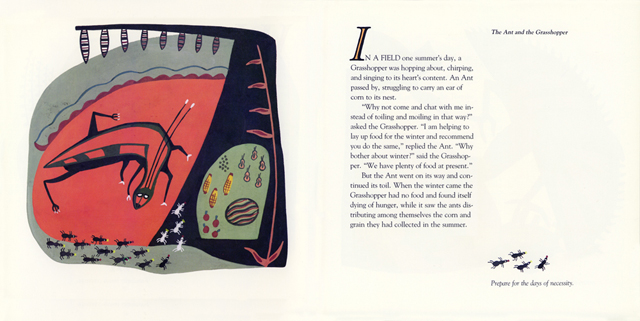 The Frogs were living as happy as could be in a marshy swamp that just suited them. They went splashing about caring for nobody and nobody troubling with them. But some of them thought that this was not right, and they should have a king.
—Joseph Jacobs

Including such fables as The Frogs Who Desired a King, The Fox and the Cat, The Town Mouse and the Country Mouse, and The Hare and the Tortoise, this collection of Aesop’s Fables features 29 full-color illustrations by John Hejduk. These vibrant tempura illustrations, painted in 1947 while Hejduk was a student at The School of Architecture of The Cooper Union, beautifully complement 14 of Aesop’s timeless fables and are presented here in full-color in a hardcover edition by Rizzoli. 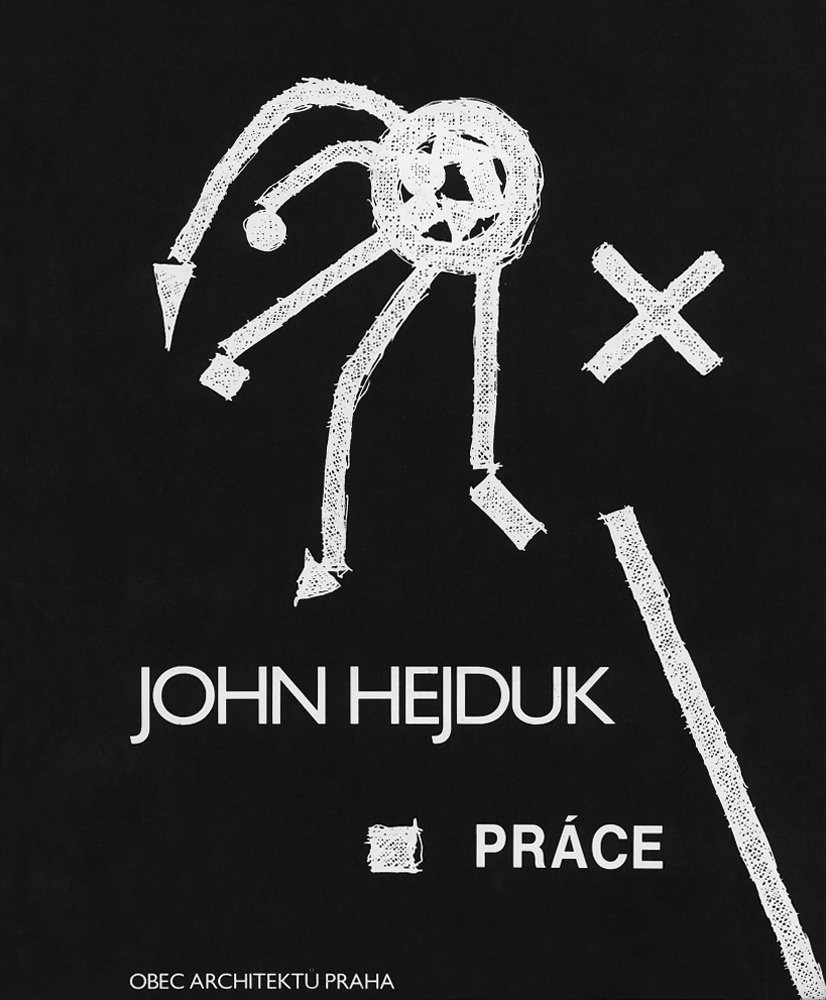 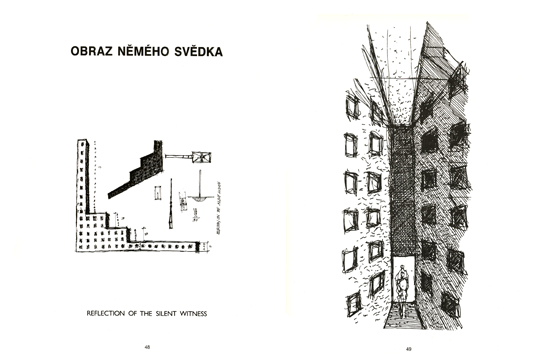 Published and produced in Czechoslovakia in conjunction with the dedication of his structures 'House of the Suicide' and 'House of the Mother of the Suicide' in the Prague Castle Royal Gardens and two exhibitions: John Hejduk, Practice andRelatives, photographs by Hélène Binet from September 6 to October 20, 1991. This bilingual book contains selections from projects previously published in other sources: Wall House 1, Victims, Reflections of the Silent Witness.

This book is a strange hybrid of content and design, for the serious collector of Hejduk’s books. 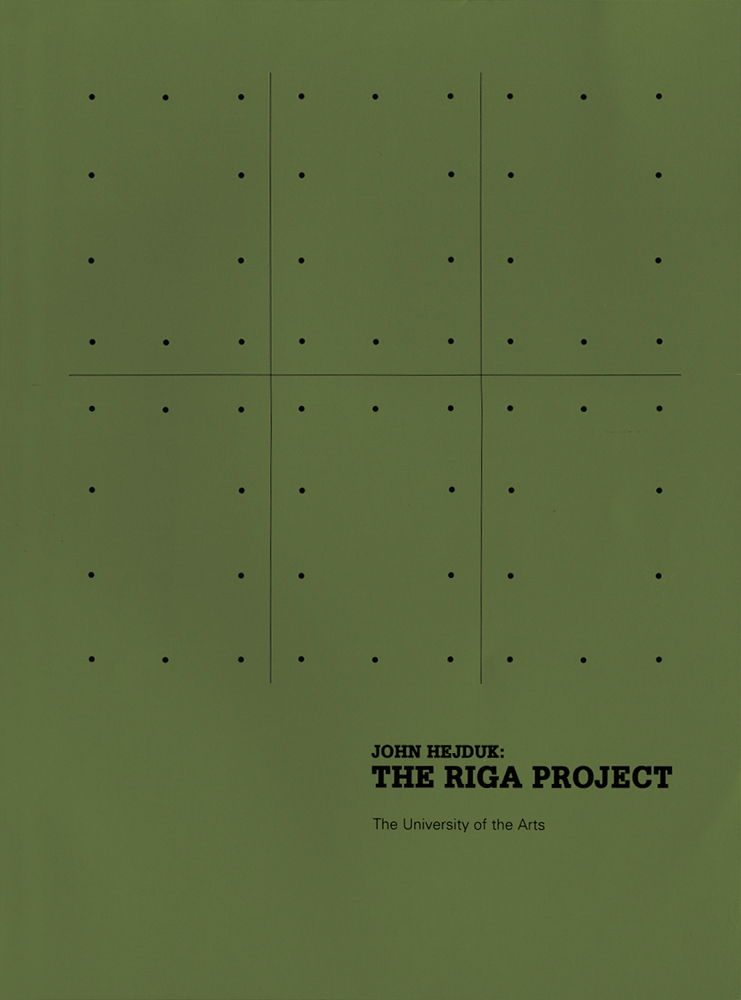 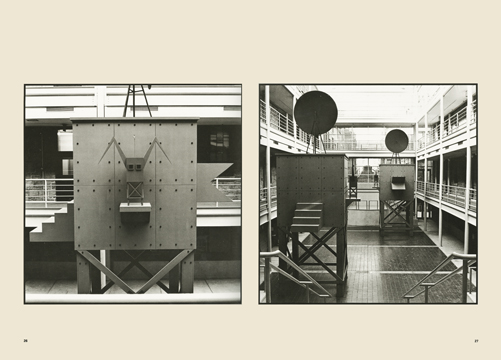 These two structures belong to the complementary side of the role of architecture, the one that we always forgot: to shelter our dreams and the mystery of our presence here.
—Meton Gadelha

Published to document the 1987 construction of John Hejduk’s "Object/Subject" structures by the Department of Architectural Studies at the University of the Arts; "the first actual building based on the architect’s then unpublished book, Vladivostok; the first of the architects special projects to be built in the United States; and all of this happening in the center of Haviland Hall, an early 19th century building, itself conceived as utopian architecture." This book contains the architect’s preparatory drawings for the two structures, and documents their construction in a timeline format. The opening night performance Crooked Lightning by Connie Beckley, and The Fall of Guilt, a response to the project conceived and choreographed by faculty and students from the School of Dance are included. 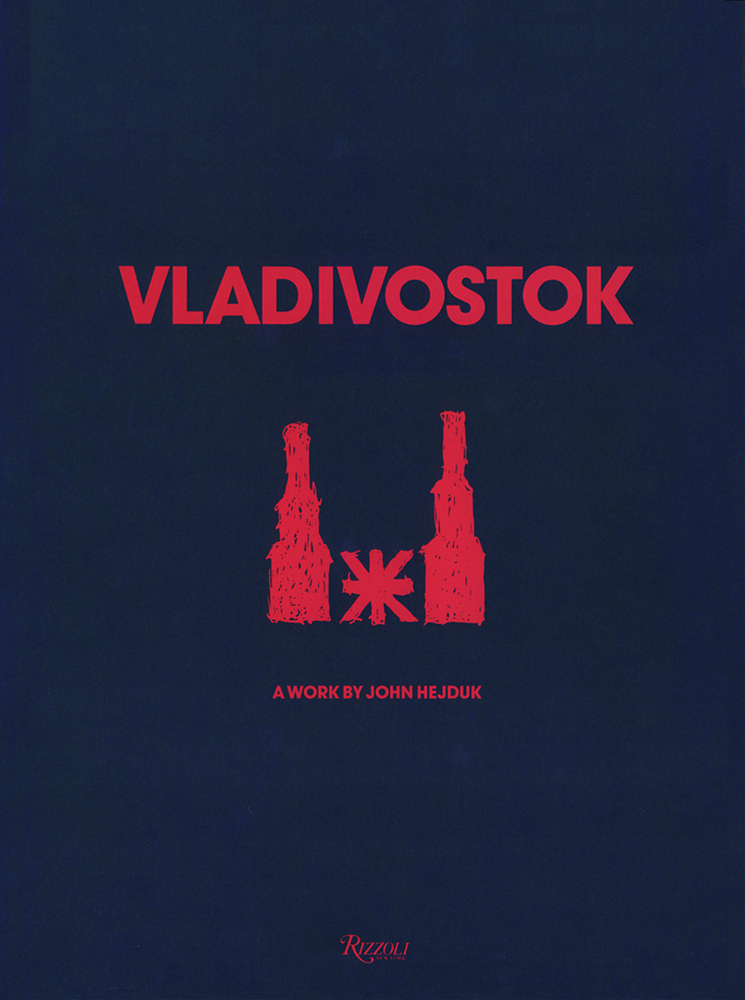 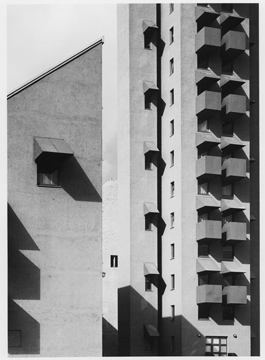 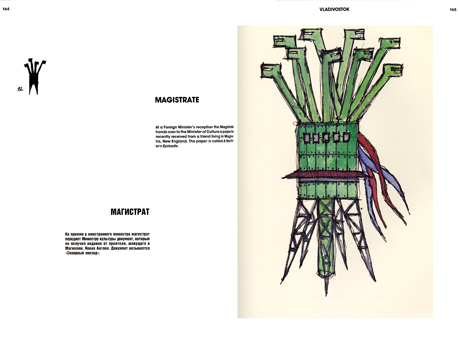 Designed as a dictionary to read the architectural drawings that track a ten-year eastern journey from Venice and Berlin to Prague; from Riga, Lake Baikal, to Vladivostok on the Sea of Japan, this is the second volume of John Hejduk’s trilogy.

The reader is introduced to the cast of iconographic sketches named in English and in Russian. These icons identify the architectural subject within the frame of the drawing in order of appearance. A text introduces each structure within the masque of the book, incorporating fiction, expository writings, descriptive prose, and poetry, until text runs out and the icons become words.

These projects are a new a approach to urban form—an intensive investigation of programs that are a catalyst for an architecture deeply concerned with the metaphysics of objects and subjects, and their associations with a place.

The projects include designs for such structures as The Museum for the Preservation of Icons, Buildings of the Informers, The Ministry of Culture, among others.

Designed by Kim Shkapich, this volume received the Golden Letter and Medal for The Best Designed Book in the World from the Leipzig Stiftung Buchkunst, Germany. 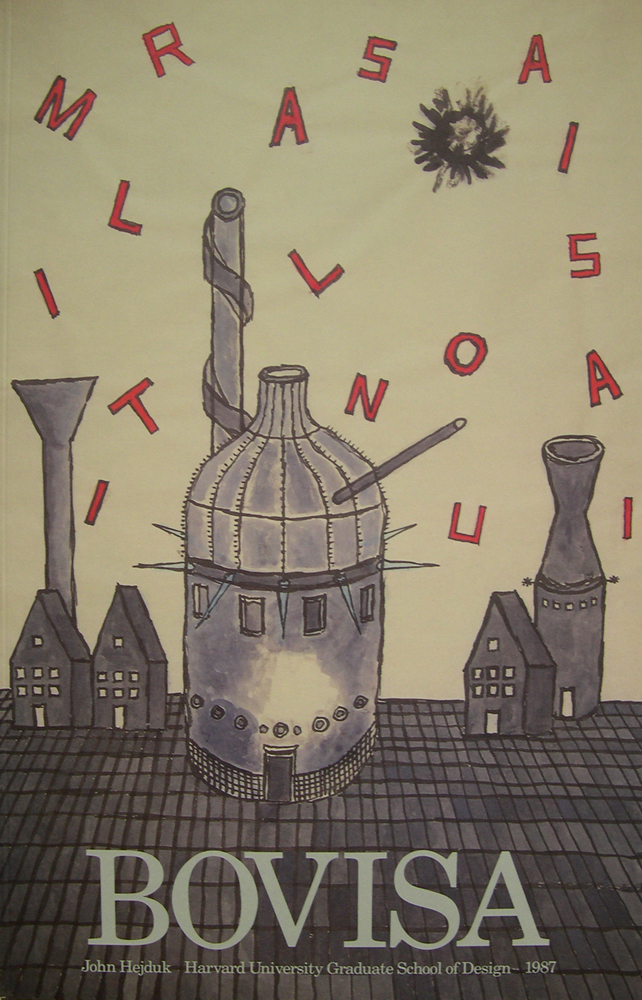 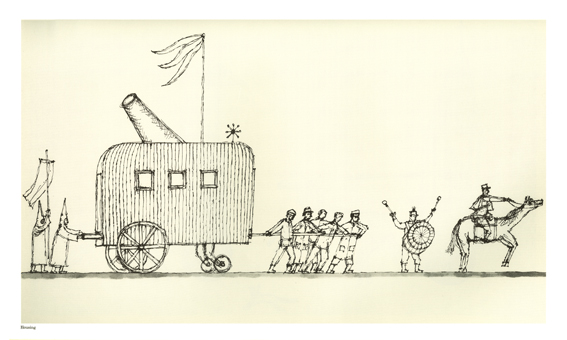 Published in connection with an exhibition of work by John Hejduk, the Eliot Noyes Visiting Professor of Architecture, at the Gund Hall Gallery, Harvard University in the Fall of 1987. Introduction by José Raphael Moneo. Designed by John O’Connor. 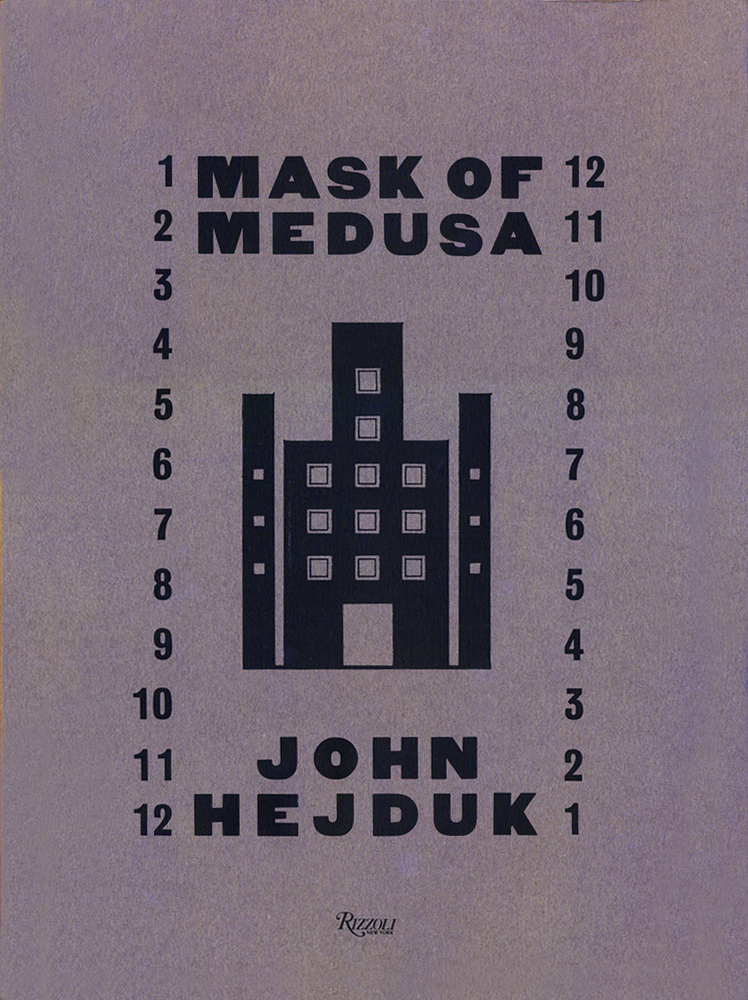 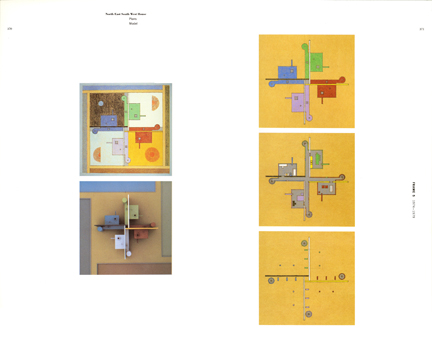 The first major book of the architect is an encyclopeadia of his works between 1947–83, framed in time. Hejduk’s work and thought is introduced by the voices of the first section; interviews with Don Wall and Peter Eisenman, essays by Franz Oswald and Richard Pommer, and excerpts from literature that have informed his work—in counterpoint—to the voice of the architect over time. Hejduk’s texts written at the time of the projects, and those written contemporanous to the production of the book, looking back, harmonize with his prose pieces and poems, revealing a body of work and methodological thought.

One crosses over on pages 158 through 160, as table of content and index to the second section which chronologizes eighty-two projects in hundreds of drawings, among them the Texas and Diamond Houses, the Wall Houses, the Italian projects and the early masques.

Constructed to be read at random, or chapter by chapter as a linear account, the reader can always locate oneself in time to the architect’s work.
Introductions 1984 & 1978 by Daniel Libeskind.
Designed by Lorraine Wild. 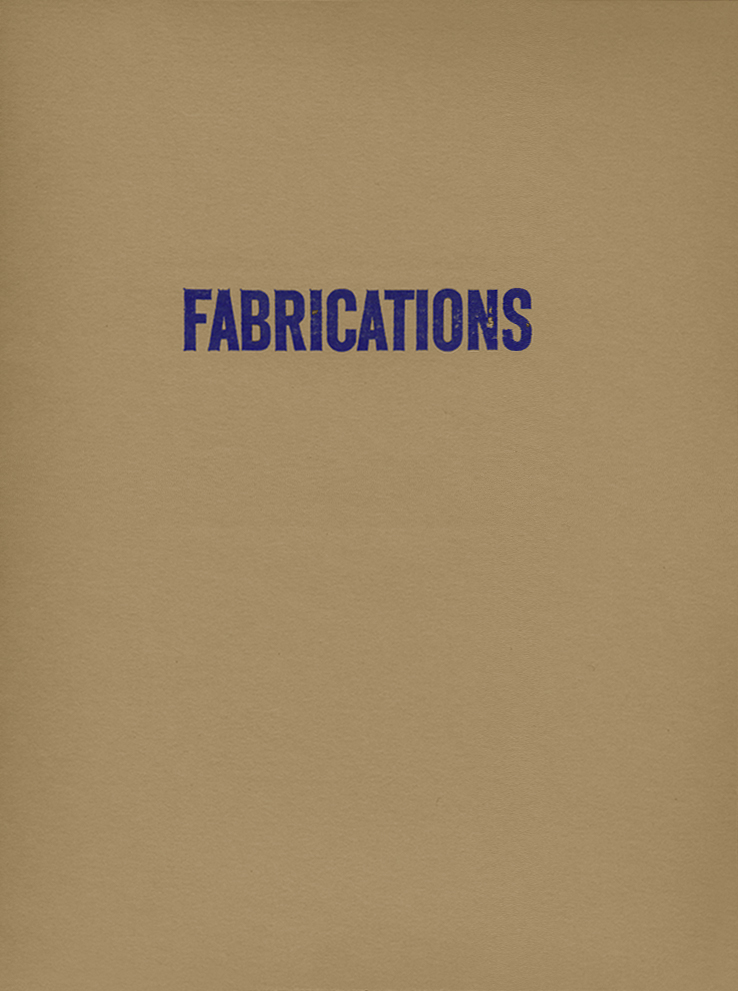 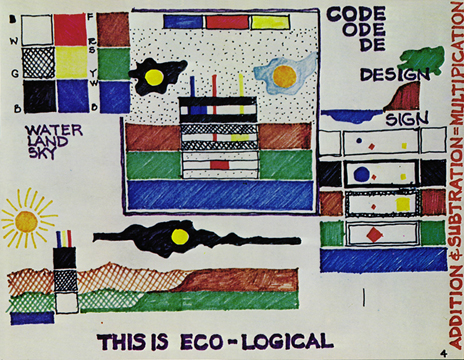 A collection of twelve Wall House projects by architect John Hejduk printed in color on eight by ten inch cardstock in a paper portfolio. Limited to an edition of 1000, was funded by the Mary Duke Biddle Foundation, and continues the "tradition of commitment to search for new relationships of forms—in our opinion the only possible, as well as necessary role of a school of architecture." 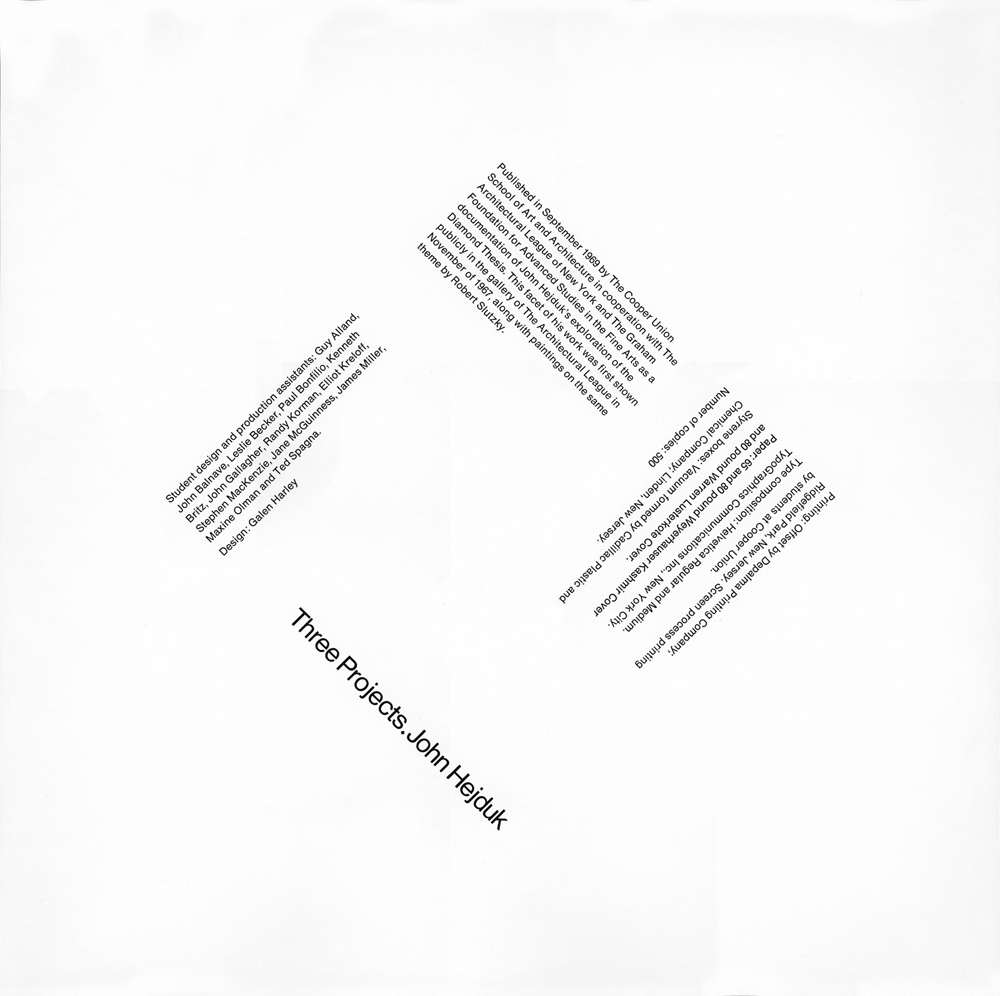 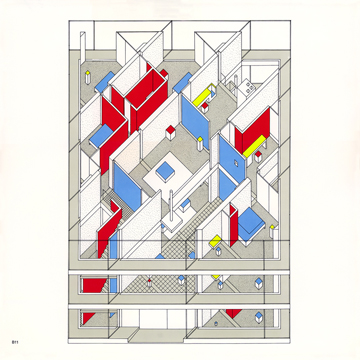 In his introduction George Sadek writes, "The Diamond Thesis by Professor Hejduk is both creative and analytical. It imples new points of view in architectural space. It delineates with clarity the frontal facet of isometric projection in the two-dimensional space of the picture plane of the drawings. This didactic aspect of the Thesis has challenged the students who in turn have advocated its publication.

Persons, places, and particular times act as provoking forces upon a work. Ideas do act as that substance which holds a work together and makes it evolve. After the ochre light of Rome (Fulbright, 1953) the sharp intensity of heat and light in the Southwest made for precision. The Diamond genesis was somehow already inherent in that sparse landscape. Through the argumentation and associations of Colin Rowe, Bernhard Hoesli, and Robert Slutzky, during their stay at the University of Texas, architectural positions, form positions, and spatial positions began to develop. The dialogue of persons and places continued during Professor Hejduk's years at Cornell and at Yale and found its final position at Cooper Union. The idea has come full circle."

This portfolio contains Hedjuk’s Diamond Houses A and B, as well as the Diamond Museum that were exhibited in the gallery of the Architectural League in November 1967. The Diamond in Painting and Architecture was a radical exhibition and included paintings of the same theme by Robert Slutzky.

NY: THE COOPER UNION FOR THE ADVANCEMENT OF SCIENCE & ART
IN COOPERATION WITH THE GRAHAM FOUNDATION FOR ADVANCED STUDIES IN THE FINE ARTS AND THE ARCHITECTURAL LEAGUE OF NEW YORK, 1969