This blog will be a growing list of notable Cooper moments. We selected 160 in celebration of this anniversary year, but we know there are many more. Send us yours.(Suggestions may be edited for readability or content.) Please include your full name, and if a graduate, your class and year.

Rosalinda H. Palmer becomes the first woman to receive a Cooper Union diploma, and earns the only Cooper Union Medal awarded that year. The medal was awarded to "such pupils as shall complete the full course of study prescribed by the Trustees, and shall at each examination have received a first class certificate, the Cooper Union medal is given as the highest honor of the Institution," according to the seventh annual report.

Upon presenting the medal to Ms. Palmer, Peter Cooper was recorded as saying:

"The Medals of this Institution, requiring as they do, a thorough course of instruction in all the important branches of positive science, are exceedingly difficult to obtain. This year, the Medal—the highest prize of the Institution— has only been awarded to a single individual, and that person a lady of extraordinary merit.

"The life of the lady who is now to receive this medal, should be written in letters of light. Such a life would show how great and uncommon difficulties can be met and overcome, when all the powers of body and mind are brought into requisition to do the work of an honorable and useful life. Miss Rosalinda H. Palmer, to whom it is now my pride and pleasure to tender this Medal, stands before you, an honor to her sex. (Turning to Miss Palmer,) I now hand you this medal with, I am sure, the best wishes of all present, that you may enjoy health and happiness through life.” 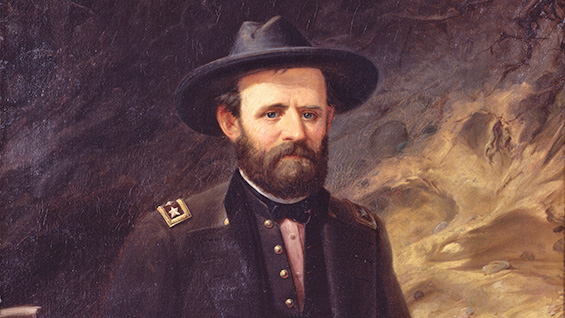 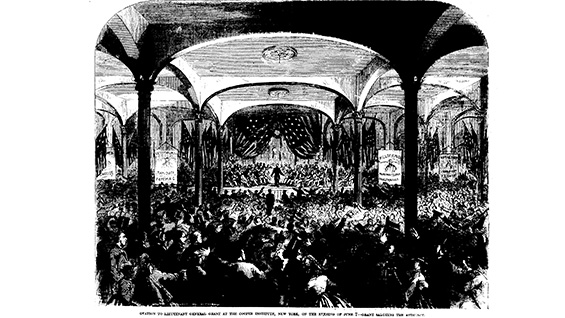 "Of those who entered five years ago, about 1,500 in number, five pupils have passed through the full course of instruction with honor to themselves and credit to the Institution. They are therefore entitled to the diploma of the 'Cooper Union,' and the high honor of being its first 'graduates.' The names and occupations of these young men are as follows:

"When they look back upon the five years of diligent labor through which they have passed, earning their daily bread by honorable daily labor, and giving up their nights to honorable self-culture, they have as much right to be proud of their present position as the Institution is proud of them. Such young men will never disgrace its diploma, and the Trustees introduce them to you as graduates who are sure to fill positions of honor and use­fulness in the world, if they but persevere in the good course which they have commenced. The Trustees have decided to pre­pare and present to each graduate a 'Cooper Union Medal,' which they trust will be as prized and as honorable as the Frank­lin Medal, which in Boston is a sure guarantee of success to the boy who wins it." 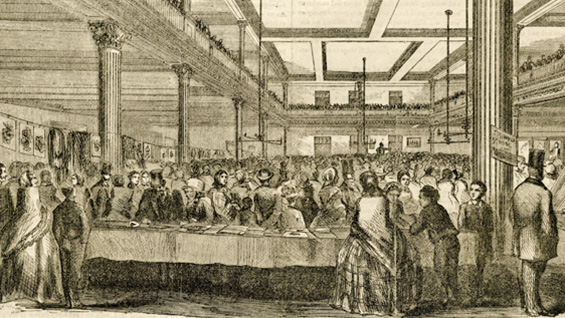 Gathering of pupils from the city's grammar schools in The Cooper Union library, Life Illustrated, January 5, 1859.

In the trustee's Annual Report, published in July of 1864, they describe the popularity of the public reading room, opened in 1859, and how demand is outpacing the holdings:

THE READING ROOM Occupies one entire floor of this building, and is the natural sequence of the free night instruction, for here all classes have unrestricted admission to the current literature of the day, as well as of the past. It is open, free to all, without tickets, from 8 a. m. until 10 p. m. It is supplied with 160 newspapers and 110 magazines, including all the leading publications of this and foreign countries. The number of foreign papers has not been diminished in consequence of the increased cost, the Trustees believing that the rise in gold rendered it all the more important to furnish these papers to those who might not otherwise be able to get access to them. The number of visitors during the year 1863 was 171,873, an average of nearly 600 per day. The Trustees take this occasion to acknowledge from some unknown friend of popular education, a donation of 537 volumes of standard literature, and to say that there is pressing need of large additions to the Library, and that no more acceptable aid can be given to the Institution than by gifts of books in any de­partment of science and literature. The Library numbers about 4,000 volumes, but should be greatly enlarged in order to meet the demands upon it. The Trustees devoted to the Reading Room and Library the sum of $1,736.50, which is as large a proportion12 of their revenue as they can thus apply without detriment to the other departments.