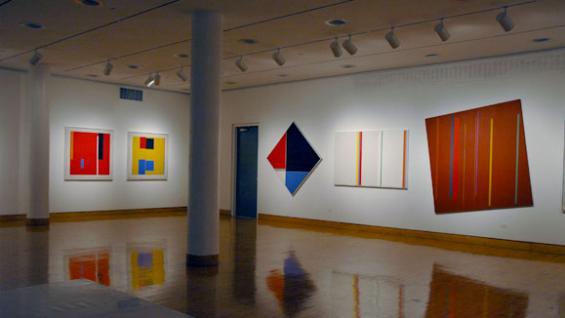 Spectral Emanations celebrated the late painter’s impressive career with a selection of paintings spanning close to fifty years. Slutzky’s explorations of form, space, color and structure within the frame of a square canvas, as well as in theoretical writings like the two seminal "Transparency" articles co-authored with Colin Rowe, reflect a rigorous evolution drawing on the disciplines of painting and architecture and inspired by his love of music.

Robert Slutzky graduated from The Cooper Union in 1951. He then went on to receive an MFA in 1954 from Yale University, where he was a student of Josef Albers as well as Stuart Davis, Burgoyne Diller and Ad Reinhardt. He was subsequently invited to teach at the University of Texas at Austin, joining late Cooper Union architecture dean John Hejduk, Rowe and Bernhard Hoesli in forging a radical new approach to architectural education. Slutzky returned to The Cooper Union to teach in 1968, working closely with Hejduk to frame the renowned pedagogy of that period. He taught in the School of Architecture until 1980, and then in the School of Art for another ten years. He continued to teach at the University of Pennsylvania until three years before his death in May 2005. Slutzky's paintings have been exhibited at the Museum of Modern Art, the Whitney Museum of American Art, the Metropolitan Museum of Art and the Philadelphia Museum of Art. His work can be found in private and public collections throughout the United States and Europe.