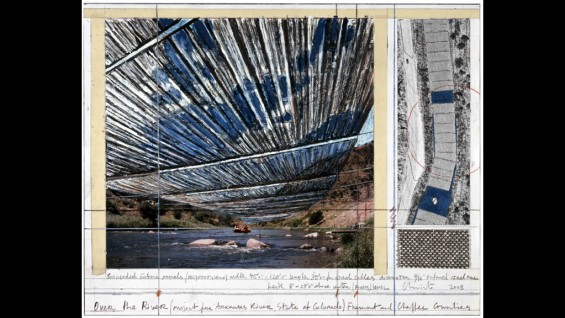 
Christo will present two works in progress: “Over the River, Project for the Arkansas River, Colorado,” which will suspend 5.9 miles of fabric panels over a forty mile stretch of the Arkansas River in Colorado; and “The Mastaba, Project for the United Arab Emirates,” which will consist of 410,000 horizontally stacked, multi-colored oil barrels, forming an oblong trapezoidal monument nearly 150 x 225 x 300 m.

Christo was born in Bulgaria and studied at the Fine Arts Academy, Sofia, and met Jeanne-Claude in 1958 in Paris and have collaborated since 1961. The artists permanently took up residence in New York in 1964. Jeanne-Claude passed away in 2009.