A Magnetic Disposition: John Dalessandro (ME’67)

John Dalessandro, who graduated from Cooper Union in 1967, would be the first to tell you he does not have a magnetic personality. You might believe him too, because he is quiet, direct and low-key. His specialty is engineering analysis, and he comes across like someone who measures his words before he speaks.

Yet Dalessandro is drawn to magnets. Not just any magnets. Dalessandro has spent much of his adult life analyzing magnets so powerful he has to take special care that their forces do not melt or rip the magnets apart. These are not the type of magnets found in ordinary power generators, electric motors or even advanced medical imaging equipment. Instead, they are the magnets used to squeeze plasma together in fusion reactors, guide the path of fast-moving particles in physics experiments and hurl projectiles fast enough to cover the distance from New York City to Boston in two minutes. 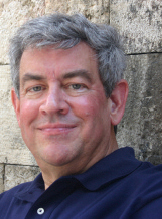 It has not been a dull career for a man who entered Cooper Union thinking that if he couldn’t make it as an engineer, he could always get a job as a skilled tradesman. As a boy growing up in Queens, Dalessandro found he was good at building things. “My father was a fireman, and his schedule allowed him to spend time with me during the day and show me how to use tools to make things,” he recalls. “My older brother built transistor radios. We both built and repaired things. When I realized that’s what engineers do, I decided that’s what I wanted to be.”

Dalessandro did what any technology-obsessed boy growing up in New York would have done. He applied to Brooklyn Technical High School. In addition to studying mechanical engineering, math and machine design, he took many hands-on classes, including machine shop, pattern making and metallurgy. “I ate that stuff up,” he says.

Although he always ranked near the top of his class academically, his most treasured high school achievement was a senior project award for machining and tempering a tool tap to cut screw threads in a hole. Then came Cooper Union. It was very different than it is today. Of the 125 freshmen in his class, only two were women. That was actually more progressive than Brooklyn Tech, which was then an all-boys school. Dalessandro’s Cooper Union had no dormitory and only one computer. It was an IBM 1620 housed in a large air conditioned room and programmed in Fortran by punching holes in thick paper cards. Calculators (and the integrated circuits that made them possible) were still years in the future, so students worked out complex engineering problems using slide rules.


“I guess you could have called me a nerd, though the word didn’t exist then,” Dalessandro muses. “I was just quiet and studious.” But he drew the line at wearing pens in a pocket protector or carrying his slide rule on his belt. “That just wasn’t cool,” he chuckles. 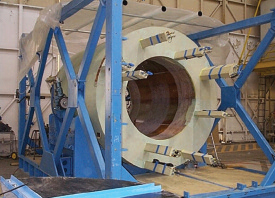 He ended up mastering the classic mechanical engineering curriculum as well as physics. “Working with other bright kids spurred me on,” Dalessandro recalls. Some of the lessons were more about attitude than engineering. “In particular, Cooper Union taught me to be creative and to strive to apply creativity in everything I do,” he says. “Creativity is not something you are born with. It is a state of mind, and an approach to solving all types of problems. It can be taught and developed.

“By my senior year, many of my friends were itching to get out into the real world,” he remembers. “But I was not yet saturated. I was ready to go back on to graduate school to learn more.” Dalessandro chose Cornell University. Aside from an excellent graduate engineering program, it was as different from Cooper Union as possible. Cornell is located in Ithaca, a rural town in upstate New York. It had a traditional campus and dormitories, something Dalessandro had missed while commuting to Cooper Union by subway. Cornell also had women.

Dalessandro met his future wife during the first week of classes. “I took the last cafeteria tray, and a female student asked to share my tray with her roommate—my future wife,” he recalls. “As we like to say, Joyce and I have been sharing ever since.” They have been happily married for more than 38 years, have two married daughters and celebrated the arrival of their first grandchildren—twin girls—this past May.

Although Dalessandro entered Cornell’s Ph.D. program, he left for IBM after earning his M.S. “I thought I would be recognized as a hot-shot mechanical engineer, but I got thrown into the ditches along with the rest of the peons,” he says. After vibration-testing computer memories and keypunch machines, he decided to return to Cornell and finish his Ph.D. so he could work on more interesting projects. At Cornell, Dalessandro began an affair—he fell in love with finite element analysis (FEA). FEA systems are the engineering equivalent of financial spreadsheets on steroids. Instead of doing complex financial computations, FEA systems calculate the interaction of structures and the forces acting on them. FEA is a powerful way to assess the structural integrity of a design, the durability of a part or the performance of a new concept.

Engineers used to do those calculations by hand. Because the process was so slow, they almost always simplified their description of structures and forces. Computer-driven FEA sliced through the numbers. Not only could engineers portray problems more realistically, but they could quickly examine how design and engineering changes altered the results. At Cornell, Dalessandro built his own customized FEA software and used it to determine how to minimize distortions in the large mirror used to image stars aboard what was to become the Hubble Space Telescope. 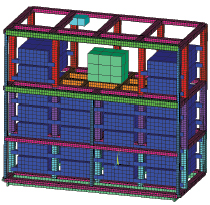 After graduation, Dalessandro tried his hand at writing analysis software in Boston, but soon left for San Diego to join General Atomics’ fusion energy program. “The research sounded really attractive, and at the time many of us saw fusion as the solution to the 1970s oil crisis. We thought we’d have fusion conquered in 20 years time,” he says. The key challenge in fusion is figuring out how to squeeze together plasma so that its hydrogen nuclei will merge to form helium and release energy. Unfortunately, at 100 million degrees, the high-energy subatomic particles want to do nothing more than fly apart. It takes a  donut, more formally known as a tokamak, to keep that from happening. In the center of the donut sits a vacuum vessel with the plasma. The body of the donut consists of D-shaped coils. They generate the magnetic field that helps squeeze the plasma together.

General Atomics’ donut stood 20 feet high. Dalessandro’s job was to make sure the vacuum vessel did not melt or collapse. The problem was not just the high-temperature plasma, but also the tokamak’s magnets. It was his introduction to powerful magnetic fields. Tokamaks presented another challenge as well. Fusion produces high-energy neutrons, which irradiate the reactor and make it brittle. Eventually, it becomes unusable. In 1980, Dalessandro joined INESCO, a company that hoped to solve the problem. Its founder was Robert Bussard, a leader in fusion and a visionary whose description of fusion-based interstellar travel was memorialized as the “Bussard Ramscoop” in Star Trek. The company was funded by Bob Guccione, the publisher of Penthouse Magazine. Bussard’s solution was to design a fusion reactor cheap enough to throw away after it turned radioactive. To do this, Bussard needed more powerful magnets. Superconducting magnets failed when their fields became too strong. That meant water-cooled copper electromagnets. To get his arms around the problem, Dalessandro retooled his Cornell FEA code. It now included the electric currents running through the coils, the heat and magnetic forces they generated, and the stresses created in the coils. “We needed to build cooling channels into the coils to remove heat, but we didn’t want to make them so weak that the magnetic forces would pull them apart,” Dalessandro explains. Despite enormous progress, INESCO’s initial public offering failed. Two days later, the company closed its doors. Dalessandro may have been out of a job, but he left with the first truly sophisticated FEA program designed to analyze high-field toroidal magnetic coils. 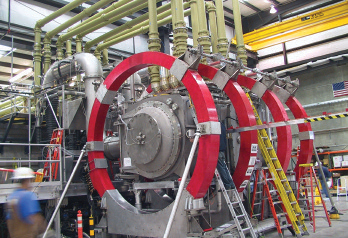 After several years of FEA consulting for fusion projects, Dalessandro joined General Dynamics in the late 1980s to work on superconducting magnets for the proposed Superconducting Super Collider. The Collider was going to be a 64-mile-long, ring-shaped tunnel. Researchers planned to accelerate two counter-rotating beams of subatomic particles at one another and unravel the mystery of matter by looking at what happened when they collided. A vertical magnetic field along the length of the tunnel would deflect those beams just enough to keep them running in a circle. It would take thousands of 60-foot-long superconducting coils to create that field. Researchers at Brookhaven National Laboratory had designed a prototype magnet; Dalessandro’s job was to make the design suitable for mass production. Unfortunately, Congress eventually canceled the Super Collider program. Yet some of Dalessandro’s work at General Dynamics lives on. While there, he worked on the most powerful pulsed superconducting magnet ever built. It became the central solenoid for the ITER program, the international fusion energy reactor now under construction in Europe.

Dalessandro eventually joined Archimedes, a startup that planned to use electric and magnetic fields to separate the most dangerous components from nuclear waste stored at Hanford Site in Washington State. Although the technology proved promising, the government eventually decided to move in a different direction. Dalessandro and many of his colleagues joined General Atomics, which hoped to use their experience with electromagnetics to build a rail gun for the U.S. Navy. A rail gun is a kinetic weapon. Such devices do not carry explosives in their warheads. Instead, projectiles move at such high speeds that their impacts act like sledgehammers. A projectile weighing only a few pounds is enough to reduce a bunker to dust or melt a tank’s armor. By switching to kinetic weapons, the Navy hopes to eliminate carrying ammunition that could explode aboard its ships. Rail guns work by applying a current to two parallel copper rails. When the projectile bridges the gap between the rails, it creates a large magnetic field that propels the projectile from the gun at hypersonic speeds. Rail guns sound high-tech and modern, but that is not how they look when they suck up two million amperes of current to fire a projectile. When they fire, the current arcs, ionizing the air and producing a maelstrom of yellow and red superheated air.

The technical challenge is as tough as any Dalessandro has ever encountered. “It turns the air into plasma, like lightning, except the rail gun’s current is 100 times more powerful than a bolt of lightening,” he explains. “In only a few milliseconds, it produces forces and temperatures that are almost unfathomable. “Forces of such magnitude are not very well understood,” he continues. “The magnetic fields want to rip the rails apart, and they also create enormous thermal stresses. The acceleration—from zero to Mach 7 in milliseconds—produces enormous pressures. No one completely understands what happens at the two ends of the barrel. Many rail guns have blown up during testing.”

It is the type of challenge that has attracted Dalessandro all his life. “We’re looking at materials, shapes, sizes and configurations that have never been explored before in great detail. We are building FEA models that run on supercomputers for weeks to try to make sense of it all,” he says. It may be another fresh challenge, but it is still analysis. Dalessandro’s education at Cooper Union and then Cornell gave him the skills and mindset to work on some of the most challenging engineering projects of his generation. It has left him even more curious and ready for a challenge than when he started.