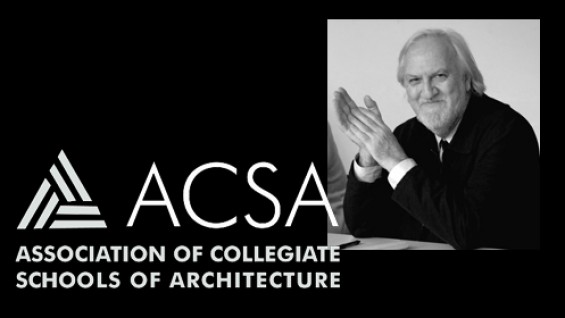 The Association of Collegiate Schools of Architecture (ACSA) has honored Anthony Vidler with a special Centennial Award at their 100th ACSA Annual Meeting in Boston, where Vidler delivered the keynote on March 2. Anthony Vidler is Dean and Professor at the Irwin S. Chanin School of Architecture of The Cooper Union, where he has served since 2001.

The Centennial Award was created by the ACSA Board of Directors in recognition of Dean Vidler’s wide ranging contributions to architectural education. Says Judith Kinnard, FAIA, ACSA president: “Anthony Vidler’s teaching and scholarship have had a major impact on architectural education.  We invited him to receive this special award during our 100th anniversary and give the keynote lecture because of his extraordinary ability to link current issues in architecture and urbanism to a broad historic trajectory.  His work forces us to question our assumptions as we engage contemporary conditions as designers.”

A historian and critic of modern and contemporary architecture, specializing in French architecture from the Enlightenment to the present, Vidler has consistently taught courses in design, history and theory and continues to teach a wide variety of courses at The Cooper Union.

Dean Vidler is the author of seven books, including Scenes of the Street and Other Essays (Monacelli Press, 2011) and Warped Space (MIT Press,2002). His 1990 book Claude-Nicolas Ledoux: Architecture and Social Reform at the End of the Ancien Regime (MIT Press) received the Henry-Russell Hitchcock Award from the Society of Architectural Historians.

As designer and curator Vidler installed the permanent exhibition of the work of Claude-Nicolas Ledoux in the Royal Salt Works of Arc-et-Senans in Franche-Comté, France, and he curated the exhibition “Ledoux et les Lumières” at Arc-et-Senans for the European year of Enlightenment. In 2004 Dean Vidler curated the portion of the exhibition “Out of the Box” dedicated to James Stirling, for the Canadian Center of Architecture, Montreal, and in 2010 installed the exhibition “Notes from the Archive: James Frazer Stirling,” in the Yale Centre for British Art, an exhibition that then travelled to the Tate Britain and the Staatsgalerie, Stuttgart in 2011.

Anthony Vidler has received awards from the Guggenheim Foundation and the National Endowment for the Humanities; he was a Getty Scholar, at the Getty Center for the History of Art and the Humanities in 1992–93 and a Senior Mellon Fellow at the Canadian Centre of Architecture, Montreal, in 2005. He is a Fellow of the American Academy of Arts and Sciences and received the Architecture Award for 2011 from the American Academy of Arts and Letters.