Michael Young, assistant professor at The Irwin S. Chanin School of Architecture, has received a 2019-20 Rome Prize in Architecture. The American Academy in Rome has awarded the coveted prizes annually in a variety of fields since 1896. Congratulations are also in order to David Brooks A’00, who received the prize in Visual Arts, and Marsha Ginsberg A'83, who was awarded the prize in Design. Fittingly the awards ceremony took place in the Great Hall on Tuesday, April 9.

“I was walking from the Foundation Building to get a cup of coffee down Lafayette,” when he got the call from the Academy, Young says.  Perhaps still in shock, the ordinarily erudite Young describes his reaction to the news in just a few words. “Fantastic. Incredible. Huge surprise. It just sort of blew my mind.”

The prize includes the right to wear the the American Academy in Rome baldric, but that is not the only benefit. Its origins lie in a graduating student competition at the École des Beaux-Arts in Paris, the school of fine arts, founded in 1648, for a single scholarship given to the best graduating student to study in Rome for one year.  The prize has been awarded in many fields for over 100 years, but its origins make it especially meaningful for architects The Beaux-Arts architectural pedagogy flourished throughout Europe and with it the notion of awarding a national prize to study in Rome, housed in an exclusive Roman property. The U.S. version of the Rome Prize began in 1896. Awardees are provided studio space as well as room and board for 11 months in the same McKim, Meade & White-designed villa as the first U.S. recipients.

“The Rome Prize is probably the most prestigious academic award to which any architect could possibly gain access,” Nader Tehrani, dean of the school of architecture, says. “Composed of fellows in architecture, painting, literature, music, archaeology, history --among other disciplines, several dozen exemplary minds come together each year to discover how their own work may transform as a result of the inter-disciplinary environment of the academy; immersed in the context of Rome, where several millennia of art and architecture serve as its cultural backdrop.” 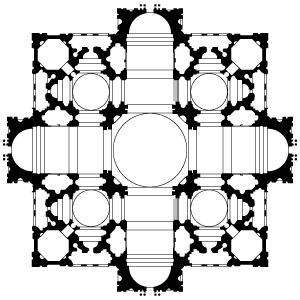 These days the prize has an open application process, whereupon a panel of architects and designers, whose identities remain unknown to the applicants, review the short portfolio, CV, letters of recommendation and particularly the proposal for what the individual will work on during the 11-month residency. Young proposed a project he called “The Labor Within the Image of the Poché.” The term poché refers to areas of an architectural drawing shaded to indicate the space taken up by the walls. “Originating during the Renaissance in Rome, it’s about developing a relationship between mass and space through new drawing techniques. My proposal was to look at that that history in poché, specifically in Rome, and then reinvestigate it through modern techniques like scanning,  photogrammetry and digital technologies. If you can newly investigate, experiment and push it into a different terrain that’s what we do as architects. We don’t build buildings. We make drawings and models and representations.”

Dean Tehrani says of Young: “His interest in the Baroque and its aesthetics makes him a prime candidate for such an opportunity. His exemplary work on representation, on classical problems of geometry and the radical transformation of architectural morphologies puts him amongst histories and traditions that can only but impact his thinking.”

Surprisingly, the recipients of the Rome Prize are not required to deliver anything after their residency, although there is a studio show twice a year during the 11 months’ stay. Participation in this is optional, though. “From my point of view it would be odd and/or disrespectful not to show anything. So I’m going to work. You are free to change what you do. The few people I have spoken with that have been in this lucky situation told me that the project they ended up with was different than what they started with. The academy is totally fine with that. In my mind this will ultimately take the form of a book and some exhibition of drawings.”

“It is a great  value for any school too boast a quality of faculty that merits such an honor,” Tehrani says, “Young will have the time to develop his research in Rome and return to Cooper Union with an expanded vision on how the antiquities may, yet again, come to inspire and gain currency within our pedagogical framework today.”

When he departs for Rome Young will be accompanied by his wife and two children, ages 11 and seven. “We’re excited to go as a family. We see it as: If we don’t do this now we will never do anything like this in our life.”