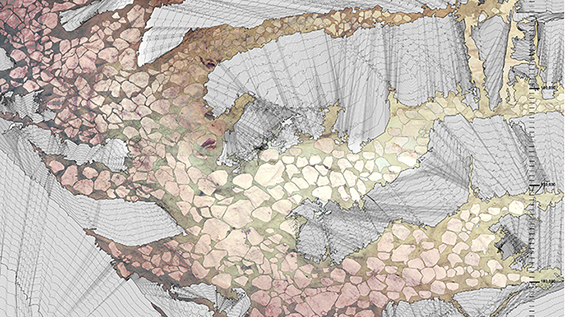 Architecture of Nature/Nature of Architecture
The studio focuses on the earth ecosystems or “nature” as understood in philosophical and scientific discourses. This work is done with a transdiscursive approach that articulates various disciplines in an organic manner as it is born out of the questions posed by this approach. Representation as a tool that has traditionally been used in the sciences is a key element in the explorations developed in the studio.

Historically, there has always been an active interaction between Nature – as a real object and as an object of study – and architecture, but this interaction takes a prominent position at this moment in time. The subject of Nature in its many complex modes of interaction with Architecture – scientific, philosophic, economic, political, ideological – is critically reexamined in this studio, through a process of "reading and rewriting," at various scales ranging from the national to the regional and the local.

The Hidden Structure of Salt Formations, Coastal Gulf of Mexico

This project focuses on the formation of the 15-kilometer high salt structure that lies under the sea floor and in the ground of the Gulf of Mexico, and reveals the complex process that began 250 million years ago. Mostly unnoticeable on the surface, this process manifests itself in the form of Salt Domes around the coastal area of the Gulf. A salient feature in this natural phenomenon is the transformation of the seawater into a solid salt rock formation and, finally, into a highly viscous fluid structure: the Salt Dome.

In its original state the dense sediment above the salt layer increases its size and weight, creating compression on the salt layer, which, as a result, moves upward. Around the shore the salt formations are finger-like, while offshore they become a double layer structure, resulting from the changing density of the sediment.

Heat is an important element in this process. Transmitted from the magma through two aquifers above and below the salt structure, it is in constant interaction with the cold water of the ocean, producing a vertical oscillation that generates landslides that affect the structure.

This project investigates the relationships between various mechanics that influence the formation of a geyser. It should be underlined that this energetic and momentary activity originated from plate tectonics that are both invisible and unrecognizable. The crustal movement resulted in the upheaval of magma chambers while seismic activities caused cracks and faults. The combination of these events over 30,000 years resulted in geysers.

Underground water seeping through cracks and faults is collected in a permeable layer of rock formations that allow the creation of a reservoir. The magma chamber, which is four kilometers below the surface of the Earth, conducts heat through an impermeable layer that lies between the magma and the permeable layer. Because heat produces water expansion, the entrapped underground water turns into steam when it meets the heat, generating the high pressure that produces the geysers. As a result, a slender and lengthy channel, which stretches about two kilometers in length, fills with steam that generates very high pressure. This condition brings about forceful eruptions that manifest themselves at approximately 30-minute intervals.

This project focuses on Mount St. Helens, exploring and revealing through drawings and models the effect of complex physical and chemical interactions involved in the process of subduction, by which water penetrates the rift between colliding tectonic plates, generating a chain reaction that results in volcanic eruptions.

Mount St. Helens, part of the Cascade Volcanic Arc, which stretches from southwestern British Columbia to northern California, presents an ideal opportunity for these explorations as its geological substrata are located at 210,000 feet below sea level. Vast forces resulting from the collision of the Juan de Fuca and the North American tectonic plates cause massive rock formations to crumble and ocean water to penetrate this geological rift. When water reaches a depth that allows the temperature to rise to 1,400 degrees Celcius, a chemical reaction causes the rock to liquefy and vast quantities of magma to form. High-pressure buildup pushes the magma upwards until it reaches the surface of the Earth’s crust, giving birth to the mountainous volcanic landscape of the Arc.