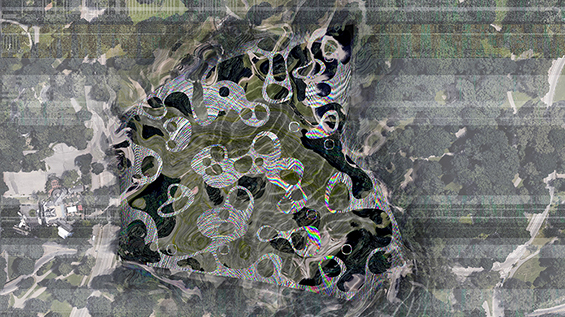 Architecture/Representation/Discourse
Architectural discourse is intimately tied to modes of representation. The arguments that the discipline constructs regarding its aesthetics, concepts, techniques, and ideology are changed when positioned through a plan drawing, an elevational image, a performative model, or a built tectonic reality. As architectural representation shifts in relation to changes in media and mediation, there have been concerns that architecture is in danger of losing its disciplinary expertise. These forays into the digital have been viewed by many as a paradigm shift.

Instead of positioning these transitions as a new paradigm demanding completely "novel" approaches to design, it may be necessary to increase attention to the variable relations between concepts and aesthetics. It is important to point out that the majority of design representation today—two-dimensional or three-dimensional, orthographic or perspective, abstract or photo-real—is initially managed through the data held in a digital model. The differences between mediations are more nuanced than simple changes in tools or techniques. Instead, the key differences are variations in genre, rhetoric, and audience. The crucial questions revolve around how architecture argues its cultural relevance and influence. These are questions of discourse and representation.

Treating different modes of representation as frameworks for creating arguments instead of technical tasks allows each mode to offer alternate relations between concepts and aesthetics. The way that an architect develops and argues a design through the abstraction of plan is different than the way one argues through the visual image of an elevation, and different than the demonstrative value of a model. These three mediations: plan, image, and model were the primary topics during the fall semester. Each mediation was looked at in terms of art, architecture, and philosophical discourse. Issues of abstraction and realism, drawing and image, simulation and construction, share many complex interrelations throughout the history of architecture. Furthermore, the distinctions between them become ambiguous when considered within the post-photographic media arts associated with contemporary digital aesthetics.

The first investigation of the semester looked at architectural plans and the history of discourse developed through them. Key issues for this phase were the relations between composition, abstraction, program, and site. The second experiment was focused on the discourse of the architectural image. The questions of context, background, signification, sensation, and realism were investigated. The third investigation was dedicated to the model as a demonstrative and performative physical object. These models were developed as both digital and physical constructions testing spatial, structural, and material concepts and aesthetics. During the second half of the semester each student worked between these mediums to formulate an argument through an architectural design project.

The Machine in the Garden

Central Park, as a constructed environment in New York City, reflects the complicated urban relationship between nature and machine, and the environment and human behavior. Inside the park, the natural landscape is designed with picturesque techniques that provide an escape from the noisy City. However, the park’s infrastructure—it’s underground pipelines, Wi-Fi hotspots and internet cables—remain invisible to the public. In modern architecture the machine is always hidden inside the wall, remaining a blank, free space outside, but it is the machine that supports and control the space. We are living in a garden of freedom, but one that is constructed and constrained by invisible patterns that we are unable to recognize.

This project proposes a wall surrounding Central Park that blocks all signals to create a quiet zone. Inside the zone there are several devices that poetically intervene with the Park’s infrastructure system, making the invisible perceptible. The park becomes an independent zone, an escape from all infrastructural control in modern city.

Urban infrastructure deprives people of intimate experiences at the scale of their own bodies. This project creates a human-scaled experience with in the massive scale of urban construction.

Under the Brooklyn Bridge in Manhattan, countless temporary supporting columns were introduced to mitigate structural damage. Visitors to the Bridge pass through this forest of columns as they approach the pedestrian walkway, and they inevitably experience both haptic sensations and visual confusion within the interchange—the denser the columns the stronger these sensations. Sometimes visitors even touch the columns, leaving a trace, a manifestation composed of the urban structure.