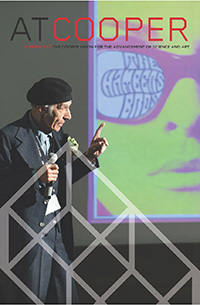 Unsung Experts: Cooper Techs
A rare look at the work of some of Cooper's professional technicians both inside and outside their Cooper studios

Senior Snapshots
Meet some members of the class of 2017 in art, architecture and engineering

Art School Superhero
A talk with Patty Jenkins A'93, director of the blockbuster movie Wonder Woman

From Clay and Cans to Sun-Dappled Pavilion
A team that includes Prof. Powell Draper and Max Dowd AR'16, has won the annual City of Dreams Pavilion Competition

Never Boring
Mary Mann, from the Center for Writing, wants to get you excited about boredom through her new book, Yawn

Paul Tapogna
Designing homes for wildlife at the Bronx Zoo

This Car Is No Lemon
Ten Cooper students won second place for “Lemon Aid,” the shoebox-sized car they designed and built for the 2017 Mid-Atlantic Regional ChemE Car competition

Typographics 2017
The "Festival for People Who Love Type" in pictures

Support Cooper: The Center for Writing