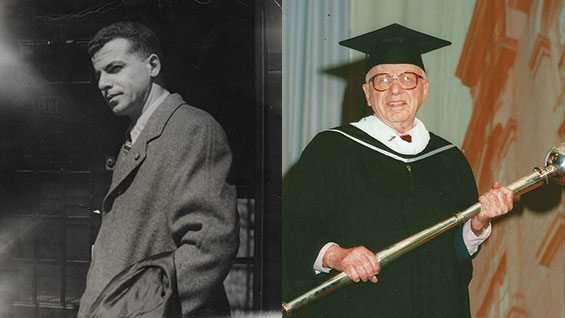 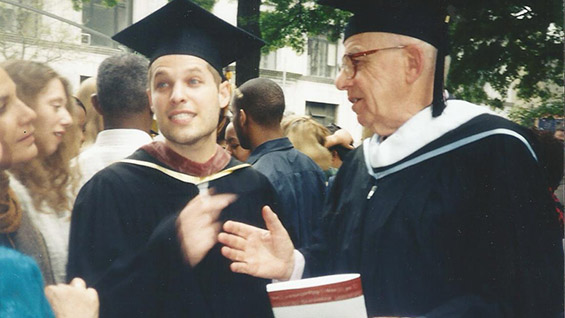 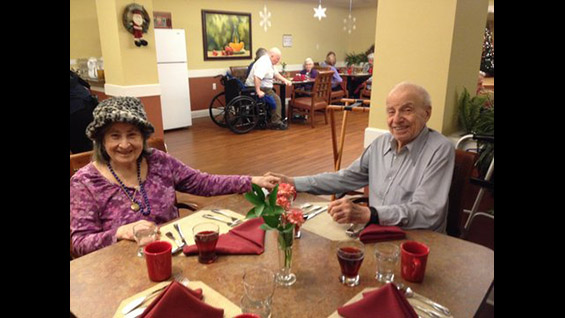 Prof. Leo Kaplan at the age of 26; carrying the Cooper Union mace at the 2003 commencement ceremony

Leo Kaplan, professor emeritus of social and behavioral sciences, passed away on May 23. Professor Kaplan was the school’s provost and vice president from 1973 to 1984. Before starting at The Cooper Union in 1957, he first needed to resign from a job in corporate public relations. His boss told him he could name his own salary if he stayed, but Prof. Kaplan declined, explaining that he was passionate about teaching. The boss responded simply, “Leo, I envy you.”

The story, recently relayed by Prof. Kaplan’s son Harry, could be said to sum up Leo Kaplan’s dedication to The Cooper Union and its students. “He didn’t care about money or status,” Harry said. “He cared about ideas.” A voracious reader, he could hold forth on Spinoza, Russian literature, Freud, the Bible, or Jung with equal ease. “He was really exceptional in the breadth of his knowledge. When we cleaned out my parents’ summer house,” Harry recalled, “there must have been at least 6,500 volumes.” 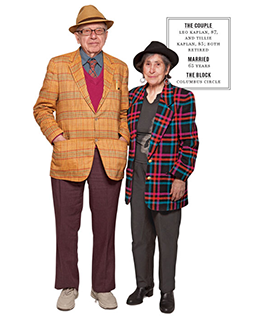 Among his many roles at Cooper, Prof. Kaplan served as Acting Administrator of the Humanities Department in 1971-72, and as Acting Dean of the Liberal Arts and Sciences faculty, as HSS was called, from 1975-76 through 1977-78. A favorite of generations of students, Prof. Kaplan was deeply dedicated to the school and challenged students to push their intellectual boundaries. Anthony Tung, urbanist who was once commissioner of the New York City Landmarks Preservation Commission, said when he was an architecture student, Professor Kaplan met with him weekly to discuss books beyond the curriculum. Years later he acted as a critical reader for Mr. Tung’s book, Preserving the World’s Great Cities: The Destruction and Renewal of the Historic Metropolis (2001), offering suggestions on the chapters related to eastern Europe. “He was one of the most important influences on my intellectual life,” Mr. Tung recalled. (Mr. Tung shared his thoughts about Prof. Kaplan in an essay here.)

Born in the Astoria section of Queens, Leo S. Kaplan was the only child of immigrant parents who spoke to their son in Yiddish and instilled in him a fierce interest in politics. Prof. Kaplan’s father, a native of Vilnius, then Vilna, had been imprisoned in Siberia for anti-czarist activity. When released, he continued his political work, so to avoid further punishment he “ran all the way to New York,” as Harry put it.

After attending Townsend Harris High School, a prestigious public school then located in Manhattan, Prof. Kaplan entered City College but his studies were interrupted when he joined the army in February 1943. Sent to the Pacific Theater, Prof. Kaplan suffered severe injuries at the Battle of Leyte in the Phillippines, after being shot in the knee and back. Tetanus set in as did malaria, and his parents were informed that their son would probably not survive. “It was almost, ‘Goodbye, Charlie,’” as Prof. Kaplan liked to say. But he did recover after spending more than a year in hospitals around the country. When he was finally discharged, he finished his bachelor’s degree and then went on to earn a master’s degree earned at Columbia University. He did his course work for a PhD, but did not complete his proposed dissertation about the Soviet economic system.

He initially taught at Queens College, but was forced out because of communist sympathies, a political position he later regretted. Blacklisted by Senator McCarthy’s HUAC from work in academia, he took a position with Licensed Beverage Industries, a public relations firm for distilled alcohol run by one Tom Donovan, a Goldwater Republican who hired Prof. Kaplan fully aware of the younger man’s political convictions. But he liked Prof. Kaplan’s work so much that even when the FBI called to advise him to fire his young employee, Donovan refused.

But Prof. Kaplan’s desire to return to academia was rekindled when offered the chance to start as an instructor at Cooper. Eventually working his way up to full professor, he taught courses in sociology and psychology. He also served as co-editor on the International Journal of Sociology during the 1970s.

Prof. Kaplan didn’t hesitate to take stands on controversial issues. A group of professors across the country sent a letter to the New York Times dated June 5, 1966 vehemently protesting the Vietnam War and urging the United States government to pull out all troops. Prof. Kaplan, along with 34 other Cooper Union professors, was among the signatories.

Eight years later, when the Cooper Union faculty decided to unionize, Prof. Kaplan spoke out against the move. According to Harry, his father feared that if a union fought for higher salaries those expenses would put the school in financial jeopardy. From Prof. Kaplan’s perspective it was a matter of prioritizing the group over the individual. It was a controversial position, and one that a number of his colleagues found objectionable. Nonetheless, Prof. Anne Griffin, who was active in the CUFCT, found that Prof. Kaplan never slighted or penalized her for their differing position on the union.

Despite his serious dedication to scholarship, he was not averse to more frivolous diversions. If indulging in a second shot of whiskey, he’d tell his son, “Harry, a bird can’t fly on one wing.” A great lover of jazz, he had a large collection of recordings and on occasion would make tapes for colleagues. 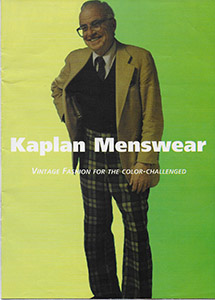 Known for his eccentric dress, Prof. Kaplan’s sartorial decisions raised eyebrows on more than one occasion — according to Professor Griffin, he claimed to have inherited all his clothes from an old friend, though Harry stated he was also a thrift store devotee. During the 1970s, students published a lampoon called The Cooperpolitan. Its back cover showed a parody of an advertisement featuring a photo of Prof. Kaplan sporting plaid pants, a sweater vest, and blazer. The headline read, Kaplan Menswear: VINTAGE FASHION FOR THE COLOR-CHALLENGED.

He met his wife, Tillie, in Boulder when he’d gone there to study with an economist at the University of Colorado. The two celebrated their 70th anniversary in December 2016. They had three children together, Harry, Hannah Filson, and the late Michael Kaplan. In a 2011 issue of New York magazine, the octogenarian couple was featured describing their Christmas gifts for each other, which included a couple of snazzy hats, a pair of high heels, and a stand mixer.

In retirement, he and his wife enjoyed going to the theater and to hear live music, regularly heading to Lincoln Center to see if anyone had tickets to give away. Once inside, they would take unoccupied seats as close to the front as they could find. When their son asked, “But what if the ticket holder shows up?” the pair was unfazed. “So? We’d move.”

Mrs. Kaplan, who survives her husband, was diagnosed with dementia several years ago, requiring the couple to move into an assisted-living facility. Prof. Kaplan had no qualms about the arrangement, said Harry, as long as he could be near his wife.