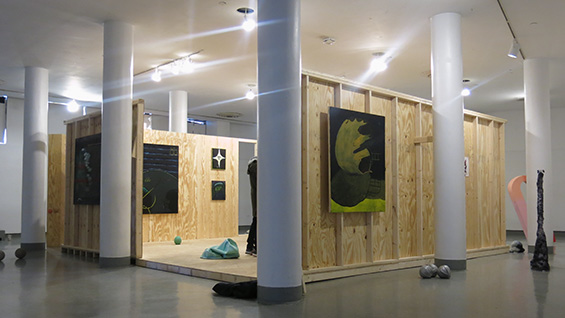 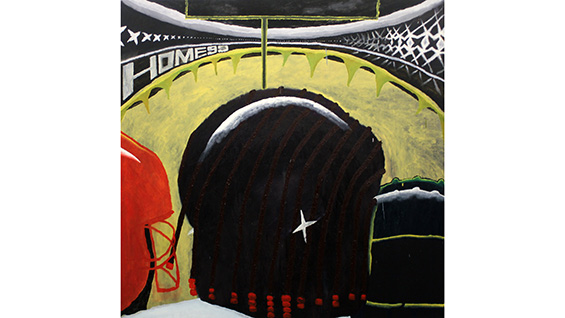 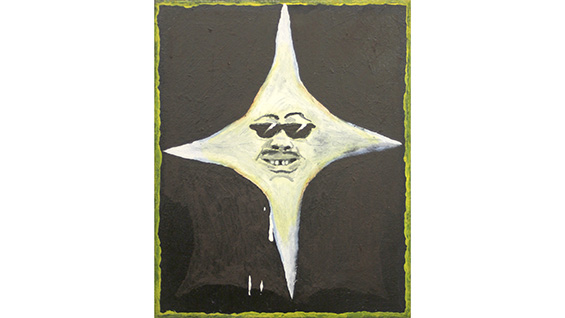 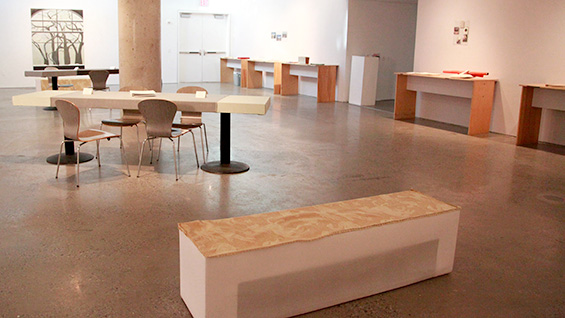 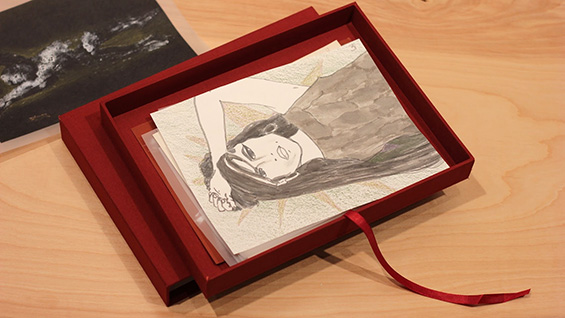 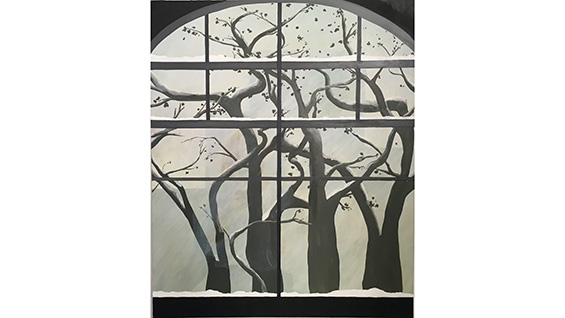 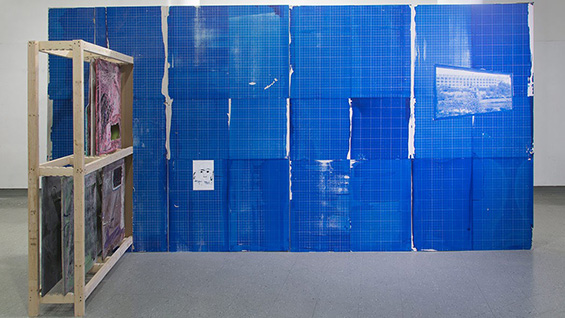 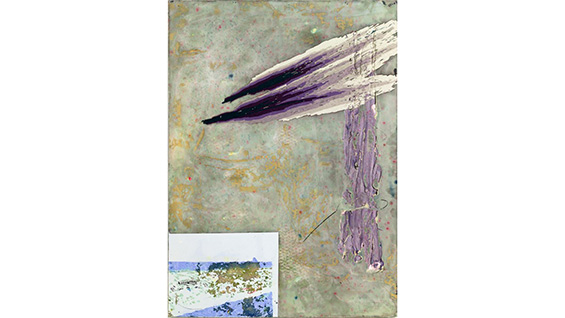 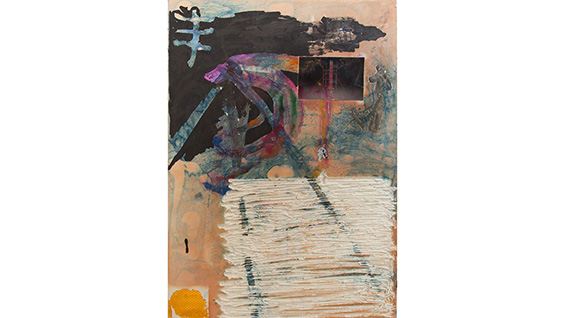 In the final part of our series speaking with members of the graduating class of 2017 [see parts one and two] we turn our attentions to three seniors from the School of Art. Meet Jasper Marsalis, Emma Faith Hill and Pedram Sazesh. 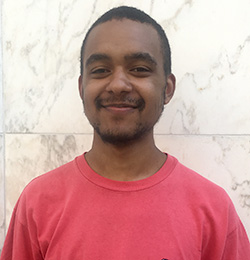 For Jasper Marsalis at least one form of artistic expression seemed completely out of the question. "Are you familiar with jazz baggage?" he asks. "It's like a joke that all the sons of jazz musicians are terrible. I played trumpet for two years and I was terrible." That "baggage" comes from the fact this his father is Wynton Marsalis, the famed trumpeter and composer. (His mother is Victoria Rowell, an actor.) "I wanted to be a car designer. So, I went to a summer camp to learn how to draft. The teacher there told me that, 'You can't draw cars that way. The windows are too small.' I just decided to draw what I wanted to draw. That's how I got into art."

Born in Los Angeles, he moved to New York City in the eighth grade and attended Fiorello H. Laguardia High School of Music & Art and Performing Arts. For college, he thought about applying to various art schools, including The Cooper Union. "I went to all the other portfolio reviews and they all said, 'Hey come. We'll give you money to come here.' I went to the Cooper Union portfolio review and they just handed me my ass. Something about that made me want to try harder and apply more." So, he reformed his portfolio and a second review resulted in a faculty recommendation.

Lately Jasper mostly paints, if a bit reluctantly. He seems like a born contrarian. "I feel like I am a painter in denial just because painting is so stupid. That's part of why I love it. It's such a dumb practice. People who do video or performance, I feel like the medium has more purpose today. Painting is like, what do we do with this thing? That's part of the reason I love it."

For his senior presentation, titled "CLUB," he and his co-presenter and fellow senior Maja Griffin built a mini gallery out of plywood inside the sixth-floor lobby of the Foundation Building. "We made it a point to not hang anything on the actual lobby walls. It was in some ways a rejection of the school." Jasper even finds a way to be contrarian in the context of a school that embraces contrarianism. The focus of his large-scale (about 5 x 5 ft) oil paintings this semester has been … football. "This is a helmet," he says, standing in his studio as he gestures toward a dark canvas with a large, slightly abstracted but readable ovoid shape, including the faceguard and logo. But the works are not without serious considerations of both meaning and form. "I decided that no painting I made could have a flat horizon line. I got really obsessed with the curved look of being inside a stadium so all the paintings have that curved line."

Jasper's feelings about his experience at the School of Art are, perhaps unsurprisingly for him, complex and contradictory. "Without Cooper I would have been a terrible artist. It would have been really bad. Cooper made me question my insecurities. I wouldn't have had the time or space to ask those questions. I feel a debt to it, which is a pretty crazy feeling. But I will not miss it. I've had some of the worst times of my life here. I wouldn't miss living with my parents, either. But I still love them."

After graduating he is unsure what direction he will next take. "I feel like I need to process. But I know I am definitely going to continue working." Oh, and that thing about the jazz baggage? Forget that too. "Now I've been trying to play music again. If I am not in school I am at my house making albums. I have two albums coming out this month. I play the worst instrument of all: the guitar." 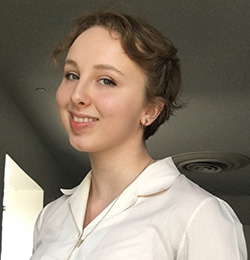 For Emma Faith Hill, art has been an escape and a path forward. Her relationship with art began in earnest when she began attending Interlochen Arts Academy, a boarding high school in Northwestern Michigan, about 250 miles from her home in Port Huron. "I grew up in a party store, which is basically like a bodega in New York, that my mother owned," she says. "It was about 30 minutes outside of Detroit and it was a run-down lost town. You're broke a lot. I loved art as a child but I was not immersed in it. So, my way out of my home situation was a boarding school that focused on the arts. I secretly applied without my parents knowing. Then I got in and everyone pitched in to pay for it. Art programs became my home in a new way."

Emma found out about The Cooper Union School of Art from a friend in high school who applied. "She made it sound like a utopia. The idea that Peter Cooper planned on having, basically, the Bowery Boys come in the southern entrance and leave through the northern exit was this super romantic idea of solving class issues which hit close to home."

Her artistic practice and approach to her experience at The Cooper Union have certainly been catholic. "What I'm making right now is a mix. I write a lot. I've written plays while I've been at Cooper. I wrote a book this year. I kind of have a performance aspect to my practice. It has to do with writing as documentation. I also have a really solid drawing practice. That's the core of my productivity. I've also taken a lot of painting classes. I don't like doing painting that much but I love thinking and writing and talking about painting." In fact, she created a regular art criticism column for The Pioneer and has headed the Poetry Club. Her senior presentation also involved the written word.

Emma collaborated with Mary Wichmann, a sophomore, and Page Page to create a show they entitled "The Glimmering Wing," in 41 Cooper Square Gallery. "It was a reference to a library's wing or fragmented part of a body. We worked from the idea of creating a haptic library, meaning to touch or feel. It was all about physicalizing internal or emotional experiences. There were a bunch of tables with hand-made books laid out. And I also took the John Hejduk-designed benches outside the art office and upholstered them." Yes, she asked permission. A performance space was constructed in the back of the gallery where readings and other activities were held.

You might ask, if writing is part of your artistic practice, how do you get feedback on that from a School of Art? "The Center for Writing has been an amazing resource," Emma says. "The first half of the semester I set up on-going sessions with Avra Spector, an adjunct faculty member, and we worked on my art writing. And then my second semester we did an independent study that focused on experimental fiction." Her work there, and with the Pioneer, has led to a job at Art in America. "Most importantly I want to keep my studio practice," she says. "I am kind of taking the next year to think about whether I want to go to graduate school and if I did, whether it would be for art or writing."

The School of Art's openness to interdisciplinary pursuits have been critical to Emma's growth as an artist, she says. "I've been taking everything: sculpture, drawing, performance, painting, video. And always with serious intent. There is no major other than Art. Which I think is super important now because artists today aren't bound to one medium. They are just makers as a whole. Choosing one medium to master is such an old-school way of making art." 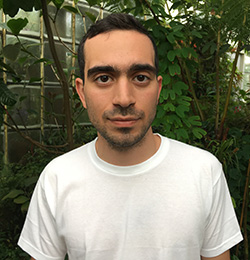 Curiously, Pedram Sazesh also spent his formative years in a shop owned by his parents, and it too played a large role in shaping his future artistic direction. He grew up in Toronto as the son of Iranian immigrants who owned a store that sold Persian rugs and antiques that sparked his imagination as a child. "Early on I knew I wanted to do art," he says. "My parents were very supportive of that interest." Pedram first went to an arts-focused middle school and then attended the Claude Watson Arts Program, part of the Earl Haig Secondary School in Toronto.

Up there in Canada The Cooper Union was not on Pedram's radar until after he accepted a scholarship to attend Nova Scotia College of Art and Design (NSCAD). "After I got accepted but before I went there a good friend's brother at the same school was planning on doing an exchange with Cooper. He told me all about it and I thought, 'Wow, that's where I want to be.' So, I applied as a transfer from NSCAD. I had never been to America before. It was just a shot in the dark." For him, it was a revelation. "I remember right away I really enjoyed such a challenging educational environment."

Pedram's practice is rooted in painting but is informed by a research component. "In Canada, especially at NSCAD, they are really into 1970s-style conceptual art. But at the time I was also interested in painting. When I got to Cooper these seemed like separate things. But here those two things started talking to each other in ways that were really meaningful. It allowed me to be devoted to a studio practice while also being socially minded." That process started, he says, when he received a Benjamin Menschel Fellowship in 2014. The open-ended, research-focused fellowship paid for him and his collaborator, Emmanuela Soria Ruiz to travel to sites around the Straight of Gibraltar to explore how the mythologies around that area informed the current landscape.

His senior presentation, "Negative Horizon," was a culmination of everything he had explored in his time at the school. It was based in research of the island of Kish off the coast of Iran in the Persian Gulf. "This island had an interesting history of urban planning and utopic design," Pedram says. "The Shah decided to hire western architects to build the island into a destination for foreign visitors. When the revolution happened, development had to be put on hold. What was curious for me was how the new state interpreted and added to what the Shah had started. They developed a hotel but that looks like the ruins of Persepolis." He visited the island in the summer of 2015, taking photos and sketching. "Those drawings and images developed into making collaged paintings. The paintings came from borrowing a lot of printmaking processes."

Pedram says his experience as part of the last class of full-scholarship students played a profound role on his art practice and experience at Cooper. "During my first year at Cooper there were a lot protests against charging tuition. Having a free education under Cooper's old mission made me feel that have an obligation to really think critically about what I was doing in the studio and how it was connected to the school and in a larger scope, politically and socially. This way of thinking still exist in my practice as I leave Cooper."

This summer Pedram has been accepted as part of the Skowhegan School of Painting & Sculpture, a nine-week residency program for emerging visual artists, located in Skowhegan, Maine. "After that I plan to have a studio and make work in New York," he says. "Cooper has really shaped my values. Free education sets up a community where everyone is valued equally. Conversation and collaboration have been key to the Cooper experience. My ambition is to apply that ideal to my practice and my life going forward."