This Car Is No Lemon 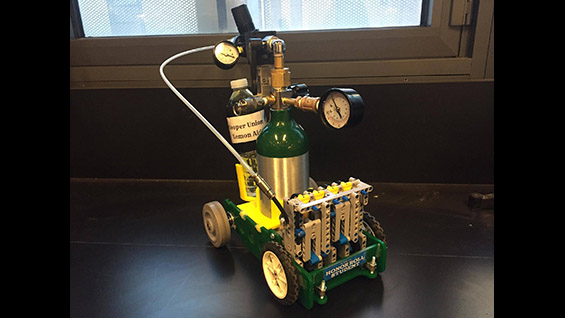 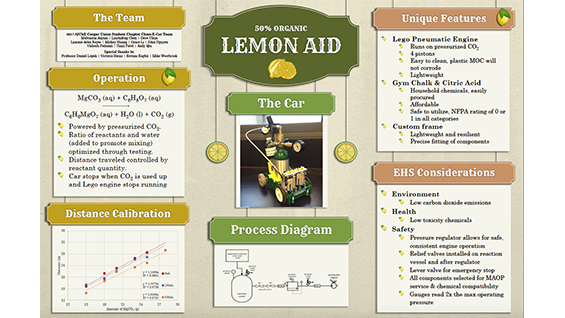 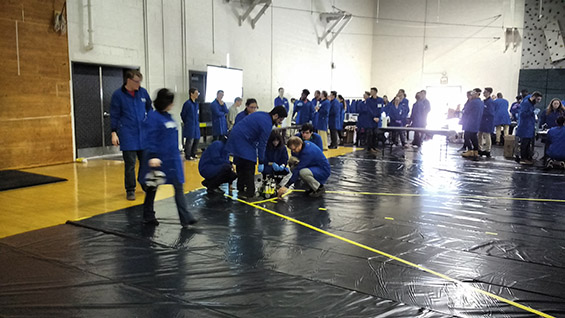 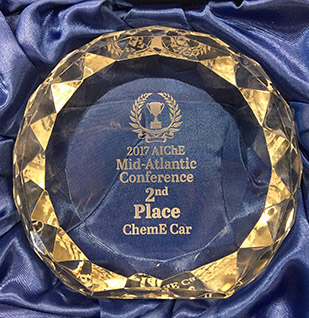 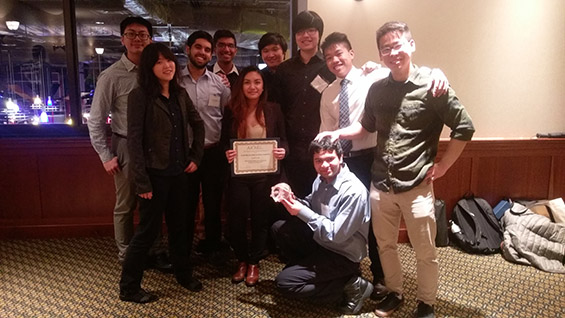 Ten Cooper students—nine chemical engineers and one mechanical—won second place for “Lemon Aid,” the shoebox-sized car they designed and built for the 2017 Mid-Atlantic Regional ChemE Car competition. The annual contest, which this year took place at Rowan University on March 25, requires participants from colleges across the country to build a car that is powered by a chemical reaction. The Cooper team used citric acid, a component of lemon juice, and magnesium carbonate—that is, common gym chalk—to power their car.

Daniel Lepek, associate professor of chemical engineering, who advises the team, noted that the group also took second place for its poster, which explains the science behind their car. Their lemon-fueled vehicle, the poster cheekily noted, is ”50% organic.” It goes on to explain that the chemical reaction depends upon pressurized carbon dioxide—once the CO2 is depleted, the engine stops running. The team modified the car’s 4-piston, lightweight engine made from Legos.

The competition, which is sponsored by the American Institute of Chemical Engineers (AIChE) requires participants to devise a chemical reaction that not only moves a car forward, but also stops after a predetermined distance. While students are given a range of the required final distance—between 15 to 30 meters—specifics are not revealed until the day of the competition. When the distance is revealed, the team must adjust its calculations to ensure that the car would get as close to the specified point as possible.

“Besides traveling a required distance, the car must carry a specified amount of water up to 500 mL, and that amount is also disclosed only at the competition,” said VIsh Padnani, one of the Chem-E Car co-captains. This year, the car needed to travel 26.7 meters and the team’s best run was only .8 meters from the goal line. To qualify for the competition, the team must also prove that their car adheres to extensive safety regulations and guidelines.

Grace Li, team co-captain, said that while this particular team was formed last September, she and Vish have been part of the ChemE Car project for three years. “Although work on the car took place over the course of this academic year, it built off of mistakes, learning and experiences from the past three years. ChemE Car has been a continuous learning and improvement task and has allowed all of us to work on problem solving and design considerations.”

Vish pointed out that approximately 25 teams participated in the regional event, and in October, the Cooper team will be traveling to Minneapolis to compete in the national competition.