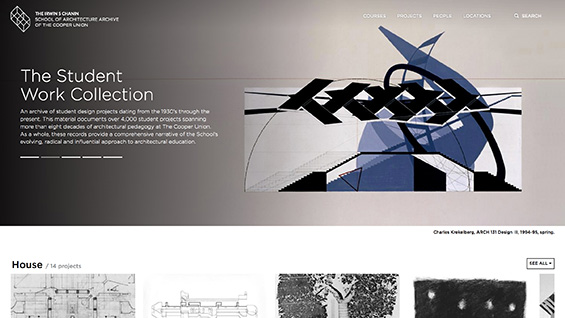 This month The Irwin S. Chanin School of Architecture launches its online Student Work Collection database, which represents over eight decades of The Cooper Union’s experimental, influential approach to architectural education. Available via a free, public website at archswc.cooper.edu, the material provides valuable opportunities for enriching public understanding of American culture, history, and the democratic ideals that shape our built environment. The URL will be released in late November. To celebrate the launch, the school of architecture will present a two-part panel discussion in The Cooper Union’s Great Hall on November 13.

“As we examine Cooper’s legacy, we are reminded of the depth of focus that John Hejduk and a generation of professors put into the project of pedagogy,” says Nader Tehrani, dean of the school. “Some twenty years later, this project has produced exemplary individuals out there in the world—architects, professors, deans, activists—all of whom have carried this legacy forward, giving it new dimensions and interpretations."

The Student Work Collection encompasses analog image, text, and audio records as well as native-digital media that document more than 4,500 projects by over 1,500 students from the 1930s through the present. At launch, the online database includes up to 20,000 of the Collection’s analog records dating from the 1930s–2000. This work, which is the core collection of The Irwin S. Chanin School of Architecture Archive, highlights the singular inclusion of humanities in architectural pedagogy that distinguishes The Cooper Union from other schools of architecture. The Collection includes photos of drawings, small and large-scale models, supplemental sketches, and project descriptions. A selection of this material was previewed in the school’s 2018 exhibition Archive and Artifact: The Virtual and the Physical, which presented 50 years of undergraduate thesis projects by the school’s architecture students. Once complete, the Collection will become one of the first comprehensive, public, digital resources for historical and contemporary architectural pedagogy and student work.

“We are excited to share this rich body of work digitally and are certain it will help provide an integral reference point for any student, educator or researcher of architecture about the radical changes in architectural education and practice of our last century,” says Steven Hillyer AR'90, director of the Architecture Archive. “Now that this body of work in the archive is fully accessible we are looking forward to expanding the Collection’s published material by adding another 30,000 born-digital images, text, and audio-visual records collected after 2000. When the second phase of the database launches in 2022 this living archive of the school’s pedagogy will continue to grow as new student work is documented on an annual basis."

During the two-part launch event, for the first panel a group of current and former faculty—including Diana Agrest, Peter Eisenman, Sue Ferguson Gussow, Michael Sorkin, and Michael Webb—will discuss the school’s pedagogy leading up to 2000, spanning John Hejduk’s teaching and deanship. Distinguished Professor Guido Zuliani will moderate. A second conversation will center on the impact of the School’s pedagogy on the teaching and discipline of Architecture. This will be comprised of former graduates who have become prominent practicioners and educators, including Stan Allen, Peggy Deamer, David Gersten, Laurie Hawkinson, Bradley Horn, Kyna Leski, and Toshiko Mori, and will be moderated by Associate Professor Tamar Zinguer. Following the program, a reception will be held in the Third Floor Lobby.

"Whether we look at the leadership at Princeton, Harvard or RPI, we must reckon with the impact we have had on other cultures many years later. The current generation of faculty and students at The Cooper Union is profoundly aware of this commitment and responsibility, and we continue to explore and experiment without fear of failure—if only to be able to expand the imagination of learning,” Tehrani says.

Generous support for the Student Work Collection Digital Access Project has been provided by the Institute of Museum and Library Services, the Leon Levy Foundation, the Metropolitan New York Library Council, and the National Historical Publications & Records Commission.