At the end of each academic year we introduce a few graduating students from all three schools. In this first of our annual Senior Snapshots series we meet Brandy Vazquez, Juan Carlos Javier and Taesha Aurora, three thesis-year students at The Irwin S. Chanin School of Architecture. Though they completed their final year via an entirely online curriculum, none of them brought it up during our chats. They just focused on the work. Any challenges, however extraordinary, were seemingly beside the point... 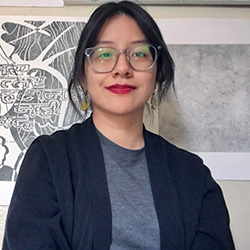 If there is anything like a quintessential Cooper Union student, Brandy Vazquez is it. She is a first-generation native New Yorker, born and raised in Brownsville, Brooklyn, one of the most economically challenged neighborhoods in the borough. During school Brandy continued to live with and support her family. The daughter of Mexican parents, she will be the first to graduate with a college degree. She is the kind of student that has been attending Cooper Union since 1859.

Brandy found her way to Cooper via Brooklyn Tech, where she majored in architecture. During her junior year in high school, she attended the Saturday Program, where local high school students get free art classes. "I greatly admired the thesis architecture students, Jemuel Joseph AR’16, and Samuel Choi AR’16. Their teaching shifted the ways I viewed architecture within the city and nurtured my creative work. Being able to create within the third floor Foundation lobby and tour the studios, gave me a perspective into an architecture student’s life which I decided to pursue."

Her thesis project reflects her background. Titled “Community Builds: Building Public Matters,” she chose to site it at Broadway Junction in Brooklyn, a nexus that connects Brownsville, East New York, Bedford Stuyvesant, Bushwick, and Cypress Hills. As much a work of activism as it is of scholarship, it seeks to empower a local community by balancing its needs with its economic realities.

“It started just being around my neighborhood and me thinking about what can I build here and, if I'm not the one that's building, who is? Who's in control of the environment that's around me? How have they communicated their ideas to the community? Are they being cooperative, trying to collaborate with people? And if not, how can someone else try to do the same thing? Try to build with someone?” Brandy’s answer to that came in the form of a website. “So the idea of the thesis is to connect the community with the resources to build, design and find out about spaces around them. For example, if someone wants to try to figure out what can we do on an unused lot, how do we design it? Who can help? Maybe if you want to build structures, how exactly would you build them? So my website displays information about the neighborhoods, community organizations and about those sites and provides a design template of sorts for you to design on.”

Brandy designed and built the entire site herself, with a focus on usability. “I've been trying to test it out with younger kids and see how they move around different objects” Part of the idea is to provide agency to community members whose working needs prohibit them from otherwise participating in creating local spaces. “I saw a lot of in-person, written interactions between planners and the community. And if you're working, or if you have kids, or anything like that, you can't really participate in those discussions or in those events or meetings. And you can't really design with people. So I thought of a digital solution that could be like an archive where you're actually interacting with things. And you could do it whenever you have time. You don't necessarily need to attend the meeting in person.”

Like many before her, Brandy has been a working Cooper Union student. She taught in the Saturday Program for three years (as did our next two students). Then, between the pandemic causing a major economic slump and having to focus more attention on her thesis, things became increasingly challenging. Brandy credits her education, in part, to weathering the difficulties. “I think the kind of rigor or discipline that it takes to be in architecture school is completely different from other schools. It requires a lot of patience. I am a more patient person. And more curious as well.”

After graduation Brandy hopes to line up a job. “Something that's community centered or civically centered,” she says, unsurprisingly. She realizes this is challenging. But, also not surprising: she’s not going anywhere. “I don't plan on relocating.” 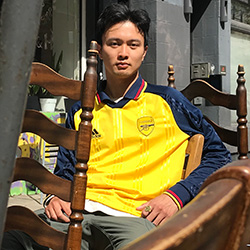 When COVID-19 safety measures forced the school of architecture to close its most crucial space, the giant studio shared by all five classes, Juan Carlos Javier and some of his other classmates decided to recreate it at scale. Not a model. An actual studio. They rented an apartment in Bushwick, Brooklyn, put their desks together in one of the rooms, and built a maker space in the backyard. “I wanted to in some way mimic the studio life that is so important to the school of architecture,” Juan told us.

Born in the Philippines, Juan arrived in Northern California and attended high school outside of Sacramento. He did not then go to The Cooper Union. He had never heard of it, nor did he have any particular interest in art or design. “I ended up moving to LA after high school to sort of figure things out for myself. I worked some jobs and took a few community college courses. One happened to be an architecture course and I really fell in love with how the professor taught it. The professor egged me on and encouraged me to look into the The Cooper Union. So I decided to apply.”

Juan continues that passion for pedagogy. Like Brandy, he started teaching in the Saturday Program beginning in his third year. “How I view the practice and discipline of architecture has changed. The opinions of my peers have opened up a multitude of things that I would like to --not exactly change in architecture -- but let's say critique it. Cooper has allowed me to better figure out the things that I want to participate in as a designer, and the things I want to push further in terms of the changes I'd like to see.”

Juan’s thesis, “If Care, a Standard,” exemplifies that interest in critique. “It’s about happenstance occurrences, or ‘mundane’ indexes of random people’s informal construction of spaces. The curbside gardens you encounter walking on the street, for example, or the informal seating arrangements one finds on the sidewalk or at the corner. Anonymous artisans that proliferate in cities.” What would it mean to apply the standards of architectural critique and examination to such locations? The idea began while working on a project back in the Philippines as part of the Menschel Fellowships. There he began focusing more intently on the roadside stalls rather than the more famous architectural works.

The thesis takes the form of drawings and photos. “We learn all these standards and conventions about drawing and notation. So, I wanted to try and apply those standards of drawing to something so inconsequential or arbitrary as a wooden stool on the street. I think we're fairly comfortable with looking at something formally, but I'm trying to draw a place through a close observation of, or with a close narration of the minutia. I want to view these everyday occurrences as a way to read our place in the city.”

After graduation he hopes to take “a solid break.” But he won’t be loafing around. This past year he has been active with Serving the People, a digital art exhibition space founded by Lucien Smith A’11. There he will be participating in an online exhibition, “What Will You Tell Next Year,” initiated by Alisa Petrasova A’21, and built around the theme of climate change. He’s also working with Brandy Vazquez to start up “Open Study,” modeled on the Saturday Program, that offers a free arts and design mentorship. “Developing my own work from academia and kind of using it within my own personal practice in the arts, design, and education is also something I'm doing. I'm taking a step back during this summer to look at the work I've produced these past five years and make work for myself and hopefully share in the future.” 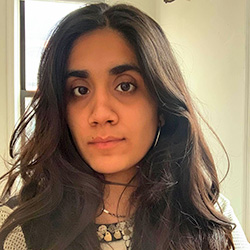 Taesha Aurora, who grew up visiting her father’s architecture firm in Gurgaon, outside of New Delhi, India, says she was “never terribly interested in becoming an 'Architect,' with a capital A.” But the notion of an architectural education intrigued her. This interest in the process of how we learn, explicitly and implicitly, has become a theme that runs from Taesha’s high school experience all the way through her fifth-year thesis project.

Taesha attended a newly-established alternative primary school in India from the second to 12th grade, where she was part of the second graduating class, made up of 14 students. The evolving circumstances of her early schooling led her to become part of the student government. During her junior year she became, “obsessed,” she says, with The Cooper Union’s student protests, including the 2013 occupation of the president’s office, over the introduction of tuition. “Where I come from, education has historically been much cheaper than in the US where it's seen as a business model. But this sort of idea of education as a business model is now coming to places like India and it's scary to see. So, looking at Cooper, which has been such an anomaly in this landscape, has always been interesting to me to see how the relationship of a student and an institution is different when it isn't about treating students as cash cows.”

That interest turned to action when Taesha ran and got elected as a student trustee at Cooper Union in 2017. Normally serving for two years, she continued for an additional eight months because of the COVID-19 outbreak. “I was on the Free Education Committee and the Academic Committee, but I also got to sit in on the Finance Committee. And those are worlds that I've just never inhabited. Understanding numbers and budgets and things of that sort is a valuable skill for an artist or an architect to understand, because it's just something that we don't usually have in our education. Then, suddenly, I got to see eight months of an institution bootstrapping: fundraising derailed and figuring out how a school is about serving its students, its staff and faculty under those circumstances. Yeah it was just crazy.”

It may come as no surprise, then, that the subject of her thesis, “all my lies are always wishes,” follows a familiar theme. “It’s about the intersections of policy, media, and desire,” Taesha says. “Where I'm from in Delhi, every new development is like this glass building, which is ridiculous for that kind of climate. For me, it's a question of the desire for something like that because we've been told for so long that concrete and glass and steel is ‘modern’ and it's ‘developed.’ It’s really hard to think of other materials as desirable.” To explore this, Taesha has been filming around New York City and either projecting images of sustainable structures against the background, or superimposing the images using a greenscreen effect. These sequences are then integrated into a website with other images and text. “It is essentially a thesis about cities and the way we look at them.”

After graduating Taesha has a year left on her international student visa, though she is unsure what she will be doing. She expects to move back to India afterwards and eventually go to graduate school. “I have most definitely changed since I arrived at Cooper. I've become more cynical, but also so much more interested in how institutions work and function. When I leave Cooper,” she pauses, “I’m … I'm going to have, like, withdrawal.”