Please join The Irwin S. Chanin School of Architecture of The Cooper Union for a walking tour of works by Sardinian-born artist and sculptor, Costantino Nivola, on Saturday, October 26th at 10am. The tour will begin at Louis Brandeis High School, located at 145 West 84th Street in Manhattan. This event is being held in conjunction with the upcoming exhibition of Nivola works set to open at The Cooper Union in January 2020.

Costantino Nivola was a unique figure who bridged art and architecture by creating site-specific artwork for buildings, most of them publicly accessible and many in collaboration with prominent architects. He occupies a largely unexamined but important place in the post-war modern movement, and his artwork communicates to a broad audience using a symbolic language he created with materials and methods often shared by the buildings he embellished.

For his pieces that adorned architecture, Nivola worked mostly in concrete and explored a wide range of techniques including cast and sculpted concrete, frescoes, bas-reliefs and scrafitto. He placed free-standing sculptures in and around buildings, affixed cast panels to facades and inscribed wet concrete with designs on-site.

New York City is home to the largest gathering of Nivola’s public artworks – 21 pieces across all five boroughs, at least 17 of which still exist. The tour will include visits to six sites in Manhattan and Brooklyn. 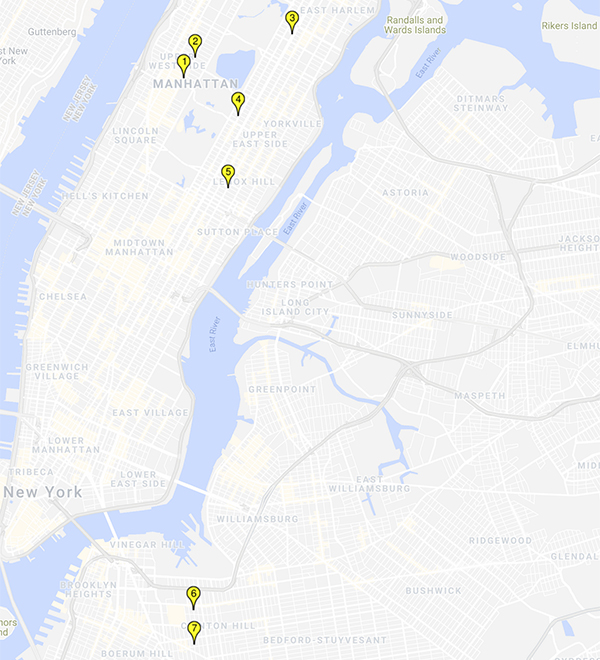 Please note: we will be traveling by bus between some Manhattan locations, and via subway between Manhattan and Brooklyn.

The tour will be led by exhibition co-curator Roger Broome, a licensed, LEED-accredited architect. He practices in the greater New York City area, holds a Bachelor of Architecture from The Cooper Union (1990) and has been working in the field for over 30 years. He has worked in a broad variety of specialties such as exterior renovation, acoustical, exhibition and retail design.

Carl Stein is a Principal of Elemental Architecture, the successor firm to The Stein Partnership. Carl first met Costantino Nivola as a child in 1951 when his father, the architect Richard Stein, was working on several projects with Nivola. After working for Marcel Breuer and Associates, Carl joined his father’s firm, leading to the formation of The Stein Partnership in 1977. Throughout the Partnership’s early years, Nivola was omnipresent, heavily involved with a number of playground and school projects as well as a memorial to Antonio Gramsci. During this period, he was also an important mentor. In 1982, Carl received the commission for the Combined Police and Fire Facility on East 67th Street. The project included a significant budget for art and he arranged for Nivola to be the artist. Sadly, this turned out to be Nivola’s last public commission in North America. The final assembly and installation were completed after his death.

Stein studied architecture at The Cooper Union and at Harvard University’s Graduate School of Design after completing undergraduate studies in physics at Middlebury College. He currently sits on the Board of Directors of the Fondazione Nivola in Orani, Sardegna.

Katie Merz' work ranges from delicate drawings to abstract paintings and sculpture, and is influenced by Brooklyn, cartoons, architecture, silence and the kinetic structure of things. Media has influenced the constantly changing surfaces that she works on. Synthetic, clear, moving and simple. No hierarchies are implied. Lines and respect for their changing integrity are what her practice is. Her signature style, densely-packed glyph patterns, creates complex, non-linear narratives depicting everything from her favorite poems to conversations she had with the people passing by. Merz earned her BFA from The Cooper Union. She has exhibited nationally, including at the Brooklyn Museum. She is a recipient of the Pollock-Krasner award, the Oberman Center Collaborative grant, and has been a fellow at both the Chinati Foundation and the MacDowell Colony. She is currently a Drawing Professor at the Cooper Union’s School of Art.

This event is being organized in association with Archtober, Architecture and Design Month New York City, October 2019.

Nivola in New York  I  Figure in Field will be on display in Cooper Union’s Arthur A. Houghton Jr. Gallery from January 23 – March 15, 2019. In parallel with the exhibition, The Cooper Union will organize onsite events, including a public panel discussion and gallery tours. This project has received generous support from the New York State Council on the Arts.

ABOUT ARCHTOBER
Archtober (ärk’tōbər) is New York City’s Architecture and Design Month, an annual, month-long festival of architecture activities, programs, and exhibitions taking place during the month of October. Archtober presents special tours, lectures, films and exhibitions that focus on the importance of architecture and design in everyday life. The festival’s many participating organizations aim to raise awareness of the important role of design in our city and to build a lasting civic and international recognition of the richness of New York’s built environment.