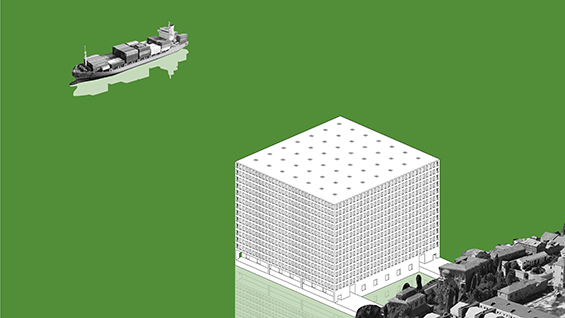 In conjunction with the exhibition Misunderstandings, currently on view in the Third Floor Hallway Gallery from January 24 – February 15, 2018, Pablo Castro and Jennifer Lee of Obra Architects will lecture on the publication they produced for the exhibition, under the prompt of Surprise/Limit and using images of Guy Rottier’s Maison Vivante as a point of inspiration.

About Obra Architects:
Obra Architects was founded by Pablo Castro and Jennifer Lee in the year 2000, and is based in New York, Beijing and Seoul.  Obra’s efforts span the realms of architecture on all scales, from international masterplanning, multifamily residential and institutional work to the scale of interiors, furniture, and public art.

Obra has produced a body of award-winning projects recognized by six American Institute of Architects Design Awards and two Chicago Athenaeum American Architecture Awards, among others. The work of Obra has been exhibited widely, and has been featured at the Museum of Modern Art, PS1 Contemporary Art Center, Solomon R. Guggenheim Museum, Deutsches Architekturmuseum, and Rhode Island School of Design, and most recently at Architektur Galerie Berlin. Obra is the 2006 Winner of the PS1 MoMA Young Architects Program, 2005 Architectural League Emerging Voices, and has been commissioned for installations at the National Art Museum of China 2009, the 2011-2012 Shenzhen Hong Kong Bi-City Biennale, the 2014 & 2016 Venice Architecture Biennale, and most recently at the Frac Centre’s inaugural Biennale d’architecture d’Orléans. Obra has received the 2014 Kim Swoo Geun Preview Prize, was appointed as a Seoul City Public Architect (2015) and designed the Cities Exhibition for the first Seoul Biennale for Architecture and Urbanism (2017). The firm is a NYC Department of Design and Construction Design Excellence contract holder to design the City’s new public buildings and capital construction projects. Their second monograph entitled Obra Architects Logic: Selected Projects, 2003 - 2016 has just been released by Arkitektur B, Copenhagen.

Current work includes a private residence in Chevy Chase, a multi-unit housing project in New Jersey, a residential building in Argentina, and the Korean Cultural Center in DC. Recently completed work includes a kindergarten for 550 schoolchildren on the outskirts in Beijng, a private residence in Argentina, a 660-hectare masterplan development with artpark in Gyeonggi-do outside of Seoul, Korea and a private eco-residence built in Costa Rica.

Pablo Castro graduated from the Universidad Nacional de San Juan in Argentina and holds a masters degree from Columbia University. He is a 2006 NYFA Fellow and a 2003 SAH de Montëquin Senior Fellow and a 2012 Rome Prize Fellow of the American Academy of Rome. He participated in MoMA’s 2007 Conversations with Contemporary Artists and has taught at Rhode Island School of Design, Parsons, Pratt, and Cranbrook. He has lectured across the globe, at Korea National University of Arts, Seoul National, Central Academy of Fine Arts (China), Tsinghua, UC Berkeley, Universidad Nacional de Chile, Instituto di Tella, Universidad Diego Portales, RISD, Columbia University, Cranbrook, and ETSAM, Madrid. He is a licensed architect in NY, CT, and Argentina.

Jennifer Lee has been collaborating with Pablo Castro since 1997. With the inception of their design studio Obra Architects in 2000, she has co-directed over 160 award-winning works ranging from conceptual projects and masterplans to built construction. She is a graduate of Harvard College cum laude and the Cooper Union for the Advancement of Science and Art. She is the 2007 Cooper Union Urban Visionary Emerging Talent, 2006 NYFA Fellow, a 2003 SAH de Montëquin Senior Fellow, and has taught at Pratt Institute Graduate Architecture, Cranbrook Art Academy, and the Irwin S. Chanin Architecture School at Cooper Union, and most recently at Korea National University of Arts. She is a LEED AP licensed in NY, NJ, and DC.

This event is open to Current Cooper Union students, faculty and staff.