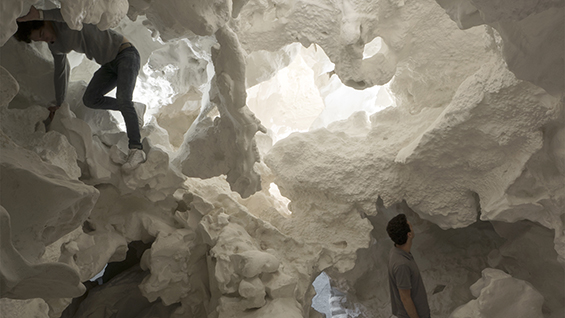 Often, architectural space is defined by requirements which are totally arbitrary and alien to the discipline of architecture itself. This lecture will focus on architecture and its medium, the three-dimensional space, not in a closed, clearly defined way, but instead in an experimental way that opens up various approaches for defining and thinking about space. Working titles such as atomized space, incidental space, ornamental space, and fluid space, among others, are used to describe architecture in the most distant and abstract way: only with words, deliberately without any images or references, and purely by the effort of thinking to trigger projects - working on the essence of architectural space itself.

Christian Kerez was born in 1962 in Maracaibo, Venezuela and obtained his degree in architecture at the Swiss Federal Institute of Technology in Zurich. After extensive published work in the field of architectural photography, he opened his own architectural office in Zurich, Switzerland, in 1993. He has been appointed as a visiting professor in design and architecture at the Swiss Federal Institute of Technology Zurich since 2001, as Assistant Professor since 2003 and as a full professor for design and architecture since 2009. In 2012-13 he led the Kenzo Tange Chair at Harvard University, Cambridge. He participated in the Swiss Pavilion at the Venice Biennale 2016 with the project "Incidental Space."

This lecture is free and open to the public.  General public should reserve a space here. Please note first come, first seated; an RSVP does not guarantee admission. All registered seats are released 10 to 15 minutes before start time, so we recommend that you arrive early.

This lecture is sponsored by The Ornamental Metal Institute of New York with support from The Irwin S. Chanin School of Architecture of The Cooper Union.