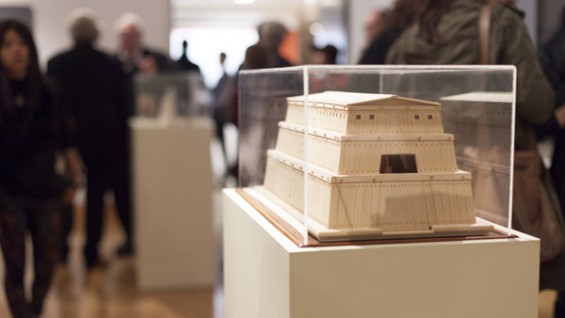 Massimo Scolari, international architect, designer, painter and subject of a 45-year retrospective at Cooper Union, sat down to chat about his show and, as a former faculty member, his return to the school.  “I taught here in 1977 and 78,” he said. “I didn’t want to exaggerate my presence so I waited 35 years to return” he said, laughing. 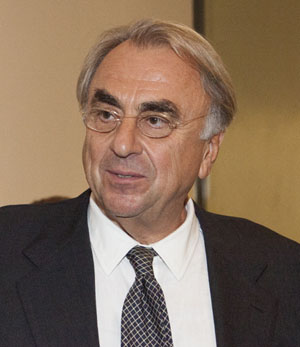 Massimo Scolari: The Representation of Architecture, 1967-2012 opened to the public on October 2 in the Arthur A. Houghton Jr. Gallery in the Foundation Building.  Both designed and curated by the artist himself, Scolari calls it “the biggest show I have ever done.”  Born in Novi Ligure, Italy in 1943 Scolari studied architecture at Milan Polytechnic and now lives in Venice.  Spectacled, with his hair swept back and dressed in a dark suit, Scolari was in good spirits prior to the opening reception.

Reflecting the eclectic nature of the artist, the show contains a wide range of material including student architectural drafts, watercolors, set design sketches, architectural models and images from his monumental sculptural works that have appeared in numerous art  and architecture festivals around the world.  The show’s largest work can even be viewed from the street. The Glider, a 22-foot-wide sculpture in the form of a pair of wings graces the third floor balcony of the building.  (See how it got there in this online photo essay.)

Presented by the Irwin S. Chanin School of Architecture, the show defies conventional notions of an architect’s retrospective.  In fact Scolari’s main focus has long been deeply saturated watercolors of architectural forms and even landscapes of imagined places.  Planets, people and fantastical animals occasionally appear.  “The work has a relationship with science fiction,” Scolari said.  “The landscapes that I paint are somewhere but you don’t know where.”

Asked how he approached the show Scolari said, “I chose the most representative works, like it was an anthology.  It is a broad retrospective containing the majority of my main work.  I organized, in a chronological way, an exhibition which practically summarized my entire career from the 1960s until now.”

Rather than the usual installation of hanging work, the space of the gallery has been divided by dark grey panels that don’t quite reach the ceiling, into which the pieces have been set behind glass.  Along the outer walls Scolari has installed work inside elegant, matching grey vitrines.  The works seem to float inside against a charcoal background that, in contrast, enhances the already richly-colored images.  “Usually I make small watercolors,” Scolari said.  “Since they are very small I chose to frame them in an intimate way.  When you hang these little works separately they get completely dispersed.”

Many of the works evoke narratives, like the one titled Lost Robots from 2011, where three boxy, vaguely humanoid machines huddle together in a field of tall, bluish-grey grass under a bleak sky.  “Robots are one of the more recent interests I have,” Scolari said.  “When I was younger I remember reading about them in Isaac Asimov’s works and at the time it was impossible to imagine. Now they are here. Today they are even making war, like the drones,” he said, moving his hand through the air like a plane.

Wings form a major motif in Scolari’s work, appearing repeatedly throughout the show.  “I was always interested in wings, aviation and flying,” Scolari said.  “The wings I have been drawing resemble the B-2,” Scolari said, referring to the U.S. Air Force’s “Stealth” bomber plane, “but my wings were drawn ten years before!” Scolari seemed caught by a notion and continued, unprompted, “Somebody once asked me about the resemblance. ‘Did you know something before?’  No. Never.  I think Art imagines first something that can happen afterwards.  It has a way of previewing reality.  Because what is going to happen is already a reality, but most people don’t see it.”

Massimo Scolari: The Representation of Architecture, 1967-2012, is open to the public 12 to 7 every Tuesday through Saturday until November 21st.