End of the Year Letter from the Dean 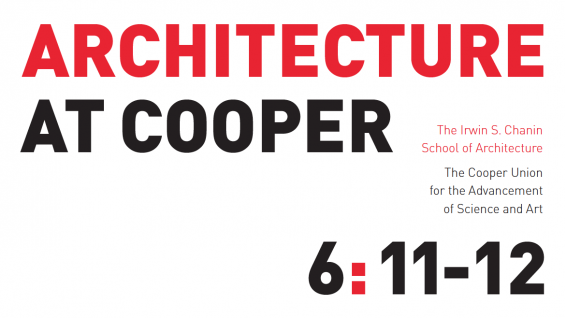 If there was one constant during this turbulent year of debate over The Cooper Union’s financial crisis, it was the dedication and resolve of the students in The Irwin S. Chanin School of Architecture to the task of developing their projects at the highest level. In the words of one, that stand for all, “We have to demonstrate by the quality of our work that the school is worthy of rescue.”

This year’s exhibition, while responding to the general call for frugality, provides an opportunity to assess the varied and imaginative ways that students answer the call for an architecture that at once continues the fundamental traditions of drawing and design that have always marked out the school for distinction while seeking to confront the rapidly changing conditions of theory and practice.

For, beyond any immediate economic exigency, architects are faced with the need to re-think their strategies in the light of the urgent questions raised by increasing scarcities—of shelter, food, water and energy. Many of these issues have to be seen in a holistic and global frame of reference and, of course, not all of them can to be solved by architecture. But architecture, envisaged at its most expanded scale, as well at its most intimate, can and should take these problems into account, and define precisely where it might intervene in order to ameliorate or moderate, and certainly not exacerbate them. It has often been said that the global and the local are fundamentally interrelated. Indeed a global frame of reference demands a specifically local response; the universalizing tendencies of the past, inherited from the Enlightenment, do not always work effectively in a local context; so the global frame implies a new look at the local frame, and all the scales and operative frames in between.

Beginning with the First Year and through each studio and course to the Graduate studios, and with the programs of The Cooper Union Institute for Sustainable Design, students are investigating these issues at all scales, using their skills and knowledge to recognize the fragile contract between human settlement and the environment, urbanization and suburbanization seen in the light of what John McHale, researching the “future of the future” in the late 1960s, termed “the ecological context.”

The First Year studios, while introducing new students of architecture to the formal, arterial, and programmatic principles of architectonics, operate as research laboratories in form and space, with students working in groups investigating the parameters of visual perception, light, orientation, inhabitation and structure, The Second Year explored the ramifications of advanced topological design in a creative three-dimensional extrusion of the classic Cooper Union “Nine-Square-Grid” problem, and went on to study the complex implications of entry: their “doors” revealed all the exciting (and problematic) possibilities of the interstitial space of passage through a wall—the first step into inside space from outside. The Third Year Comprehensive studio immersed itself in the analysis of the inter-relations among the myriad components of architecture, from regulations, to program, structure, building and environmental technologies, ending the year with proposals for an elementary charter school in Harlem. This proved an exciting program that engaged the students in a creative field of social, educational, and spatial relations. Fourth Year began with a large-scale study of the suburban environment, bringing together the insights of landscape architecture, urban renewal, and ecological analysis in order to propose varied responses to the continuing, and escalating, problems of suburbia. The year continued with the examination of civic space within the urban fabric in relation to the idea of the “Templum” in the contemporary city. The Fifth Year Thesis is a full year research and design studio that allows each student to indentify a problem field—local or global— considered especially susceptible to architectural intervention at different scales. Studies ranged from the challenge of declining agricultural production and aquifer exhaustion in the Mid-West to the construction of “memory theaters” in the context of Australia’s checkered history with its indigenous populations, the potential of landscape ideas to transform urban re-formulation, the research into new materials and spatial techniques for going beyond orthodox geometrical design, the crisis of the growing “informal” cities of the favelas, to finding ways through drawing in which philosophical thought might be explored in its three-dimensional implications. The Graduate studio looked at the structure and form of urban regions in order to draw out their environmental and programmatic potentials, followed by a study of large scale landscapes and their possibilities considered as architectures of nature. The Graduate students will complete their program following the development of their individual theses projects this summer.

This diversity of new questions, as exhibited in this year’s show, is guided by a powerful philosophy forged over the more than forty-five years of educational practice at Cooper and sustained by the continuing reverberations of Peter Cooper’s hundred-and-fifty-year mission. The education of an architect may have developed and been transformed over time, even as the mission of The Cooper Union has responded to fundamental shifts in the composition of society and its political forms, but historically, two themes stand out as constant reminders that architecture is at root a humanistic art, dedicated to the spatial health of a citizenry. The first might be subsumed under the rubric of drawing, an art and technique that enters into every discussion at Cooper. Drawing is at once a motion of the hand and a response to the eye, and an exploration of thought as it gains the three and four dimensions of space and time. It is also a direct mark of the role of the hands in touching and making, and whether the mark is literally drawn by hand or virtually imaging a gesture, the relation between hand and mind is that which binds design to the construction of space. As the great art historian, Henri Focillon concluded his seminal essay “In Praise of the Hand:”

“The mind rules over the hand; hand rules over mind. The hand wrenches the sense of touch away from its merely receptive passivity and organizes it for experiment and action. It teaches man to conquer space, weight, density and quantity. Because it fashions a new world, it leaves its imprint everywhere upon it. Trainer of man, the hand multiplies him in space and time.”

It was no accident that, receiving this essay from Focillon in 1943, Le Corbusier was inspired to design the Open Hand for Chandigarh. It is also the sentiment that has guided and enabled the practice of an especially unique architectural education at Cooper.

The second theme would be that given by Peter Cooper, his demand that the central purpose of the Union would be to create the conditions for the education and uplift of a citizenry, free to think and create, debate and disagree, in the context of an always-evolving democracy. The role of architecture in this debate has taken many forms over the last half-century, but the dynamic interaction of inventing and making, conceiving and constructing, remains its task and its challenge in a world increasingly divided, in economic wealth, resources, and ideologies.