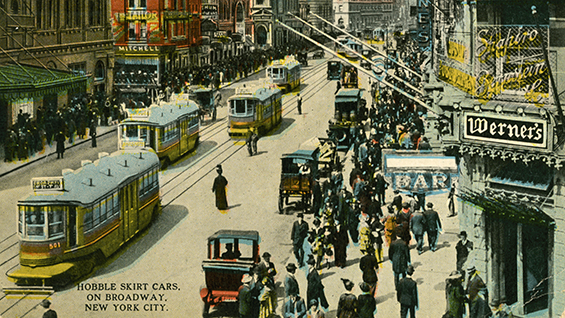 Most of the postcards document New York City’s built environment and infrastructure, including many no-longer-extant buildings, interiors, businesses, and public spaces. They record a city in constant flux, capturing several decades of urban development across all five boroughs, from the city’s piers, airports, subways, and armories to its public parks, aquariums, monuments, and libraries. These postcards also attest to the diverse commercial and public interests that shaped both the subjects they depict and their own role as mass communication media. In addition to recording the city’s evolving physical form, the postcards are commercial artifacts marking the rise of consumer culture, the growth of middle-class tourism, and the development of publishing technologies that fostered their widespread distribution and explosion in popularity during the first decades of the 20th century.

Views Along Broadway
"The best way of finding out the inside of an orange is by cutting it through the middle, and if, in a sort of geographical vivisection, a scalpel should be drawn down the middle of New York, it would fall into the channel formed by Broadway." (1)
– William Henry Rideing, Harper’s New Monthly Magazine, December 1877

Fran Leadon, in his recently published history of Broadway, notes that Broadway is almost always experienced in fragments, but traversing its 16-mile length across the city—from Bowling Green at the base of Manhattan to Van Cortland Park in the Bronx—reveals it to be “the one thread that keeps the city stitched together in time and space.” (2) This is evident in the Covino collection, where nearly 800 postcards—roughly 20% of the collection—represent over 150 sites along and adjacent to Broadway. This exhibition presents a selection of these postcards organized spatially, as a map, and thematically, in eight galleries documenting the diverse institutions, businesses, and buildings found along Broadway, mostly at the turn of the 20th century. As such, this exhibition presents a snapshot rather than a history of what Walt Whitman elegized as a “mighty ever-flowing land-river, pouring down through the center of Manhattan Island!” in his essay Broadway, the Magnificent (1856). (3)

The oldest north-south thoroughfare in New York City, Broadway originated from the Wickquasgeck trail created by Native Americans. 17th century Dutch settlers expanded the trail’s southern portion into Heere Straat (Gentleman’s Street), later renamed Broadway Street by the British. Throughout the 19th and early 20th century Broadway evolved in tandem with the city’s northward expansion and rapid urbanization, encapsulating its civic development via City Hall, its economic modernization as embodied by Wall Street and the first corporate towers and commercial buildings of lower Manhattan, and its public spaces through string of now-iconic urban parks and squares. The city’s oldest church, St. Paul’s Chapel, is just one of a series of churches along Broadway. Its commercial and retail districts, particularly from Herald Square to Times Square, featured dozens of hotels and restaurants—exoticized Asian and tropical dining themes are especially well-represented in the collection—including the opulent ‘lobster palaces’ that arose in Broadway’s theater district in the late 1890s. Broadway’s cultural institutions documented in the collection encompass more than its metonymic theaters, stretching from the old Metropolitan Opera House and Lincoln Center in midtown to the Cloisters in Inwood and Van Cortland House in The Bronx. Educational institutions along upper Broadway include Columbia University, Barnard College, and Teacher’s College.

Together, these postcards attest to the timelessness of Broadway’s allure as a dynamic, complex laboratory of American culture and democracy. As Whitman presciently observed nearly 150 years ago, Broadway “will never fail in riches, arts, men, women, histories, stately shows, morals, warnings, wrecks, triumphs—the profoundest indices of mortality and immortality.” (4)

Films
The following early films, held by the Library of Congress, depict scenes along Broadway at the turn of the 20th century: