Nicholas Mirzoeff, "The Space of Appearance: Infrastructures of Whiteness"

Nicholas Mirzoeff delivers a free, public lecture as part of the Intra-Disciplinary Seminar series that asks how whiteness and white supremacy have been able to reproduce themselves. It takes its direction from Kwame Nkrumah's injunction to "face forward" to bring together the practice of multi-screen moving image installation and media theory of infrastructure. Nicholas Mirzoeff looks at how museums, monuments, and formal spaces of incarceration interact to sustain regimes of segregation, taking examples ranging from Danish refugee detention centers to the American Museum of Natural History, Rhodes Must Fall, and the Great March of Return in Gaza.

Nicholas Mirzoeff is a visual activist, working at the intersection of politics, race and globa 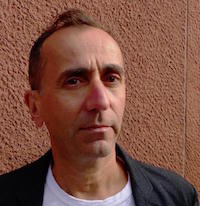 l/visual culture. Among his recent publications are The Right to Look: A Counterhistory of Visuality (2011) and How to See the World (2015). His new project, The Appearance of Black Lives Matter, was published in 2017 as a free e-book, and in 2018 as a limited edition print book with the art project “The Bad Air Smelled Of Roses” by Carl Pope and a poem by Karen Pope, both by NAME Publications, Miami. Since Charlottesville, he has been active in the movement to take down statues commemorating settler colonialism and/or white supremacy and convened the collaborative syllabus All The Monuments Must Fall. A frequent blogger and writer, his work has appeared in the New York Times, the Guardian, Time and The New Republic.

Photo of Nicholas Mirzoeff by MTL+.