Cornerstones of Democracy: From Domination to Partnership 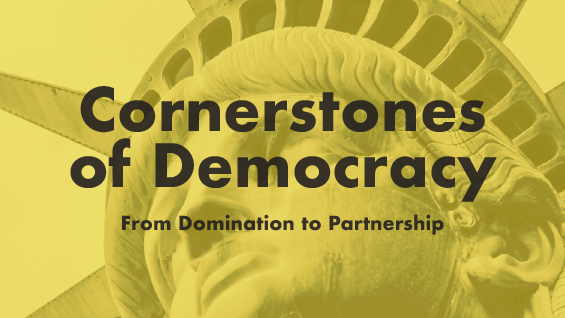 The Center for Partnership Studies presents a a free, public conversation that will describe what the four cornerstones of family, gender, economics and narratives can look like when grounded in the values of Partnership.

"When the present Domination System is replaced with the Partnership System, the very foundation of our democracy will be revealed, as The Preamble of the Constitution is a Partnership vision. The event will illustrate how the cornerstones support an Integrated Progressive Agenda, an agenda that promotes a more just, tolerant and inclusive society."
-- The Center for Partnership Studies.

The event is open to the public but reservations are requested.

Dr. Riane Eisler is President of the Center for Partnership Studies and is internationally known as a systems scientist, an attorney working for the human rights of women and children, and author of several books. She lectures worldwide, with venues including the United Nations General Assembly, the U.S. Department of State, Congressional briefings, universities, corporations, conference keynotes, and events hosted by heads of State.

Jamia Wilson is an American writer, commentator, and feminist activist based in New York City. She is the Executive Director and Publisher of the Feminist Press at CUNY. Wilson is the youngest director in the Press's 47-year history, as well as the first woman of color to head the organization. Jamia has been recognized as one of the “17 Faces of the Future of Feminism” by Refinery29.

Laura Flanders is a best-selling author and broadcaster. After many years in public and commercial radio, she founded The Laura Flanders Show / GRITtv in 2008 to serve as an online channel for in-depth conversations with forward-thinking people from the worlds of politics, economics, business and the arts. Flanders is a contributing writer to The Nation and Yes! magazine.

Tony McAleer is executive director of Life After Hate and shares his practice of compassion as a presenter of LAH's Kindness Not Weakness curriculum. Former organizer for the White Aryan Resistance (WAR), Tony served as a skinhead recruiter, proprietor of Canadian Liberty Net, and manager of the racist rock band, Odin’s Law. Tony's love for his children led him on a spiritual journey of personal transformation eventually bringing him to a place of compassion and forgiveness.

Friedrike Merck (moderator) has been a political activist, philanthropist and artist for over forty years. She is most recently a Senior Advisor tor Dr. Riane Eisler. Her maternal ancestors helped write the country’s founding documents, established the Abolitionist Movement and formed the Anti-Slavery (Republican) Party.