Architecture from a New Angle

Diana Agrest, Professor at The Irwin S. Chanin School of Architecture, whose long career includes architectural practice, writing, scholarship and teaching has added yet another hyphen to her skill set: filmmaker. The Making of an Avant-Garde: The Institute for Architecture and Urban Studies, 1967–84, a 67-minute documentary film she wrote, directed and produced, will be screened in the Great Hall on November 13 at 7 PM. The screening is free and open to the public.  The screening will be followed by a discussion with the filmmaker moderated by Anthony Vidler, former Dean of the school and a former Fellow of the IAUS.

The film chronicles the rise, fall and lasting influence of an organization Prof. Agrest knew intimately, The Institute for Architecture and Urban Studies, where she was a Fellow for over twelve years. Founded in New York City by Peter Eisenman, the Institute fomented new approaches to thinking about architecture and urban design at a time when a growing number of people in the field were questioning those disciplines' long-held precepts. The IAUS attracted an international group of key people that would go on to redefine architectural practice and theory. Peter Eisenman, Frank Gehry, Rem Koolhaus, Richard Meier and many others offer their recollections in the film. We sat down with Prof. Agrest for a chat about the significance of the IAUS and how she came to make a film about it. 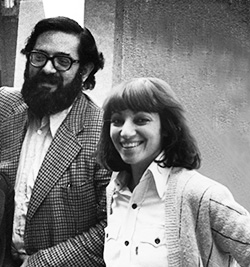 How did the IAUS come about?

In 1967, when the Institute was founded, there were political revolts around the world and new ideas and approaches were being developed in every field. At the time, Functionalism, based on the principle that "form follows function," was the prevailing approach to architecture. But that architectural ideology had run its course. It was finished; bankrupt. In all parts of the world people were coming to this same conclusion in different ways. Meanwhile, New York City was literally bankrupt. When I came to New York in 1971 no one came to New York. And as far as architecture or urban planning was concerned there was nothing here. People went to London or to Berkley. So there was a void. Peter Eisenman realized that there needed to be a place between practice and academia for architecture here. So he started the Institute for Architecture and Urban Studies at a time that turned out to be the right moment for it politically and culturally.

What has been the lasting impact of the IAUS?

This Institute did, without realizing it, many things that had never been done before. It created Oppositions, a magazine different from any architectural magazine that had existed before, certainly in the US, that was about "ideas and criticism in architecture." It set a very high bar for the level of discourse in the field. I still go back to some of the Oppositions issues when I need to look at something for reference. It was the most influential publication at the time and for a very long time since. We also started education programs for undergraduate and graduate students who spent a whole year at the Institute. They had courses in history, theory, urbanism, structures and studio. The programs we created were consistent with our concerns and our questions and very different from the prevailing approaches to architectural education. Many of those students went on to study architecture in other schools and they were seen as "the smart guys" because they had been exposed to a way of looking at architecture that was a little bit different or even ahead. We also created Open Plan, a program of lecture series for the public at large that was based on the principle of "making architecture part of American culture."

What connections does The Cooper Union have with the IAUS?

The Institute and Cooper had no formal relationship but they were always very close. They were close because [former Dean] John Hejduk was part of the Five Architects that included Peter Eisenman, who also taught here. John Hejduk was himself embarked on a critical approach to architecture so there was a common ground. He attended many of the Institute events. I myself then started teaching at Cooper and we sent students from IAUS to Cooper upon their graduation. We had students who already had an undergraduate degree from other colleges but would do a whole other undergraduate degree just to be at Cooper. [Visiting Professor] Joan Ockman (AR'80) is one such case.

How did you come to make a film about the IAUS?

Film has always been my fantasy career from very, very early on. When I first came to New York I went to NYU to check the film programs. But I realized it was a full-time occupation and I thought, "Am I switching careers?" So I decided I would just do work on my own. I bought a Super-8 camera and editing equipment. All the archival footage in the film is mine. But life gets complicated and I focused on other things. Then ten years ago I started thinking about making a film about the Institute. Already 20 years had passed since the Institute closed. It seemed like a good time. Nobody was talking about it. Nobody really remembered it existed anymore. I wanted to make a film and here was something I could handle. It seemed like an accessible project to me because I had been on the inside as an active participant and an observer, plus I already had my own footage, which is the only footage that exists of the place.

You are known for examining film in relation to urban studies.

I studied film theory intensely on my own. As I was trying to develop a critical work to current existing urban theories film and film theory became one of the most important elements. Historically painting had been the art referent for architecture but I thought that film was the pertinent referent for the city. It seemed obvious to me that there were great analogies between film and the city . The city can be seen as the articulation of many different systems including cultural, political, social, artistic etc. Film can be seen as analogous to the city in its own articulation of different systems such as fixed images, moving images, narrative, sound music and so on. Furthermore, film also deals with time, movement and narrative that are essential to the city, but that were not incorporated into architectural or urban discourse. Architects always left out those dimensions and that's why I was so fascinated with film.

What are your hopes for The Making of an Avant-Garde?

I would like it to have as much distribution as I can. It is of interest not only to young architects and students who are not familiar with this important chapter of American architecture, but also to a wider public as it is a story of new York's cultural scene at the time. Public television would be my most desired venue. For now, I get invitations to have the film screened. So far there will be screenings at Yale, Los Angeles and Brazil this coming spring. I have to learn how to "sell" this. It is not unlike architecture where you have to sing and dance your own song all the time. But this is a new song for me. It took me almost nine years to do it. A film is a construction, like a building, and some buildings take that long too. I can't believe I did it.