The work of the Fall 2017 Architectonics Studio – in other words last year's incoming class to The Irwin S. Chanin School of Architecture – has been awarded a 2018 Studio Prize from Architect, the Journal of the American Institute of Architects, as one of, "the best examples of architectural investigation taking place in colleges and universities today." The prize, which was open to any such architectural program in both the U.S. and Canada, awarded six such studios the honor this year. Notably, four of the other five winning studios were graduate level, and the sixth was made up of fifth-year undergraduates, while the Cooper students' work represents their first undergraduate effort during their first semester. [See sample works at bottom]

"I couldn't be more proud and grateful for this class and their incredible work ethic," says Mersiha Veledar, assistant professor, who led the studio, co-taught by Yasmin Vobis, visiting professor II, and Alexa Tsien-Shiang, assistant professor adjunct. "I knew the moment I met this group of individuals, that they were an incredibly gifted class that was hungry to excel and to learn. By the end of this studio for example, each individual student manifested close to 25 thoroughly developed drawings, three critical models and numerous animations, demonstrating the development of a single continuous concept that was also counter-challenged by a structurally inspired framework. The studio was additionally guided through an animate inspired method of iterative thinking, where even the most surreal experiment could become inhabitable, tectonically developed and constructible. If you take into account that they had zero a priori training as architects at this level, it was a massive undertaking to lead a studio this ambitious so early on in their education and one that could have failed very easily." 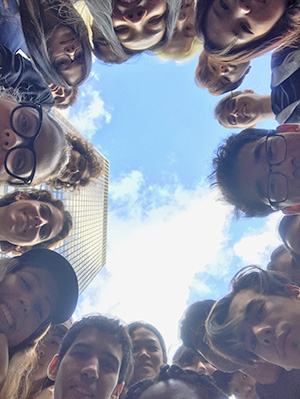 For a glimpse into how this lauded semester began for one of these students, see last year's Week One feature.

Titled "Animate Archi-Tectonics: Structural Configurations between Lines, Planes, and Volumes," the students examined each of these three basic design elements as a separate phase of the studio, with each phase iterating on the work of the phase before it. At the end the students presented a portfolio of works and had to provide a narrative behind their overall project. Thus, in their very first semester they were introduced to the demanding program of the school, as well as its pedagogy of arguing for their work. "The studio established a feedback loop across various media to explore the fundamental tectonics of architectural space and representational thinking. In so doing, the students developed their own vocabularies of construction and representation," Alexa Tsien-Shiang says.

The format of this introductory studio has been revamped under Nader Tehrani, dean of the school since 2015. He sees the Fall 2017 Architectonics studio as the first in which his agendas as dean have taken form. "This was an opportunity to open up the studio to interact with other courses and faculty, in particular to demonstrate the agency of representational techniques, via descriptive geometry, to inform the generative potential of an architectural idea: from line, to plane and to the three-dimensional volume," he says. "But more importantly, this was also an opportunity to explore the connections these abstract processes of drawing have with structural typologies, establishing a meaningful relationship with statics. Mersiha, Alexa, Yasmin, and I worked over the summer to organize the studio; I credit them with their responsiveness to the brief and the ambitions of the larger narrative. I also credit the students, as an entire body, because of their focused exploration of a vast array of experiments—with a sense of risk, openness, and courage.”

Yasmin Vobis, the third of the co-professors, recalls that, "one of the exciting parts of teaching this introductory studio was that at its heart were preoccupations fundamental to our discipline, such as how architectural and spatial ideas form, and how we build these. I think to everyone's surprise, the seemingly innocent studio arc -- from lines to surfaces to volumes -- unpacked a dense set of historical and contemporary approaches to building."

The Studio Prize was awarded by three practicing architects who reviewed the submissions that had been stripped of any identifying names. "I truly appreciate the stern ethical fairness behind this award," Veledar says. "The Studio Prize review was also limited to highlighting three key projects and the hardest challenge for me was in deciding how to edit and focus the work to capture the complete conceptual rigor and the immense deliverables of this semester as indicative of the overall array of works accomplished by these industrious students." The works submitted were titled "Bundled Matrix," by Jiwon (Jenny) Heo, "Rotations, Voids and Spatial Inflections," by Xinyi (Cindy) Guo, and "Tectonic Rhizome," by Sidney Hoskulds-Linet. Under the terms of the award a $5000 prize will be distributed between the three students whose work was chosen as representative of the studio. The judges called the work "beautiful," adding that it suggests "there is another way to see, study, and speculate about form and shape."

Veledar describes the work of the studio as, "Innovative, ambitious, experimental  and devoted to the discipline of architecture. In my experience, if you treat students respectfully and with militant responsibility as fellow architects right away, they usually skyrocket to the challenge through the trust and guidance we instill in them.”