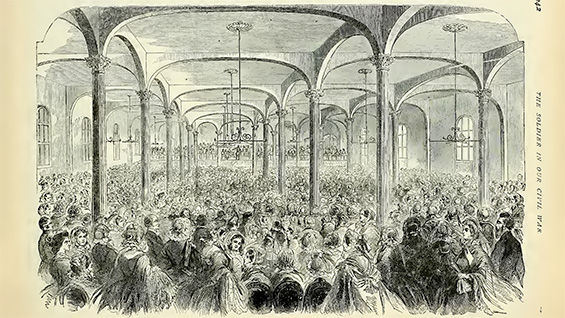 An uncredited illustration of the first gathering of the Women's Central Association of Relief, appearing in "Frank Leslie's The Soldier in Our Civil War", Vol. 1 pg. 242

On April 29, the Women’s Central Association of Relief (WCAR) is founded at The Cooper Union to collect donations of items and funds for the comfort of Union soldiers. This would include training nurses to be deployed at military hospitals. Two months later the organization would be incorporated into the U.S. Sanitary Commission (USSC) as one of a number of federally-organized wartime relief efforts. Both the WCAR and the USSC would be dissolved in 1865.

Offices of the Sanitary Commission were located in the Foundation Building and quilt crafting for donating to Union soldiers was incorporated into the curriculum of the women's school. At least one such work survives.