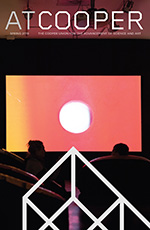 100 + Years of Student Representation
As The Cooper Union celebrates the 160th anniversary of its founding, another notable milestone has also been reached in 2019: the 110th year since the creation of the institution’s first self-organized student representative body

Archive & Artifact: the Virtual and the the Physical
Images from the exhibition mounted in Fall 2018, celebrating The Irwin S. Chanin School of Architecture’s experimental and influential pedagogy by presenting undergraduate thesis projects completed at the school over the past 50 years.

Saturday Program at 50
Saturday Program has been around for decades, providing thousands of underserved local high school students the chance to get a taste of art school at no cost to them. But its exact origins were in doubt... until now

Seven Cooper Alumni Chosen For Whitney Biennial
Works by Brian Belott A’95, Meriem Bennani A’13, Robert Bittenbender A’12, Tomashi Jackson A’10, Eric Mack A’10, Keegan Monaghan A’08, and Wangechi Mutu A’97 will be shown

160th Anniversary!
Watch for this logo throughout 2019 as the cooper union celebrates its history and
Its future

Investigations Into Color
Sarah Lowengard and Christina Weyl, both adjunct professors in the faculty of humanities and social sciences, have received prestigious fellowships to examine the history of color

You Are Here.
Two 2018 school of art alumni explore decolonization and placemaking at the “Queens International 2018,” a contemporary art biennial at the Queens museum

Letters to the President