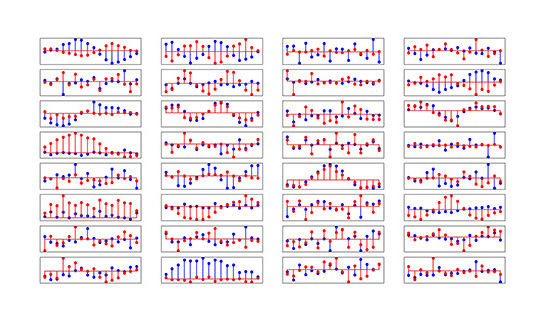 A simplified snapshot of some of the patterns that the Cooper team's neural network learned to recognize when searching their data.

This summer a team of three recent Cooper electrical engineering graduates—Tom Koch, Cory Nezin, and Sahil Patel (all Class of 2018)—placed tenth in the 2018 Army Rapid Capabilities Office Signal Classification Challenge out of a field of 161 teams from industry, universities, and government organizations from around the world.

The competition was organized by the MITRE Corporation, a a federally-funded research and development center, which ran the competition on behalf of the United States Army. The goal was to apply artificial intelligence and machine-learning algorithms to classify and characterize signals in order to help soldiers in war zones discern important messages from irrelevant ones.

Michael Kumaresan, a 2010 graduate of the Nerken School of Engineering, works as an analytics engineer for MITRE and teaches as an adjunct professor at Cooper. Knowing that several Cooper students had been working on signaling technology, he invited them to participate in the highly-competitive challenge. According to Professor Kumaresan, who holds a doctorate in mathematics, engineers find radio signal classification problems particularly difficult to solve. With the competition, the army hopes to understand the current state of research and to encourage more work on the subject.

According to Professor Fred Fontaine, the high-level interest in this research means that the Cooper team will be meeting with competition organizers to discover "what methods they used, what challenges they had, and perhaps continue such conversations to push the state-of-the-art forward."