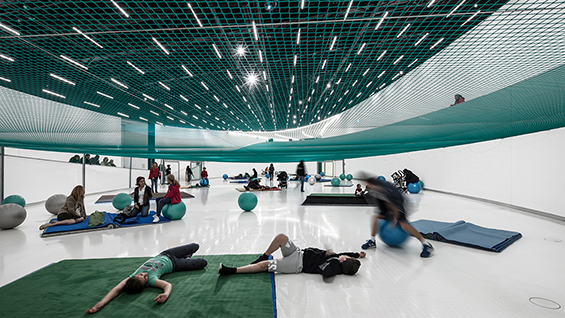 Levete trained at the Architectural Association and worked for Richard Rogers before joining Future Systems as a partner in 1989, where she realized ground-breaking buildings including the Media Centre at Lord’s Cricket Ground and Selfridges department store in Birmingham. In 2009 Levete founded her London-based practice AL_A. She frequently contributes to radio and television programs and writes for major publications, and has lectured around the world. For over a decade she served as a trustee for influential London nonprofits the Young Foundation and Artangel. A Stirling Prize winner, she was appointed a Commander of the Order of the British Empire in 2017.

In this Current Work lecture, Levete will cover two prominent cultural projects, the Victoria and Albert (V&A) Museum Exhibition Road Quarter and the Museum of Art, Architecture and Technology (MAAT) in Lisbon. For the V&A in London, AL_A created a new entrance, a public space, and gallery— the museum’s largest building initiative in more than a century. Awarded through a competition, the project features the world’s first porcelain courtyard. MAAT is a low-slung, tile-clad building that invites visitors onto its roof, creating a major new public amenity on the banks of Lisbon’s Tagus River.

Current AL_A projects include Galeries Lafayette in Paris, Wadham College in Oxford, UK and The Courtyard in Moscow.