Paul A. Volcker, Former Chairman of The Federal Reserve System 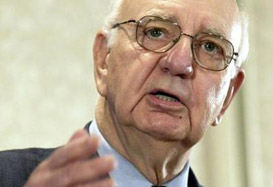 Financial legend Paul Volcker, former Chairman of The Federal Reserve, will talk about the current state of our economy at The Cooper Union.

This lecture is made possible by the Benjamin Menschel Distinguished Lectureship, established with a generous grant from The Horace W. Goldsmith Foundation. In its 11th year, this highly regarded lecture series has provided a public platform for some of the most renowned scientists, historians, economists and intellectuals of our time.

Paul A. Volcker worked in the United States Federal Government for almost 30 years, culminating in two terms as Chairman of the Board of Governors of the Federal Reserve System from 1979–87. He went on to serve as Chairman of Wolfensohn & Co. for ten years, as well as Professor of International Economic Policy (now Emeritus) at Princeton University. From 1996–99,Mr. Volcker served as Chairman of a committee to determine existing dormant accounts and other assets in Swiss banks of victims of Nazi persecution and, from 2000–05, as Chairman of the Board of Trustees of the International Accounting Standards Committee. In April 2004, he was Chairman of an inquiry into the United Nations Oil-for-Food Program and, in 2007, oversaw a panel of experts to review the operations of the Department of Institutional Integrity of the World Bank. Mr. Volcker served as Chairman of the President’s Economic Recovery Advisory Board from 2008–2011.