Kaja Silverman: a Conversation (Part I) 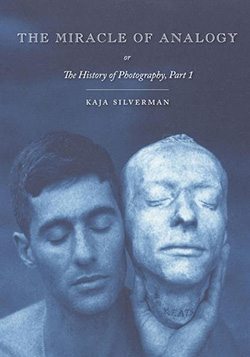 This seminar concentrates on the works of Kaja Silverman, and more particularly her recent book The Miracle of Analogy or The History of Photography, Part 1.  The seminar will be structured as a conversation between Walid Raad and Kaja Silverman.  Raad and Silverman will ask and hopefully answer each others’ questions about photography, psychoanalysis, ideology, writing, and other creative acts.

Kaja Silverman is the Keith L. and Katherine Sachs professor of contemporary art at the University of Pennsylvania, and the author of nine books: The Miracle of Analogy, or The History of Photography, Part 1 (2015); Flesh of My Flesh (2009); James Coleman (2002); World Spectators (2000); Speaking About Godard (1998); The Threshold of the Visible World (1996); Male Subjectivity at the Margins (1992); The Acoustic Mirror: The Female Voice in Psychoanalysis and Cinema (1988); and The Subject of Semiotics (1983).

Silverman’s new book, The Miracle of Analogy, which was published by Stanford University Press in March, 2015, is the first volume in a three-volume reconceptualization of photography. The Miracle of Analogy is primarily concerned with the nineteenth century and some of its contemporary progeny. The second volume, Intelligent Cohabitations, which Silverman hopes to complete by June 2016, addresses the relationship between photography and painting in the period extending from 1839 to 1960, and the shifting status of the "pictorial." The Promise of Social Happiness,  which is half-written,  is focused on the re-emergence of pictorial photography in the second half of the twentieth century, and the first decades of the twenty-first, through two closely-related forms:  photo-painting, and large-format photography.

Before joining the History of Art Department at Penn, Silverman taught at Berkeley for many years. Earlier in her career, she taught at the University of Rochester, Brown University, Simon Fraser University, Trinity College, and Yale University.

Silverman was recently awarded a Distinguished Achievement Award by the Mellon Foundation, and has been using it to fund a series of conferences, lectures, public conversations and artist residencies, along with a Knut Asdam exhibition, that included a commissioned work. All of these events have taken place at the University of Pennsylvania, in collaboration either with the ICA, the Slought Foundation, or the Philadelphia Museum of Art.