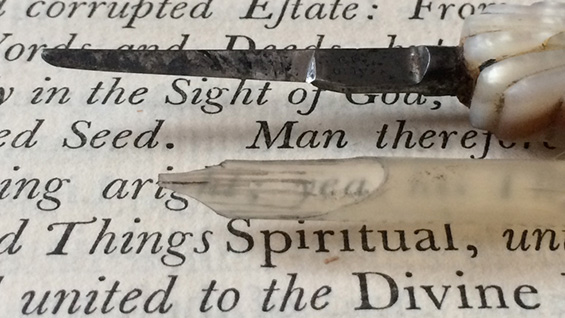 Detail of a 1765 edition of Robert Barclay's 'Apology for the True Christian Divinity,' printed by John Baskerville

When Beatrice Warde wrote her review of John Baskerville's types in The Monotype Recorder nearly a century ago, she mentioned his debt to the world of the eighteenth century writing masters. In this lecture Ewan Clayton picks up this theme. He examines Baskerville's typeface work in that context. What we discover is a forgotten tradition of handwritten romans that stretch back to the late sixteenth century. John Baskerville was familiar with these forms and his re-engineering of the printing process opened up a channel that permitted them to flow once more into the mainstream of type development.

Ewan Clayton is a calligrapher and part-time Professor in Design at The University of Sunderland where he co directs the International Calligraphy Research Centre. He grew up associated with a community of craftsmen at Ditchling in Sussex founded by Eric Gill. Ewan has enjoyed a varied professional career working as both a calligraphy teacher and a consultant to Xerox PARC, and he is currently a core faculty member at the Royal Drawing School in London. In 2013 he was awarded the first Karl-Georg Hoefer prize by The Schreibwerkstatt Klingspor for his work in calligraphy and education. His book on the history of calligraphy and typography 'The Golden Thread' is out in paperback this year in the USA and has recently been released in Spanish and Italian translations.

Free and open to the public. RSVP requested.

Ewan Clayton appears as part of the Herb Lubalin Lecture Series of Type@Cooper. The series is sponsored by the Herb Lubalin Study Center of Design and Typography at The Cooper Union, a public graphic design archive which places emphasis on a hands-on access to a wide range of design and typography ephemera.