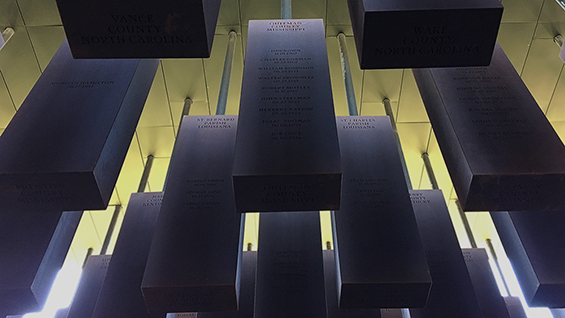 Monuments have recently re-emerged as charged sites of political debate and struggle. Propelled by a wave of protests against police killings of unarmed African Americans, monuments representing histories of oppression have been toppled, and new monuments commemorating Black lives erected. Simultaneously, many of the simmering conflicts and equations between indigenous understandings of land and sovereignty, colonialism and white supremacy, have brought needed attention to the troubled creation and legacy of a wide array of monuments in the United States. These include not only statues devoted to the ‘heritage’ of the Southern Confederacy, but the many American monuments celebrating America’s ‘founding fathers’ ‘manifest destiny,’ ‘exceptionalism,’ and ‘pioneering’ of the ‘frontier.’ What politics are at play in the historical cycles of constructing and removing such monuments? Are contemporary debates over monuments merely the symptom of a liberal politics of representation or can monuments instigate change by catalyzing thought and action towards greater understanding and justice? By upending certain binds of form and content in the monument, the speakers at this event will examine the relationship between the architecture and aesthetics of monument-making, and its political effects.

The lecture will be followed by a live debate and conversation moderated by Steven Hillyer.

Irene Cheng is an architectural historian and an associate professor at the California College of the Arts. Her research explores the entanglements of architecture, culture, politics, and the environment in the nineteenth and early twentieth centuries. Her most recent publication is Race and Modern Architecture: A Critical History from the Enlightenment to the Present, co-edited with Mabel O. Wilson and Charles L. Davis II and published by University of Pittsburgh Press in 2020. The book is the product of a multi-year interdisciplinary research initiative directed by the editors called the Race and Modern Architecture Project.

Additionally, Cheng is co-editor with Bernard Tschumi of The State of Architecture at the Beginning of the 21st Century (The Monacelli Press, 2004). Her current book project, entitled “The Shape of Utopia: The Architecture of Radical Reform in Nineteenth-Century America" (forthcoming, University of Minnesota Press) explores the geometry of architectural projects affiliated with anarchist, socialist, abolitionist, free love, spiritualist, and other radical mid-nineteenth-century movements. The project has received generous fellowship support from the National Endowment for the Humanities, the Whiting Foundation, the Graham Foundation, the McNeil Center for Early American Studies, and the Massachusetts Historical Society.

Cheng is also founding principal of Cheng+Snyder, a multidisciplinary design practice that seeks to instigate critical debates about politics, architecture, and the city. Cheng + Snyder’s project "Museum of the Phantom City" was included in the United States pavilion at the 2012 Venice Biennale. The firm’s work has been published in Metropolis, Architectural Record, The Architect’s Newspaper, The New York Times, and in numerous books and blogs. Their work has been supported by fellowships and grants from the Van Alen Institute, the New York Foundation for the Arts, and the Ulm School of Design.

Cheng was the recipient of two teaching awards in 2019: Diversity Achievement Award from the Association of Collegiate Schools of Architecture, and an AIA SF Community Alliance Award.

Cheng previously taught at Columbia’s Graduate School of Architecture, Preservation, and Planning. She holds a B.A. in Social Studies from Harvard and an M.Arch and Ph.D from Columbia University.

Richard Sommer is a Professor of Architecture and Urbanism at the Daniels Faculty, University of Toronto. He recently completed two terms leading the Daniels Faculty as its Dean, quadrupling the school’s programs, and transforming a civic landmark in Toronto – One Spadina Crescent – to serve as its new home.

Before 2009, Sommer was a member of the architecture and urban design faculty at Harvard GSD for more than a decade, and was Director of the school’s Urban Design Programs. He has also held several other academic posts, including the O’Hare Chair/Visiting American Scholar at the University of Ulster, Scholar-in-Residence at the California College of the Arts; and visiting professorships at K.U. Leuven, Washington University, Columbia University, and Iowa State University.

Sommer founded a design practice, borfax/B.L.U. with collaborators in 1995. He is a member of the executive board leadership of PLACES Journal. His writings and projects have been published in Perspecta, JAE, The Harvard Design Magazine, and the books Shaping the City, Urban Design, Fast-Forward Urbanism, The Democratic Monument in America: A Twentieth Century Topography, and Commemoration in America, among others. Support for Sommer’s research has included awards and grants from the U.S. National Endowment for the Arts, The Wheelwright Fellowship, SSHRC Canada, and The Graham Foundation for Advanced Studies in the Fine Arts. In 2020 he received the Association of Collegiate Schools of Architecture’s  Distinguished Professor Award and was elected to the ACSA’s College of Distinguished Professors.

Sommer’s design, research, and writing, in addition to focusing on architecture in the context of broad trends in urbanization, has involved a multi-faceted project with Glenn Forley examining the transformation of monument-making in society’s aspiring towards democracy, with a particular focus on “America.” His current projects include NEW CIRCADIA: adventures in mental spelunking, a collaboration with Pillow Culture, NYC – an experimental cave-like soft utopia, mounted in 2019, and recently published in Cabinet Magazine, directing the Global Cities Institute at Daniels/UofT, and Toronto Housing Works, an experimental big-picture urban study and forthcoming immersive exhibition in collaboration with Michael Piper and others colleagues at the University of Toronto.  He is currently teaching a course at the Cooper Union with Glenn Forley on the history of monument-making and time-based architecture.