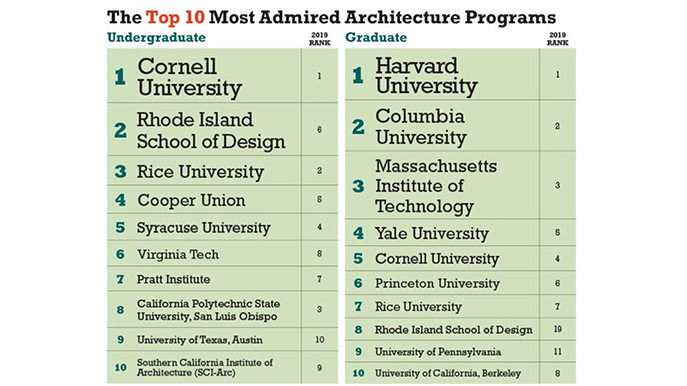 As reported by the Architectural Record, Cooper Union has come in fourth in DesignIntelligence’s survey ranking of most admired schools for Architecture. According to the organization’s 19th edition of the survey, this year’s metrics for evaluation have shifted from previously-used paradigms to reflect the changing landscape of the profession: “Each year, DesignIntelligence (DI) conducts a survey of America’s top architecture schools, ranking undergraduate and graduate programs from the perspective of practitioners who hire graduates of those programs. The survey is sent, via email, to DI’s expansive network of hiring professionals, who tell us which schools they Most Admire and Most Hire From and how recent graduates are performing in 12 skill areas.” Within these skill areas, Cooper Union’s undergraduate program was ranked #2 in both Design Theory and Research Skills.