Building a Model of Education

After a tremendous effort as part of an extremely ambitious Architectonics studio, the first-year students of The Irwin S. Chanin School of Architecture have succeeded in moving The Foundation Building. Not literally, of course, but working together in a profound display of collective energy and school pride they have hand-built a six-foot-high basswood scale model of the building's exterior (1/2"='1'-0"), mounted it on a rolling steel frame and taken it on a pilgrimage to the main branch of the New York Public Library at Fifth Avenue and 42nd Street by pushing it through the streets of Manhattan. They made a video of the project. The model will be on display in the first floor lobby of The Foundation Building until someone decides what to do with it. 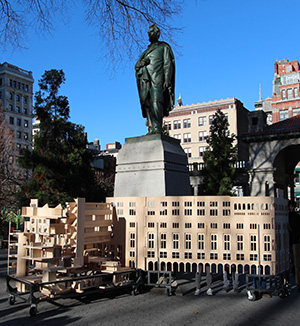 Calling it a "historic moment," that has "shifted our reading of this building and this institution," Professor David Gersten, who co-instructed the studio with Wes Rozen and Rikke Jørgensen, addressed the assembled students and guests at the final critique two days after the journey. A few minutes later, in their first "gesture" of the critique, all the students surrounded the model that dominated the third floor lobby. After all had placed their hands on it, a corner pin was taken out, a bolt removed, and in unison they opened the model, which is hinged at each corner, revealing an interior made up of each student's subjective expression of the studio space. Slowly the students completely unfolded the walls until they formed a single flat surface. From the front one could see their fingers extending through the windows in a striking contrast of scale as they stood shoulder to shoulder behind the opened building. 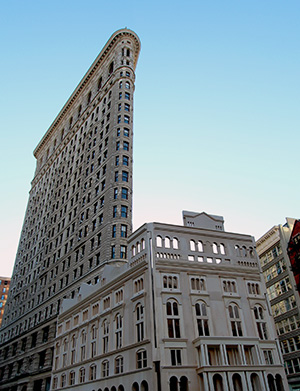 During a break in the critique Professor Gersten, who has taught at the school for over 20 years and co-instructed the first-year Architectonics studio for ten, spoke about the genesis of the work, officially titled, Building The Cooper Union: A Model of Education. "Every year we do a project. It always has to do with questions. How do we inhabit the question of the moment? This moment is a significant, historic hinge in the 155-year project of The Cooper Union," he said, referring to the shift from a full tuition scholarship for each entering student to a 50% scholarship. The latest class of 25 architecture students, all of whom make up the first-year Architectonics studio, is the first under that new policy.

"This year is a hinge, but there is always a structure and that structure is the students. It's the creativity, the ethics and the imagination of the studio. So we said, 'Well, what do we do now?' which is essentially to have faith and trust in the admissions process, in the idea of the project of The Cooper Union. And to assert that this is, in fact, a continuation of that project. We did that with the gesture of saying to this class, 'We want to place the school in your hands. You will measure it, draw it and build it.' We didn't know this group just 12 weeks ago, but we en-trusted them to do it. Together, as a social poetic act, we built a model of The Cooper Union because The Cooper Union is a model of education. We asked them to care for this model in the most profound sense of craft, of building it and, oh boy, this group worked really hard. They did it." 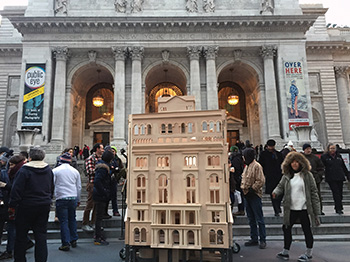 The instructors also brought the idea of taking the model on a journey to the students, who took it up. After some debate the studio decided on a route that would have cultural resonance to The Cooper Union. "We brought the model out to engage the city in duets: acts of gentle choreography making visible the long, deep linkages with the cultural institutions, people and monuments of this city,” Professor Gersten said.

They set out on a Sunday afternoon, stopping first at the statue of Abraham Lincoln in Union Square, drawing a reference to the historic speech he gave in The Great Hall. The second stop, in a traffic triangle across from the Flatiron Building, commemorated the location of The Concilliator, a short-lived construction based on a design by John Hejduk, the founding dean of the school. As the sun waned, they arrived at the foot of the steps of the main branch of the New York Public Library, an "institution of education and a sanctuary of knowledge that is free," Professor Gersten said. When they arrived they opened the model for all to see. After engaging the people and space in front of the library for a few hours, they closed it up and pushed it all the way back again through the darkened streets.

Two days later, at the critique, Professor Gersten lauded the collective effort of the class, saying: "Twenty-five people became one, learning the power of multiplication and the social contract." Toby Cumberbatch, a guest and professor of electrical engineering at the Albert Nerken School of Engineering felt moved to speak up. "Working together. Sharing. Listening to each other. That's the Cooper ideal. Fantastic work."