Making is Design: In Conversation with Situ Studio 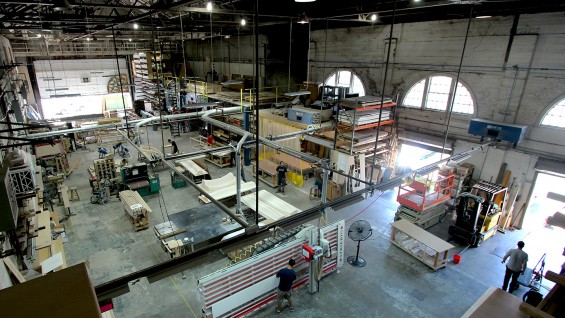 SITU Studio will present recent work followed by a conversation with Dean Nader Tehrani on Tuesday 6 October at 12pm in RM 315F.

SITU was founded in 2005 in Brooklyn, New York while its four partners; Basar Girit, Aleksey Lukyanov-Cherny, Wes Rozen, and Bradley Samuels (all AR 05), were studying architecture at the Cooper Union. Transitioning directly from school to opening an office, the classmates-turned-business-partners developed a model of practice that leveraged their collective interests to create a studio uniquely equipped to explore a wide range of spatial issues.

The practice is comprised of three divisions: SITU Studio, an architectural design firm; SITU Fabrication, a specialized digital fabrication company, and SITU Research, an organization dedicated to interdisciplinary spatial practice.  A collaborative and horizontal organization provides a landscape for creative cross-pollination between the divisions.

SITU was selected as one of six interdisciplinary teams to participate in the current MoMA exhibition Uneven Growth: Tactical Urbanisms for Expanding Megacities and recently presented L+ as part of a design study, Re-envisioning Branch Libraries co-sponsored by the Center for an Urban Future and The Architectural League of New York.  Built projects include Design Lab at the New York Hall of Science; Heartwalk, a public art installation made from salvaged boardwalk planks collected in the wake of Hurricane Sandy and has recently redesigned the lobby of the Brooklyn Museum.  The firm was a recipient of the 2014 Emerging Voices Award from The Architectural League of New York.

Suggested readings: Interview with the Architectural League of NY, Out of Control: Experiments in Participation

A lunch reception will follow in the 3rd floor lobby.

This event is open only to current Cooper Union students, faculty and staff.