What is a Monument? 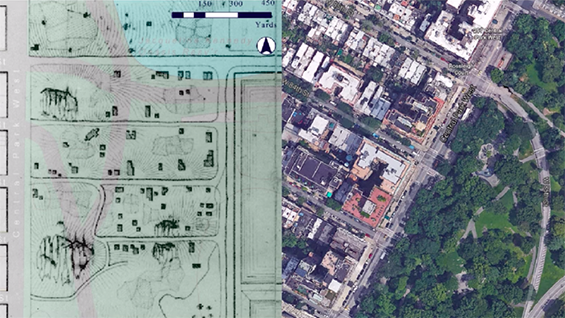 Still from Seneca Village: The Forgotten Community, by Laela Baker

For her fall 2020 History of Architecture course, Associate Professor Tamar Zinguer asked of her students: “How could a monument reflect the changing values of a dynamic society? Should a monument set in stone still stand if it reflects an intense amnesia and public forgetting? Does a monument need to be constructed, built and tangible, or could it be intangible, testifying to cultural heritage alone? Furthermore, could an artifact that is deemed to be a National Historic Landmark, for example, be relevant for a diverse society and reflect that all of history matters?”

The students, many of whom were residing outside of New York during the course, were prompted by Zinguer “to identify a site, or a building that interests you and…to research its history [and] present the contested ideas behind its appreciation or lack of it…” This research culminated in a 10-12 minute film created by each student as their final project for the course. Two of these films, made by students who remained in New York City, are presented here—Seneca Village: The Forgotten Community, by Laela Baker; and Deli: A Modern Monument of New York City, by Denise Cholula and Ru Jia.

Zinguer notes of Baker's film: “In 1825 African Americans began settling in Seneca Village, a five-acre plot of land from 82nd to 89th Street, between Central Park West and the road marking 7th Avenue before the Park was drawn. Some were upper middle-class citizens, who having become landowners, earned the right to vote and were politically involved. This community, which numbered close to 300 inhabitants by 1857 when their land was seized through eminent domain for the construction of Central Park, has been erased and largely ignored. In her film Laela Baker recounts the story of this impressive settlement, the site of which should be regarded as a historic civic monument.”

Cholula and Jia proposed for their monument a ubiquitous New York City institution—the deli. Tracing its origins from the 19th century Jewish delicatessen to its current multicultural incarnation as bodegas and corner stores, their film examines the deli’s design and its importance for neighborhoods and communities throughout the city.