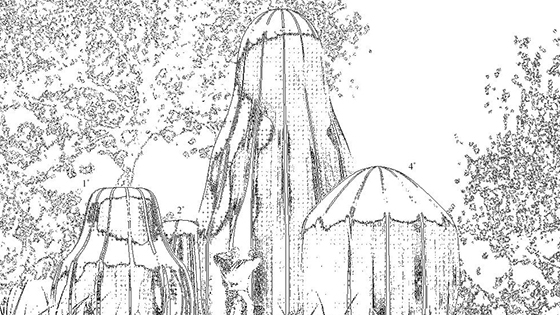 Binns and Cardona, who began collaborating roughly five years ago while attending the same magnet design high school in Miami, discussed their work, interests, and their recent submission to stp’s 2020 BFA Show, noting:

“Every time we make a new project, we try to do something that we haven't done before, so there's this large learning curve where we actually have to learn a new software or a new method of working…We're not in the art program at Cooper, we're actually in the architecture program but we don't necessarily segregate ourselves to just working in architecture. We're really interested in the fine line between architecture and art, or the point in even having a line there.”

As noted in a recent Cooper news article, both Serving the People and the BFA Show, which was initiated to showcase student artwork during the pandemic, are the work of School of Art graduates.

For the BFA Show, Two Dogs on a Leash submitted Untitled 2018 from a previous project addressing communal living, which they describe as akin to a “Christian kibbutz idea of multiple pods that aggregate together, each with an individual function, with a kind of hillside topography.” As an expression of their interest in the blurred distinctions between art and architecture, the project prompted the question: “How do you take architectural representation and push it more towards a scenographic experience? In a way, even though this isn't really a painting, we've always called it that. If you zoom in close enough, you can actually see a figure entering a home, and what entering that home would be like, pushing the walls in together.”