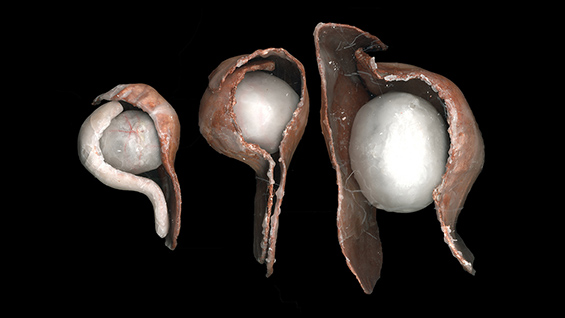 Farnoosh Farmer: A Body Within the Body

Body Dynamics: Corporeal Boundaries and Spatial Intersections
The subject of the body has deep roots in Western Architecture Theories from the texts of the renaissance reading of Vitruvius. From Alberti to Francesco di Giorgio Martino and Filarete, the body has been both a referent, a tool, and a construction in which the body (of man) is both a metaphoric and a metonymic construction as having perfect proportions and harmony based on nature in whole and in part. This embodiment of nature, thus God, is consistent with the transfer of the center from God to man. We can fast forward to the culture of disembodiment brought about as a result of cybernetics, information, mediatization, and in general Virtual Reality, in a world that is nothing but simulacrum and in which the body becomes, in its many forms of representation, a simulacrum itself.

In the long stretch in between there are all forms of architectural constructions of the body, from Ernst Neufert’s Architects' Data of 1936 to The Modulor by Le Corbusier of 1945 and 1955, or the implied control of the body in the earlier Radiant City of 1930 through the question of healthy bodies through sun, air, and open space. One could certainly say a lot about these narratives of control of the body in space related to the body as such, as a machine in a prevailing technocratic ideology, and the body as a tool for consumption and control of the space of habitation. But while these are meant to be social tools, one could still ask, what body is the body in question? A case in point being the role of the places and spaces affected by and/or affecting the body and modes of control, such as the institutions famously and vividly studied and portrayed by Michel Foucault in History of Madness, (1961) Discipline and Punish: The Birth of the Prison (1975), and the dimension of pleasure in The History of Sexuality (1976-84).

Or one could look at the body, in its corporeality and the pushing of the limits of the body itself, as in athletic activities and competitive sports, to previously unimaginable extremes, becoming at once actors and the subject of the spectacle, as in the Olympics, rock climbing, or cave explorations. Or the overcoming of its boundaries through the means of possible extensions, from those related to the senses to parts of the entire body through the possibilities afforded by constantly changing and advancing technologies that have gone from the mechanical to the digital. This includes all forms of prosthetic devices, some remedial and some just expansive, per se, becoming actually cyborgs as Haraway so vividly prognosticated in her famous essay, “A Cyborg Manifesto” of 1985.

But again, what body? The question is that of difference as opposed to the universalization of an abstract (male) body. There are differences of all kinds, starting with questions of sex and gender, which touch on the most profound forces that travel through fluids and synapses traversing the whole body in billions of possible routes, rhythms, and outcomes, each unique. But this body is affected if not completely determined by socio-political, economic, cultural, and ideological environments and enacted in diverse places and modes of habitation. Two aspects that consider difference is that of the body as it relates to questions under the general rubric of health and food. This studio articulates these three issues: body, health, food, focusing on their articulation and intersecting boundaries.

From this research and individual interests narratives are incorporated through which, in a process of transformation, a project is developed. In this process projects address simultaneously the specific object of study as described above and its relation to architectural discourse today.

Project topics include: Intimate Bodies; Dynamic Domestication: Transformative Evolution of the Human Body Through the Body–Object Relationship; A Body Within the Body; Envisioning a Human-Machine Collaboration; The Dancing Body as a Social Body; Adaptation at the Limits: A Transitional Habitation Without Gravity; Haptic Skateboarding: Tracing the Forces at Play from Surface to Volume; The Body Expanded; and Confinement, Exposure, and Liberation of the Female Body: The Transformation of a Fabric into a Woman’s Personal Space.

A Body Within the Body

In the article “This Sex Which Is Not One,” Luce Irigary argues that conceptualization of female sexuality is based on masculine parameters—a position which is applicable to architectural studies as well. Historically, the female body has been neglected in human anatomy studies and consequently in architectural standards that were based upon the human body. This project focuses on the female body as it goes through the transformation of reproduction. This transformation is most apparent during pregnancy as the female body goes through both physical and non-physical alteration as a new body develops within it. This prompts changes within the mother’s body by creating the conditions and environment for the new body’s development and growth and for the close interaction between these two bodies for nine months. A temporary vital organ, the placenta, develops during pregnancy in the female body as a mediator between mother and fetus. The umbilical cord emerges from the placenta as the connecting channel between them. It is through this organ that all transactions concerning oxygen, nutrients and hormones, as well as most other exchanges in this process, are made possible.

This project considers specific moments in this process as architectural phenomena: the restructuring of one body and the structuring of another one. The moment of birth is the ultimate culmination of this process. When the fetus leaves the womb it enters an environment external to the mother’s body and the umbilical cord is cut. From the female body, seen as a place of nourishment, another male or female being will be born.

This research focuses on a specific lower limb prosthesis as a parameter to reveal interwoven affiliations between the metabolism of a human body and emerging cybernetic issues arising from an ecological perspective. By converting this research into a transformative process, the issue has been addressed focusing on the body of a sumo wrestler, which is a particular body designed to create a manufactured sports, including related obesity, includes the relationships between their unique life routine and the specific features of their body fat. The goal of this exploration is to develop and design a multilayered prosthesis for improving the post-sport life of the sumo wrestlers in reintegrating to a non-sport healthy everyday life from the physical, physiological and psychological conditions of their bodies.