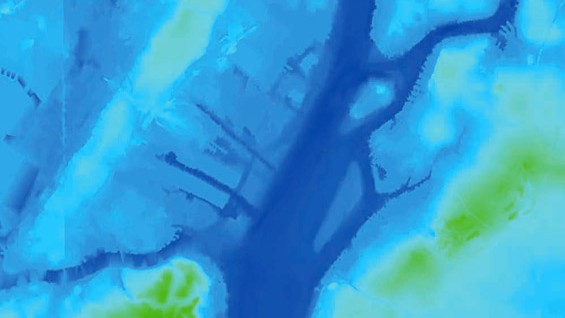 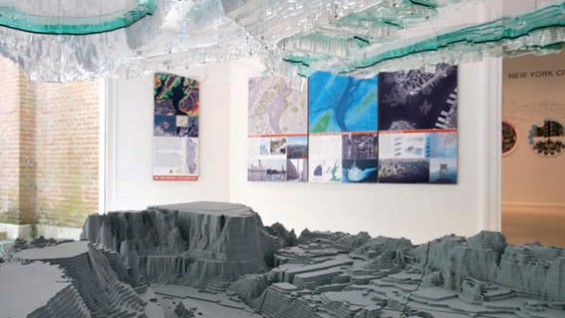 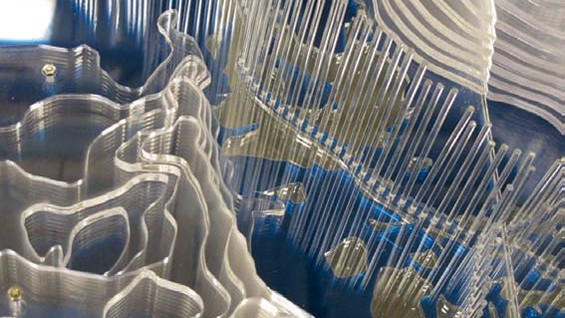 With the Asian Tsunami in 2004, and Hurricane Katrina the following year, the destructive power of the sea moved to the forefront of the collective psyche. If the lingering images of the devastation in Southeast Asia, and in New Orleans and along the Gulf Coast, aren’t a vivid enough reminder, Hollywood has provided numerous fictional examples; New York City alone has been destroyed by the sea in such films as When Worlds Collide (1951), Deep Impact (1998) and The Day After Tomorrow (2004).

While water-induced destruction seems far removed from daily life on the streets and avenues of New York City, the effects of climate change have merited the attention of local engineers, architects and landscape architects seeking ways of mitigating damage from sea level rise, flooding and storm surges. From March through October 2010, an exhibition called “Rising Currents: Projects for New York’s Waterfront” was on display at the Museum of Modern Art in New York City. Rising Currents was the culmination—along with a companion book called On the Water: Palisade Bay—of the long time research of Cooper Union graduate Catherine Seavitt in collaboration with her husband, structural engineer Guy Nordenson, and Adam Yarinsky, principal and co-founder of Architecture Research Office. 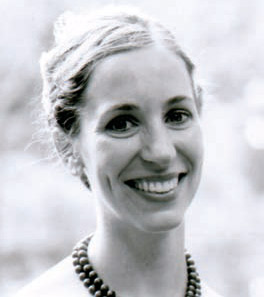 The New York-New Jersey Upper Bay (renamed “Palisade Bay” for the purposes of the team’s research) has a surface area of approximately 20 square miles.Within the next 50 years, the bay “is likely to see its waters rise by as much as one foot as a consequence of global climate change. In the next one hundred years, that rise could be as much as two feet,” according to On the Water: Palisade Bay. “Because of a higher baseline of water, the frequency and extent of flooding due to severe storms—hurricanes, tropical storms, and nor’easters—will increase dramatically.”

In a greater metropolitan area of an estimated 20 million people, preparing for these effects is paramount. What the Palisade Bay team proposes, in contrast to the typical reaction to rising sea levels—a hard infrastructure of seawalls, bulkheads and storm surge barriers—is a “soft” infrastructure that balances “environmental, technical and economic priorities.”

Seavitt’s interest in the relationship between land and water can be traced to 1997, when, as a recipient of the Rome Prize in Architecture, she spent a year examining the relationship between Rome, the Tiber River and the Tyrrhenian Sea. “I studied both the ancient and the Mussolinian ‘modern’ connections of Rome to the sea,” she says. “I got more and more fascinated with the Tiber River itself, its wandering route, and its urban course in the city of Rome, which got walled off in the late 19th century after some devastating floods. This has essentially severed the river from the city.” Seavitt’s year in Rome took her some 4,500 miles from her hometown of Detroit, MI, where she was born in 1969. The daughter of mathematicians, she was raised in what is now the historic Boston-Edison neighborhood of the city. She was introduced to architecture as a profession in a high school drafting class, where she learned about hidden lines and line weights. After high school Seavitt attended the University of Michigan, majoring in dance before being admitted to the school’s pre-architecture program. It was in her junior year studio that she heard about a school in New York City—The Cooper Union. 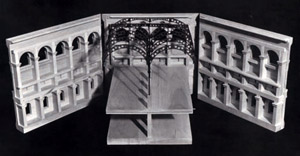 In 1991, as a third-year transfer student, Seavitt undertook an analysis of Henri Labrouste’s Bibliothèque Sainte-Geneviève in Paris under Richard Henderson.The next semester, she developed her drawing skills in a studio with Tony Candido. The following year, she studied under Peter Eisenman, who she describes as one of the finest teachers of architecture she’s known, and Raimund Abraham, who she describes as perhaps her most influential teacher.

“Raimund opened our minds to the power of architecture and the abstraction and poetry that it could embody,” says Seavitt. “He made us realize that architecture was a thing—almost alive—that responded to gravity and the horizon. Yet you could make it float.”

Seavitt says that Cooper Union was special because it was intellectually stimulating without being self-absorbed in its intellect. “It was obsessed with precision and craft, but not craft for craft’s sake—rather, precision as a means to transcend reality and carry meaning,” she says. “It emphasized the timeless over the fashionable. It rejected typology and embraced the invention of the new and the unknown. It was about architecture on a completely different plane from that which I had previously understood.”

For two summers—after fourth year and again after thesis year—Seavitt worked in Abraham’s studio. At that time, Abraham had just won the competition for the Austrian Cultural Institute (now called the Austrian Cultural Forum). She drew plans and multiple sections of the building by hand, and also built two models—one of which was shown at New York City’s MoMA in a preview exhibition and is now at the Museum of Applied Arts in Austria. “One of my strongest impressions was watching Raimund as we worked on a competition for the bank in Lienz, Austria, his hometown,” says Seavitt. “He sat at his desk building a little study model of the form of the building, cutting it, transforming it, smearing spackle on it. He didn’t say a word. He sat there for hours, working. When he was done, he got up and said, ‘Okay, I’m going to go feed my cats.’ That little model was beautiful. Raimund is without a doubt the finest architect I have ever known, and I’m honored to have had the opportunity to work with him.”

After graduating from Cooper Union in 1994, Seavitt would go on to earn a Master of Architecture from Princeton and work in the Paris office of Peter Rice, RFR, and the New York office of Pei Cobb Freed and Partners. After teaching at Cooper Union for a year, and seeking to develop her “inner landscape architect,” Seavitt received a Fulbright grant to study the work of the Brazilian landscape architect Roberto Burle Marx.

“Burle Marx’s work is fascinating,” she says. “I’m particularly interested in his public parks—these are absolutely beautifully designed, but he is not just a formalist. He really understood plants and plant ecology, and was truly ahead of his time in terms of ecological thinking. He conceived of the public work as being a pedagogic benefit to society at large—he really believed that people would learn about their own culture, and begin to respect and valorize nature, through immersion in their native flora.”

When she returned to New York in 2002, Seavitt opened her own office, Catherine Seavitt Studio, and resumed teaching at Cooper Union, a position she would hold through 2006. Today, she teaches at Princeton and City College (where she received a bachelor’s in landscape architecture in 2007) and lives on Manhattan’s Upper East Side with her husband and two sons, Sébastien, 5, and Pierre, 3. 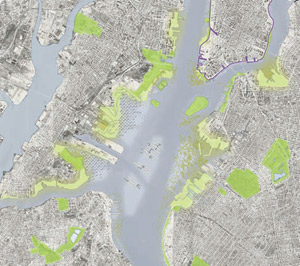 The Palisade Bay project grew out of a proposal for the Latrobe Prize, the two-year grant awarded by the Fellows of the AIA to fund interdisciplinary research projects. Combining their interests in engineering, infrastructure, landscape and climate change, Seavitt, Nordenson and Yarinsky decided to look at the Upper Bay as a focal point of theNew York-New Jersey region, and then to consider how it might be affected by projected sea level rise, and, to a greater degree, storm surges. “With sea level rise and warming oceans,” says Seavitt, “the predictions are that hurricanes will be more intense and occur more often—and of course, the storm surge would be taking off from a higher initial sea level, leading to more intense flooding and damage.”

Reflecting on her work in Rome, Seavitt thought about how responses to flooding could transform a city—for better or worse. She says that many hard infrastructural responses simply don’t work, are environmentally irresponsible, and are quickly outdated. “Responding to this,” she says, “we developed the concept of soft infrastructure, which involves incremental, multiple and iterative strategies operating at the fluid boundary of land and water to absorb flooding and attenuate wave energy. “It’s very different from the hard infrastructure of an impervious sea wall or storm surge barrier, which is a decisive limit between water and land.We like to think in terms of gradient, slope, crenellated edges and absorbent surfaces, about reducing wave energy, instead of attempting to eliminate flooding entirely. This can be done with reefs, artificial archipelagos and wetlands.” Also interested in using the bay as a way of producing clean energy, the team proposed windmills, tidal turbines and areas of algae aquaculture to produce green bio fuel.

For the Rising Currents exhibition, four teams of young architects, landscape architects and engineers with at least ten years of experience were selected from a pool nominated by academics, deans and prominent practitioners. Yarinksy’s firm, Architecture Research Office, joined as a fifth team. Over eight weeks, each group produced detailed projects for five sites around the bay. 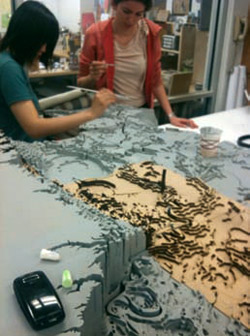 For Lower Manhattan, for instance, the design plan includes elevating the coastline by “incorporating the existing vertical seawalls into a new topography that surmounts them;” a matrix of islands formed from dredged material that create a reef-like barrier to break up waves before they reach land; and breakwater towers adjacent to ferry terminals and navigation lanes.

“The work produced by the teams is really fantastic, and the exhibition itself is astounding,” says Seavitt. “I think it has really raised the level of awareness of the issues of climate change in New York, and policy makers and city officials have taken notice. We’ll see how this affects change in the future—I think we’ll see a strong impact.”

Along with the MoMA exhibition, the Palisade Bay research was displayed at the 12th International Architecture Exhibition at the Biennale di Venezia in Italy from August through November, 2010.The Biennale also included Seavitt’s research, in collaboration with the Louisiana State University’s Coastal Sustainability Studio, examining the possibilities of land building at the Mississippi Delta through the use of new diversions of the river to the Gulf Coast. Both the Palisade Bay and the Mississippi Delta exhibits feature large models that, according to Seavitt, “reveal the ground, both above and below the water, as a continuous surface by suspending a volumetric representation of the water, chandelier-like, over that ground.”

“I really enjoy the research work that we do, which so often leads us into directions we never imagined,” says Seavitt. “This manner of working, I believe, grew out of the education that I got at Cooper Union. I’ve taught in a lot of places, and seen a lot of pedagogic models. But what makes the architectural education at Cooper unique, and what has really influenced the way I teach, is the self-directed quality of the studio method, and the necessity of invention. Every studio, from first year through the thesis, is really like a thesis project—you have to figure out the problem that is your focus, and then, using your architect tool kit, solve it.”