Change has been happening in the Faculty for Humanities and Social Sciences. Some of it was planned; some not so much. Some happened from the top down; some from the grass roots. But it began in the Fall of 2018 when students actively drew attention to what they saw as shortcomings in the HSS program and faculty. Part of a larger national upsurge at higher educational institutions, the movement has come to be called, at Cooper and elsewhere, “decolonization.” Among other responses, the administration created a Diversity Task Force, to supply recommendations. Additionally, a body of students, faculty and administrators, the Council on Shared Learning, are trying to determine what the shared experiences at Cooper should be, a nexus that HSS has always occupied. In the midst of the student groundswell, HSS Acting Dean Peter Buckley’s term was reaching its non-renewable two-year end point. So, at the beginning of the 2019-20 academic year, Professor Anne Griffin was elected by the faculty as the new acting dean. Joining her would be Nada Ayad, a 2017 post-doctoral fellow, returning after a year-long stint at FIT, in a new(ish) position as HSS assistant dean.

Griffin and Ayad, in spite of being two generations apart and from wholly different backgrounds, make a congenial and complementary team. They sat down together in Griffin’s office – Griffin upright on a couch with a freshly brewed cup of coffee, Ayad in a chair with shoes off and legs tucked under her -- to talk about the past, present and future of HSS. Griffin, a political scientist who has taught at The Cooper Union since 1978, grew up “in the shadow of Columbia” where her mother was in the Barnard administration while her father practiced law. Ayad, born in Kuwait to a businessman father and pediatrician mother, returned to her parents’ native Egypt as a baby, then, at the age of 13, moved again, this time to California. There, after learning to speak English, she developed an interest in language and translation, earning her degree in comparative literature focusing on Egyptian women’s political texts during the last 100 years. With a common interest in examining power they are poised to continue the work of revisiting the HSS curriculum. 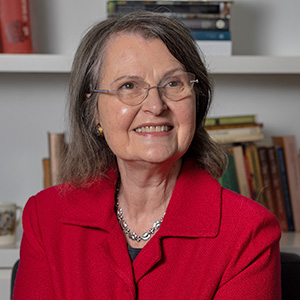 How did you both wind up in your current positions?

AG: I think that, during a conversation with Peter Buckley last year, I said, “If you don’t want to continue this, I’ll do it.” And the next thing I know he has recommended me to the president as his successor. Then there was a faculty vote.

NA: While I was here as a post-doc I told everybody I loved being here and hoped I could stay. But there was no position open. So, I went to FIT.  But once this became available, I was thrilled to apply. I am really happy to be back.

Is Assistant Dean a new position?

AG: While sorting through papers in this office I discovered, to my surprise since I did not recall this fact, that there was an assistant dean many years ago. It was associated with a language program. Both the program and the assistant deanship were eventually phased out.

As assistant dean, what are you tasked with doing?

NA: My particular assignments can change. There are various challenges that I am cultivating the skills to deal with. Currently, there are three tenets to my position. One is to work with the dean and support her and the faculty. Another is to decolonize on several levels. Curriculum is one, but also culturally, and pedagogically. The third is to make HSS more interdisciplinary and more central to the schools. That includes thinking of ways to implement the recommendations of the diversity task force created last year.

Were you surprised by the student movement for change and decolonization that began last year?

AG: At first it was poorly understood. Even now I don’t think I would be doing my job if I claimed to understand everything that is going on. It is a continuing conversation. As far as certain topics are concerned, at first I felt, perhaps, rather sad that my students wouldn’t share the same enthusiasms about the same topics that I have. But actually, I haven’t found that to be the case. Instead I found that we had some of the best conversations and discussions I’ve ever had. In fact, that made it a little bit easier to leave the classroom and take up these different duties as dean. Last Spring’s classes were so good that I really felt like, this is really the top. It seems the movement energized students in a way. I love having a certain tension in the classroom and using it productively.

NA: I was not here for the start of the movement, but it did not surprise me. I knew that students were really politicized and invested in their education. One of my favorite things about Cooper students is that they question authority.

How would you characterize the movement of “decolonization?” How is it different from the diversity movement? 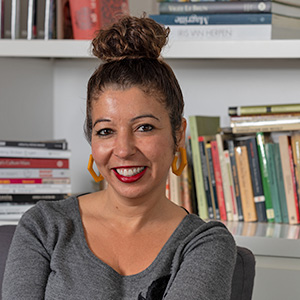 NA: Interest in “diversity” starts in the 1990s and is an effort to include people of color in these systems that are Eurocentric. So, diversity means you have a faculty or a department that does work on Europe and the west and includes a few faculty members of color. Decolonization is different, and mostly misunderstood. It’s a political term, of course, that was coined in the 1950s and 60’s in reference to very literal decolonization. But since then it has had different iterations. Even if colonialism might be seen as having happened in the past, its structures are very much still present, and invisible. Now the charge of decolonization is to interrogate these systems, these structures of power. What happens with some diversity initiatives is that the structures are the same, but you might have people as tokens in it. Decolonization is more of a structural investigation where the actual systems that allow this kind of hierarchy to happen are interrogated and questioned and critiqued and hopefully not repeated. So, part of decolonization is to look back at the history.

How has HSS and The Cooper Union responded to this movement?

AG: We are working very hard on concrete changes as a result of the movement. For one thing, we are trying to introduce more courses that reflect a global perspective and other types of diversity as well. If you look at our course offerings for this semester and next you will see they are quite different from several semesters ago. We are also trying to recruit more people of color as adjuncts and are looking forward to doing so with the full-time faculty as well.

NA: Decolonization is now an important process in higher education. Cooper is not an island in this way. It has to go through the same process as in other schools. Because people have different definitions of decolonization, I am working with the faculties of HSS and the other schools on an institution-wide definition process. We are soliciting people’s stories about the movement last year and their definitions of decolonization. I am also hoping to invite others from programs that have successfully decolonized to learn from them and maybe model our program after that. The decolonization movement is taking up all of my energy, with tremendous support from Anne. The movement has to be non-hierarchical. It has to be transparent. It has to be de-centered and multiple. The point is not to decenter the West and then re-center another narrative. It has to be a multiple and poly-vocal movement. So, I am very much trying to engage students who are for it, faculty who are against it, and have all voices represented. The process is the most important part for me, which takes time.

Is there a timeline for finding a permanent dean for HSS?

AG: Not at this time.

Will you be staying on for the second year?

AG: I prefer not say if I will be here for one or two years. It depends. But under the contract you can be acting dean for up to two years. It’s nonrenewable.

Do you have any goals for your time as dean?

AG: One thing we are trying to do is imagine what this faculty will look like in another twenty years. When you consider that someone can remain on the faculty for up to forty years, who we hire today will very possibly still be here for years to come. So, thinking about our faculty needs in the future is a challenge. We are trying to just imagine what the fields would be like. And all of this is in the unique context of having students focused primarily on art, architecture and engineering. Will there be any changes in that? How might we build that in? We are trying hard to imagine an education in the future and how we can serve our students. Notice how I didn’t say, “serve the three faculties.” Another thing I am trying to do is move HSS beyond the position of a service faculty. There are still a lot of people here who think of us that way. I would like them to think of this as, yes, relevant, but not relevant, specifically to their courses. I would like students to think of this as special space. As an opening to the world. An opening to citizenship, to intellect, even perhaps to recreation. And they might find something new and different that would open new vistas.

NA: Some students already say that.

AG: Yes, but I’d like to make this for everybody.

NA: It’s an exciting time. A lot is in transition.

There’s a lot of positivity in this room.

NA: Because otherwise what are we going to do? How do you get up in the morning? How is there going to be change?

AG: If there isn’t going to be a challenge, what’s the point?