Continuing its reputation as a premier venue for major artists, curators and intellectuals to teach, the School of Art welcomes Carolyn Christov-Bakargiev as Menschel Visiting Professor for the Spring 2013 semester. Christov-Bakargiev, an internationally acclaimed curator and art historian, most recently curated the dOCUMENTA (13) exhibition in 2012—one of the world’s largest and most prestigious international exhibitions of contemporary art.

“After dOCUMENTA (13) I decided that it was crucial to spend time with others thinking through many issues and questions that were raised in the course of that project,” Christov-Bakargiev writes via email, "And what better place to do that than The Cooper Union, a university that I have always admired for its radical and intelligent faculty, students and alumni."  Christov-Bakargiev wrote to us on her way to Argentina, where she was headed to work on a book project with artist Adrian Viller Rojas before arriving in New York to begin her term at Cooper.

Christov-Bakargiev was invited to Cooper Union by School of Art Dean Saskia Bos. “I have known Saskia for many years, since her time at de Appel,” Christov-Bakargiev writes, “and have had many engaging conversations with her. She also worked on the dOCUMENTA directed by Rudi Fuchs in 1982, so we have had the opportunity to discuss its history and its challenges together.”

“Carolyn is one of the most vibrant and inspiring curators in the world of contemporary art today,” says Dean Bos, adding that “her in-depth knowledge dates back more than 25 years of research into the practice of many key artists around the world. Her interests in other fields have meanwhile grown as she widened her scope through artistic collaborations and her publications—which always manage to stay clear of any form of jargon.” 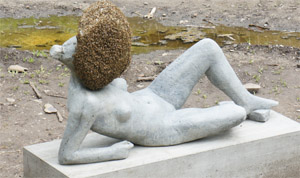 Organizing a dOCUMENTA, which only occurs once every five years and takes over the entire city of Kassel, Germany, represents the apex of a curator's professional achievements; Christov-Bakargiev’s tenure was particularly successful. The 2012 edition—which included a number of Cooper faculty and alumni—attracted 110,000 more visitors than its predecessor in 2007. It also launched an ambitious publishing program and satellite exhibition sites in Kabul, Afghanistan; Banff, Canada; and Cairo, Egypt. The exhibition solicited much critical attention and praise from the art world and academic critics as well as the popular press.

At Cooper Union, Christov-Bakargiev will be teaching a course titled "Contemporary Art Issues" along with Associate Dean of Art Steven Lam. Structuring six lectures on the topic of artistic practice as a form of commitment and engagement with the world, Christov-Bakargiev’s class examines art in a context that looks beyond the confines of the studio or exhibition space. Christov-Bakargiev will be using published material and documentation from dOCUMENTA to examine class topics, bringing the Cooper Union student community in dialog with the seminal international exhibition, as well as timely developments and conversations happening in the world of art.

“Carolyn not only brings an in-depth knowledge of contemporary art—what it is, what it can be,” Lam writes in an e-mail, “but her imaginative thoughts regarding so many issues such as politics, social history, cross-species worlding, cognitive capitalism and its discontents, precariousness…  as well her commitment to social justice and feminism, will contribute to a lively, vibrant, and enriching experience.”