Siddhartha Deb, "Fiction, Utopia, Dystopia: Writing at the End of the World" 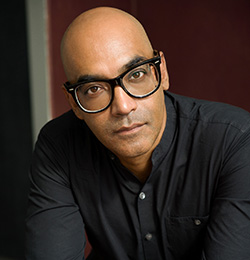 What can fiction do when the historical past dissolves into fake news and the future comes in different shades of dystopia? How can writing engage with the convergence of authoritarianism, climate change, and diminishing freedom, individual and collective, that has become the most prominent feature of our lives? How do we find a future when caught in this universal, end-of-the-world present?

Born in north-eastern India in 1970, Siddhartha Deb is the author of The Beautiful and the Damned: A Portrait of the New India, a narrative nonfiction book that was a finalist for the Orwell Prize in the UK, winner of the PEN Open award in the United States, and published without its first chapter in India because of a court order. A columnist for The Baffler, The New York Times Book Review, and a contributing editor to The New Republic, Deb’s journalism, essays, and reviews have appeared in The Guardian, n+1, The Nation, Dissent, and The Times Literary Supplement. He is the recipient of grants from the Society of Authors in the UK and the Nation Institute and fellowships from the Radcliffe Institute of Advanced Studies at Harvard University and the Howard Foundation at Brown University. He is working on a novel set in South Asia.