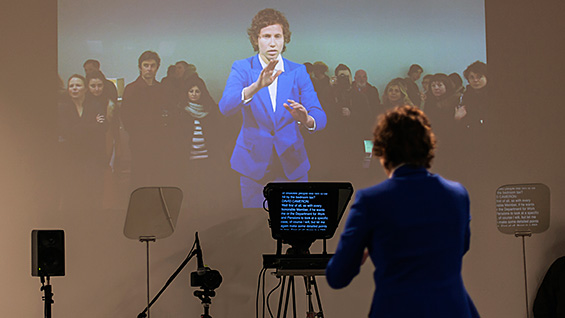 Ariel Freedman in a production still from 'Stand Behind Me' (2013) by Liz Magic Laser, Lisson Gallery, London

Liz Magic Laser’s performances and videos intervene in semi-public spaces such as bank vestibules, movie theaters and newsrooms. This free, public lecture will focus on her recent work examining the techniques of news production and the studied gestures of politicians. By using television news as theatrical dialogue, Laser confronts us with the mechanisms at play in the presentation and reception of current events.

Liz Magic Laser is a video and performance artist based in Brooklyn. She earned a BA from Wesleyan University (2003) and an MFA from Columbia University (2008); and she attended the Whitney Museum Independent Study Program (2009). She has had recent solo exhibitions at Paula Cooper Gallery, New York (2013) the Westfälischer Kunstverein, Münster, Germany (2013); DiverseWorks, Houston, Texas (2013); Various Small Fires, Los Angeles (2012); and Mälmo Konsthall, Mälmo, Sweden (2012). Her work has also been exhibited at Lisson Gallery, London (2013); the Moscow Museum of Modern Art (2012); the Performa 11 Biennial, New York (2011); the Biennial of Graphic Arts, Ljubljana, Slovenia (2011); and MoMA PS 1, New York (2010). Laser is the recipient of grants from Alfried Krupp von Bohlen und Halbach Foundation (2013), the Southern Exposure Off-Site Graue Award (2013), New York Foundation for the Arts Fellowship (2012) and the Franklin Furnace Fund for Performance Art (2010).

Liz Magic Laser appears as part of the Interdisciplinary Seminar, created as a discussion series on artistic practice for the students of the Cooper Union School of Art and the creative community that surrounds them. Lectures are free and open to the public.