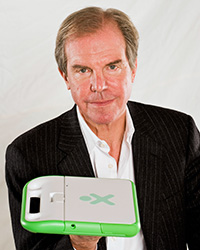 Nicholas Negroponte is founder and chairman of the One Laptop per Child non-profit association. He was co-founder and director of the MIT Media Lab, and the Jerome B. Wiesner Professor of Media Technology. A graduate of MIT, Negroponte was a pioneer in the field of computer-aided design, and has been a member of the MIT faculty since 1966. He is also author of the 1995 best seller, Being Digital, which has been translated into more than 40 languages. In the private sector, Negroponte served on the board of directors for Motorola, Inc. and as general partner in a venture capital firm specializing in digital technologies for information and entertainment. He has provided start-up funds for more than 40 companies, including Wired magazine.