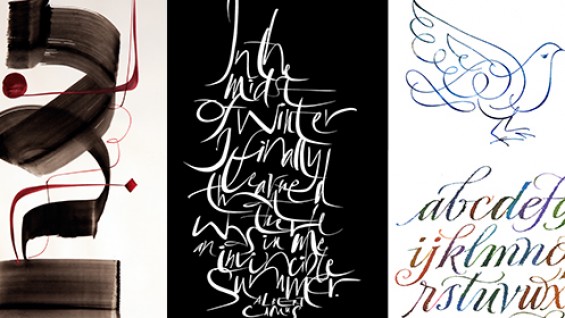 A free, public lecture by John Stevens that looks at the thematic visual elements and relationships of letterforming from a craft and image-making perspective. Although great skill is required for the best calligraphy, one can get lost in the minutiae. Thinking in terms of visual language (not forgetting content) frees us to say what we really want to say or express. RSVP requested.

John Stevens is one of the most gifted and original letter artists on the international scene, renowned for his skill as a calligrapher, letter artist, and designer. Starting as a sign painter in New York, his insatiable inquiry into letters and their design led him into calligraphy and lettering as image, working with various pens, brushes, and later computer. By his mid-twenties, he had many nationally known clients in publishing, packaging, advertising, television, and film.

John's work has graced book jackets, magazines, newspapers, libraries, museums, and churches. As an in-demand teacher, he has been invited to teach at many national and international letter-arts conferences throughout the United States, Europe, and Asia to teach his art.  John's calligraphic artworks are included in the collections of the San Francisco Public Library; Berlin’s Akademie der Künste; and La Casa del Libro (San Juan, Puerto Rico), as well as in many private collections. People can easily find his works in dozens of books and publications from Asia, Australia, Europe, and the U. S. A. More recently, his book Scribe: Artist of the Written Word was published in 2013 to critical acclaim.