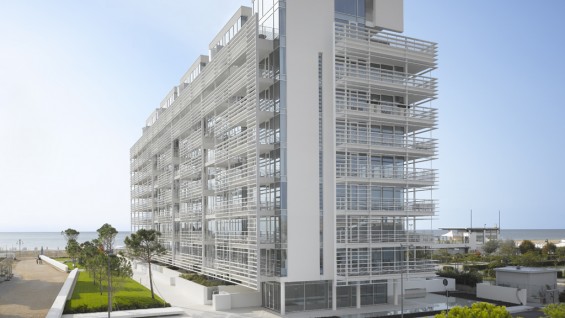 Each year The Architectural League in its Current Work program presents the work of significant international figures who powerfully influence contemporary architectural practice and shape the future of the built environment.  Richard Meier will present his work in a public lecture to be followed by a conversation with a moderator and fellow partners  Bernhard Karpf, Reynolds Logan, and Dukho Yeon in honor of fifty years of independent practice.

Richard Meier founded his New York City based firm in 1963.  His practice has completed commissions worldwide that range from civic structures, museums, and corporate headquarters, to housing and private residences.  From early projects – including the now iconic “white” houses, such as the Smith House in Darien, and institutional projects beginning with the Bronx Development Center – to the Getty Center in Los Angeles or Rome’s Ara Pacis Museum and Jubilee Church, Meier and his partners continue to embody the accolades of the Pritzker Prize citation almost thirty years ago, that, in his “single-minded pursuit of the essence of modern architecture…he has broadened its range of forms to make it responsive to the expectations of our time.”

Recent projects completed by Richard Meier & Partners include the Arp Museum in Germany; the OCT Shenzhen Clubhouse in China; the Broad Art Center at UCLA; and United States Courthouses in San Diego and Islip, New York.  Currently under construction are offices in Rio de Janeiro; a hotel complex is Jesolo, Italy; a residential tower in Tel Aviv; a resort in South Korea; two residential towers in Tokyo; and the first phase of a master plan for downtown Newark.

Among the many individual international honors Richard Meier has been awarded are the Pritzker Prize, AIA Gold Medal, RIBA Gold Medal, the Praemium Imperiale from the Japanese government and a Commander of Arts and Letters by the French government.