The Border is a Way of Seeing 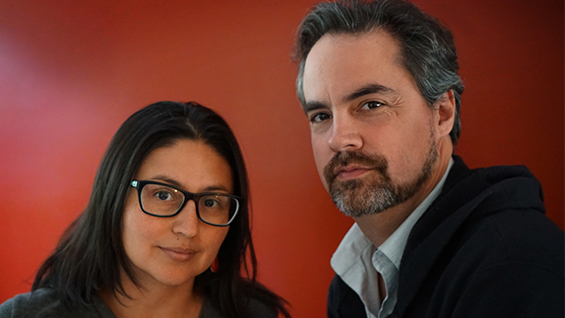 This free, public lecture subtitled, "Moving Image Interventions Along and Beyond the U.S./Mexico Border," is part of the Intra-Displinary Seminar (IDS) lecture series.

For borders to be enforced as sites of social and material control, there must always be an accompanying system of visual production. Today that system includes drones, infra-red cameras, biometrics, and more. For over twenty years, filmmakers Alex Rivera and Cristina Ibarra have been making moving images to contest those systems with visions of a different kind of border. The articulation of a philosophy of film is the premise of their presentation. It will include the opportunity to discuss research and methods explored in the making of their film, The Infiltrators (2019), which was screened earlier as part of the Spring 2020 IDS Lecture Series.

Alex Rivera is a filmmaker who’s been telling ground-breaking Latino stories for more than twenty years. His first feature film, a cyberpunk thriller set in Tijuana, Mexico, Sleep Dealer, won multiple awards at Sundance and was screened around the world. Rivera’s second feature film, a documentary/scripted hybrid set in an immigrant detention center, The Infiltrators, won both the Audience Award and the Innovator Award at the 2019 Sundance Film Festival and will be released theatrically in the U.S. in 2020. Rivera’s work has been supported by the Ford Foundation, the Tribeca Film Institute, the Open Society Institute, and many others.

Cristina Iberrais a Chicana border crosser and an award-winning independent filmmaker with roots along the Texas/Mexico border. Her new film, The Infiltrators, a hybrid documentary and scripted narrative, received the NEXT Audience and Innovator Awards at this year’s Sundance Film Festival. The New York Times calls her previous documentary, Las Marthas, “ a striking alternative portrait of border life”.  It premiered on Independent Lens in 2014 and was awarded the Best US Latino Film by Cinema Tropical. USA Today describes The Last Conquistador, her feature documentary collaboration that premiered on POV in 2008, as “Heroic”. Her directorial debut, Dirty Laundry: A Homemade Telenovela, was broadcast on PBS. Cristina Ibarra is a 2019 Soros Art and a Rauschenberg fellow.