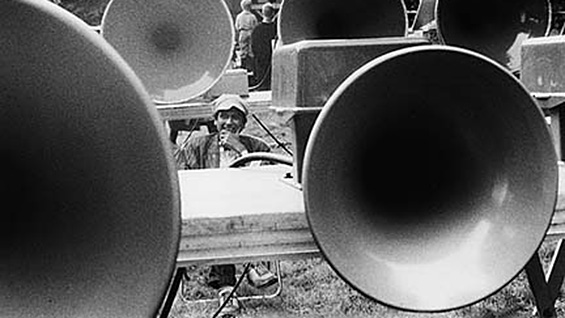 In a free, public lecture, composer Alvin Curran will present an overview of his large-scale ambient sound-installations with an emphasis on the visual and dynamic elements that have now become common practice in the area of Sound Art.

Democratic, irreverent and traditionally experimental, Curran travels in a computerized covered wagon between the Golden Gate and the Tiber River, and makes music for every occasion with any sounding phenomena -- a volatile mix of lyricism and chaos, structure and indeterminacy, fog horns, fiddles and fiddle heads. He is dedicated to the restoration of dignity to the profession of making non-commercial music as part of a personal search for future social, political and spiritual forms.

Curran’s music-making embraces all the contradictions (composed/improvised, tonal/atonal, maximal/minimal...) in a serene dialectical encounter. His more than 150 works feature taped/sampled natural sounds, piano, synthesizers, computers, violin, percussion, shofar, ship horns, accordion and chorus. Whether in the intimate form of his well-known solo performances, or pure chamber music, experimental radio works or large-scale site-specific sound environments and installations, all forge a very personal language from all the languages through dedicated research and recombinant invention.

Alvin Curran appears as part of the Interdisciplinary Seminar, created as a discussion series on artistic practice for the students of the Cooper Union School of Art and the creative community that surrounds them. Lectures are free and open to the public.